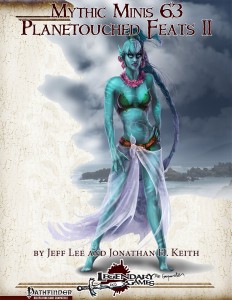 -Airy Step: +4 to saves versus air/electricity spells and effects; ignore the first 30 ft. of falling;Spend 1 mythic power as an immediate action for 1 round of air walk.

-Aquatic Ancestry: +20 ft. swim speed; double darkvision range while underwater. If you have deepsight, instead increase darkvision by +60 ft. Spend 1 mythic power to double your swim speed for one round.

-Hydraulic Maneuver: +1/2 tier to CMB with hydraulic push. Spend one mythic power to detract Dex and dodge bonuses from your target’s CMD.

-Inner Breath: +2 to saves vs. inhaled poisons. Spend 1 mythic power as a full-round action that provokes AoO to end all effects of poisons, clouds, etc. affecting you or an adjacent ally. If within the area of such an effect, instead you can disperse 10-ft. cube of such an area per 2 mythic tiers you have, minimum 1. I do like this one, though I wished it would specify whether damage-dealing clouds etc. like volcanic bursts qualified.

-Steam Caster: Don’t increase casting time and use it in conjunction with SPs and SUs. The resulting obscuring mist lasts for 1 round, + tier rounds for mythic power. When expending mythic power, your steam also deals spell level fire damage to all creatures entering or beginning their turn in the area, save vs. the spell’s DC (or as though it had a DC) negates.

-Triton Portal: Use hydraulic push to cast lesser planar ally or dimension door, but you can only do so while immersed in water; the destination must also be submerged; At 6th tier, spend 2 mythic power to instead shadow walk, but instead use the elemental plane of water, requiring the ability to breathe water while transitioning. +1 use per day powered by mythic power. Generally solid, though in some campaigns, significant differences between plane of water and material plane may be problematic; unlike the plane of shadow, it is not generally considered to resemble the prime material plane. A minor nitpick, but something GMs should be aware of.

-Water Skinned: Extinguish 5 ft of fire as a swift or move action. Extinguish a 5-ft cube as a standard action; a 10 ft-cube or a 4-ft-cube of magical fire for mythic power, as a dispel based on level + tier. Interesting

-Wings of Air: +10 ft fly speed; +10 ft more per tier. If you are affected by an air/electricity effect, spend mythic power to temporarily gain SR 15 + tier versus such effects. Okay.

Jeff Lee and Jonathan H. Keith deliver a solid array of mythic feats, with some being pretty unique – more so than I expected them to be. While there are some minor quibbles I could field and some fringe-cases wherein a slightly increased precision would have helped, all in all, this is a cool, solid array of options that actually extends the options available rather than just going for numerical escalation, thus being well worth of a final verdict of 4.5 stars, rounded up to 5.