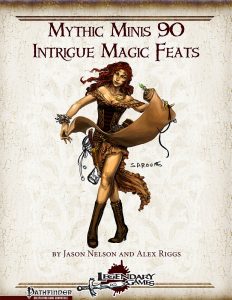 -Cartogramancer: Find a location within 50 miles; if you exceed the DC by 10, 20 miles instead; if you exceed the DC by 20, you can narrow that down to 5 miles. Additionally, you may expend mythic power as part of making the Knowledge (geography) check, you receive 3 locations at roughly the appropriate distance instead of one. If you fail the check, you retain the mythic power.

-Conceal Spell: You add mythic tier to the DC to notice your spellcasting, regardless of skill used to set the DC. If you have (Mythic) Skill Focus in the respective skill, you increase the DC by 2 or 4 respectively. Said DC-increase also extends to Sense Motive. When expending one use of mythic power as part of casting the spell, you do not increase the casting time. Neat!

-Improved Conceal Spell: Add mythic tier to Spellcraft DC made to identify your spell as it’s being cast. You may also add a surge die to the DC, which you may roll btw. twice when casting a mythic spell. Additionally, expend mythic power to make it undetectable to divination unless the snooping character manages a massive DC-check. Nice one!

-Fleeting Spell: Dismiss these spells as a free action and it retains the normal duration. You may also cast 1 round duration spells as fleeting spells and add mythic tier to the DC to detect a lingering aura or identify its school. Mythic spells thus cast can be dispelled by mythic effects sans checks. Non-mythic dispelling can end them at -4 dispel DC, balancing the power of the feat. Cool!

-Planar Wanderer: + twice mythic tier to Knowledge (planes) checks made in conjunction with Planar Wanderer. Expend mythic power when plane shifting to determine destination, as though you used teleport to get there.

-Studied Spell: When you cast a studied spell, you designate + 1 target for every 2 tiers (minimum 1). Single targets instead net you + tier to the Knowledge check to study it. If the target grants itself resistances, immunities or DR, you can free action identify the highest level spell or effect, plus 1 per 5 by which you beat the DC. Then, you may choose to ignore one such effect, but only with the studied spell in question. This is an amazing little piece of engine design that can really help reign in the powerful defenses…also those of players…

-Stylized Spell: + tier to the DC of Knowledge (arcana) or Spellcraft made to identify your spell, its effects, materials or created things, as well as to the DC to recognize your magical signature. You can also disguise the stylized spell as another spell of the same school and subschool with the same descriptors of any level, or as another spell of the same level and school with a different subschool or descriptor. VERY cool!

-Tenacious Spell: The DC to counter or dispel the spell in question is increased by 4 rather than 2; When used with a mythic spell, non-mythic attempts to dispel or counter it suffer a -2 penalty. If a tenacious spell is dispelled, it lingers for 1d4 + 1/2 tier rounds. The latter, frankly, can be pretty OP, considering the average length of combats.

Jason Nelson and Alex Riggs deliver some pretty cool magic feats here; there are several options herein I’d consider must-owns or at the very least neat scavenging material even beyond the mythic context. Fleeting Spell’s balancing mechanics are glorious…but at the same time, Tenacious Spell’s mythic iteration is problematic in my book. Hence, this does miss my seal of approval by a slight margin, making it clock in at 5 stars.

You can get these nice mythic feats here on OBS!