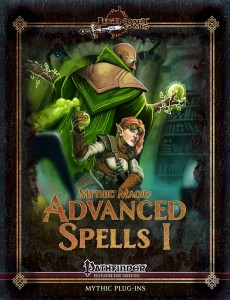 At this point, I assume you are familiar with the basic premise of the mythic magic-series – essentially, we receive all those delicious spells that are not included in the original Mythic Adventures hardcover in their mythic versions, with each book covering quite a bit of ground – this one taking perhaps THE defining Pathfinder book, the APG. No other book has for me coined a distinct, unique identity for Pathfinder more than the APG – it turned Pathfinder from 3.75 into a proper, truly distinct system.

The pdf kicks off with an alphabetical spell-list – one that is 4 (!!!) pages long. Yeah, that ought to provide some inkling of what to expect here! Well, let’s take a look at the very first spell herein, absorbing touch: The mythic version allows you to absorb magic items and via the first augment, even use them while they are absorbed if their powers are continuous and independent of the physical interatcion – i.e. not rope of climbing-abuse; Wands etc. use up twice the charges, making for a cool caveat. On a very nitpicky side, the wording could benefit from having “wand” generalized to encompass staves and other charge-using items.. On the “awesomecake”-side, the second augment allows you to absorb willing or helpless creatures – extractions, rescue missions and kidnappings have just become much more awesome – when a spell allows for new storytelling mechanics, you know you’ve stumbled across something cool!

Of course, not all different mytic versions receive such a wordy, complex upgrade – there simply is no need. Accelerating all poisons instead of one? Yeah, works! Now alchemical allocation allows you to spit a potion or elixir back into its container without consuming it, but at the cost of 1/2 durations of subsequent sipping from the potion. Like it! Are you commanding a fleet? Alter Winds can be now augmented to affect a radius of one mile…just sayin’…

Add maximized and empowered effects to your extracts also makes for a nice, crunchy upgrade. One of my player’s favorites, ant haul, now has mythic tier added to the effective str-score for carrying capacity. Less traightforward, the additional options for metamagic feats provided by arcane concordance deserves special mention – neat! Ball lightning, per se a non-too-interesting spell, via this book, suddenly becomes unique, adding electromagnetic properties for mythic power at 5th level to the array for unique, cool benefits. Speaking of which – Blood Biography is investigation module gold – what is your home, asking for immunities/resistances and information on kin can be gleaned – and that’s not where the improved version ends. G-L-O-R-I-O-U-S. If you require inspiration on how to craft a whole module around this spell, drop me a line…

But not all spells tie in with story-telling or simply increase numerical values – there is another class of spells herein that ties in with proper class abilities – take Coward’s Lament: Not only does it tie the reset of penalties incurred by the base spell to a will-save, it also increases an inquisitor’s judgments in potency by the penalty AND upgrades your bane attacks to greater bane. This level of ability/spell-synergy makes for rather cool combo-potential and further helps set apart exclusive spells for certain classes, increasing the uniqueness-factor of the options available for them. Formerly subpar options like the divine transfer of the paladin have their mythic version increase the potency and thus render the spell as such much more viable, even before the further augmentation – which allows you to breath of life deceased targets – pretty cool and thematically fitting!

Speaking of further distinctions – each element that can be chosen via elemental touch comes with its own distinct additional effects, lending more tactical depth to element selection as well as distinction for different specialists that prefer one element over another. Fester‘s mechanic, which decreases non-SR healing by 50% + 5% per mythic tier may seem a bit clunky mechanics-wise, but the pretty awesome result makes up for the slightly math intense formula. (I am assuming you can’t calculate 55% of your cleric’s channel in your head – while I’m pretty good at math like that, I’ve seen games slowed by formulas like this, so yeah – a slightly less complicated one that increased 2 to 75% and 100% respectively would probably have been more user-friendly…)

On the cool side – what about using mythic power to scry those subject to your follow aura spell? Yes, I can see the vast potential for espionage and similar action here… Flanking with foe to friend‘d characters also makes for quite a cool combo that adds a bit of tactical depth to the whole scenario. Action economy also receives some interesting tactical modifications – take frozen note, which allows its maintenance while 5-foot-stepping. Another cool design decision would pertain creature qualities interacting with spells – take e.g. geyser – those creatures with the burn quality hit by it may have their abilities suppressed. Another cool component would be spell-terrain-synergy – adding heavy undergrowth or dense rubble to hide campsite would be just what the doctor ordered! What about selectively greased lily pads that send your foes into the pond, while you and your allies escape?

Purging Finale also is interesting – by ending a bardic performance, a negative condition can be removed – awesome concept and if you like it, might I suggest the maestro class’ outros? Eidolon rejuvenation-spells have also been expanded, with options to decrease hit point healing and instead heal negative conditions/ability damage/drain. Rest Eternal also has yet another unique option available – as long as you have the spell prepared, you can utilize mythic power to spontaneously cast it on yourself, preventing you from joining the undead legions, potentially even ignoring the material components! Mythic Slipstream lets you ignore caltrops and similar impediments and can be discharged for a massive tier-dependent movement rate bonus and even mobility-like bonuses.

Editing and formatting is very good, better than in Ultimate Spells I – while I noticed a couple of minor bolding glitches, nothing particularly serious came up. Layout adheres to Legendary Games’ two-column full-color standard and the pdf’s artworks are nice, though fans of legendary games may recognize them from previous supplements. The pdf comes excessively bookmarked, though with weirdly a list of a couple of spells before the proper bookmarks in alphabetical order begin – something seems to have gone slightly awry there, though this does not impend functionality. It should be noted that this pdf is excessively hyperlinked to d20pfsrd.com – each and every spell has a link to help you run this – kudos for going the extra mile, also with e.g. terrain peculiarities hyperlinked etc.!

Jason Nelson, Jeff Lee and Morgan Boehringer have crafted a vast array of mythic spell-upgrades for perhaps the most crucial base book among the PFRPG hardcovers released so far – and this book delivers. While there are slightly more numerical-increase mythic adaptations herein than in the last mythic magic-book, that is also due to the significantly higher page-count. Let’s cut to the chase – this is absolutely non-optional. If you run a mythic campaign that is not core-rulebook + MA only (and why would you?), there’s simply no way past this pdf. Not only are *many* spells downright inspired in their synergy and uncommon improvements, they belong to what amounts to the very basic minimum rulekit one expects – or at least I do, from a campaign. Instead of just delivering a default job, the designers have went above and beyond the first two Mythic Magic-installments to make this book and its spells stand out, feel distinct and most importantly, diversified them. Instead of simply going into the depth, many options herein go into the breadth, enriching the game rather than simply adding numerical escalation.

This is a required book for any mythic campaign; and yes, it has slightly more glitches than I like to see, but no game-breakers – and that, alongside its sheer creativity and breadth, are what makes this stand out. It’s not perfect, but for such a straightforward topic as “make mythic spells of all of these”, the designers have managed to retain a freshness and playfulness that suffuses these pages and makes the read inspiring – it may not be perfect, but I quite frankly don’t care in the face of creativity like this. Final verdict: 5 stars + seal of approval.

You can get this all but required book here on OBS and here on d20pfsrd.com’s shop!