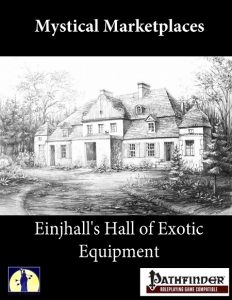 The second installment of Flying Pincushion Games’ Mystical Marketplaces-series clocks in at 15 pages, 1 page front cover, 1 page SRD, 1 page editorial, 3/4 of a page blank, leaving us with approximately 11 1/4 pages of content, so let’s take a look!

Einjhall’s is a lavish place for those with means -a purchase limit of 120 K and a base limit of 20K mean that the shop’s inventory, both mundane and magical, is geared towards the wealthy and discerning connoisseur. Situated in a two-story chateau, manservants bringing warmed meads and sweet treats, the place has an air of opulence and decadence, with richly carved mahagony pillars hold stone pillars atop merchandise smelling of silk and saffron.

As such, this place is a thankful purveyor of ettercap silk, blink dog hide,d ragon’s teeth and similar rare objects – the distinguished pair of owners Einjhall Alpinsonne (the last name meaning, just fyi, Alp’s sun and literally also denotes a lesser known mirage-like phenomenon; and I butchered the name to “Einhjall” every time I wrote it…) and Ophan are certainly gentlemen of wealth and taste.

Yes, this reference was intentional, for the two not only sell decadent trinkets toward the fops and dandys and dandysettes- they also have a second, lesser known specialty. Before we come to that, though, I should mention that both the patronage point system introduced in the first installment and the bartering system make a return here.

The shop does feature an array of sample magic items that usually are available in the shop, but the place is by no means restricted to offering just that; in fact, returning customers can not only enjoy meals on the house, they may actually custom order items or gain spellcasting services: The two owners have found a way to make glamours permanent, with sample prices for several given as a means of orientation. Being clothiers at heart, the two aren’t the perfect choice for gaining the doom-slayer sword of utter destruction…but more subtle means? Oh yes.

The supplement features3 sample quests that include bidding for a live ettercap on the black market auctions, getting more wraith shawl from the barrows…pretty creative hooks here! Similarly, shop tasks for less risky ways to increase the patronage score can be found herein.

Just take heed when shopping at Einjhall’s – this place is very much a caveat emptor type of place, where those that are less scrupulous and know to ask (or just offend the owners) may purchase illicit and cursed items – which may or may not (depending on what the GM decides), be the reason this mob of dandys is causing trouble in the sample encounter. Generally, one could take that as an easy means of introducing the store and hinting at its nature of more than what it seems to be. The situation can be resolved via social skills and combat, with the nobles getting statblocks. Similarly, the owners receive a statblock (both share the same stats) and one glance should make clear that they are not to be trifled with. As far as encounters go that introduce a place, it certainly is a nice encounter that does its job well.

Conclusion:
Editing and formatting are top-notch, I noticed no significant glitches in the formal and rules-language – Jeff Harris did a good job here. Layout adheres to a full-color 1-column standard – apart from the blank space on the final page that could have been filled with slightly more text, I don’t have much to complain here. The pdf has a nice artwork of a dashing noble’s portrait as a sample for the request to be drawn by the owners as well as some neat stock pieces. The pdf comes fully bookmarked for your convenience.

Frank Gori, Richard Litzkow and Taylor Hubbler’s Einjhall’s is a great second installment for the series: The place features unique benefits that make returning here a worthwhile proposition. The general hooks and presentation are fun, with the writing letting the place come to life…though only in a general sense. The framework is here, but if you require a room by room breakdown or want to know the precise merchandise and architecture, that the pdf will not deliver, being map-less and mostly focused on the concept of the store. That being said, since the store is less focused on individual “hotspots” than its predecessor and more on the general experience of shopping here, the lack of a map does not hurt Einjhall’s – smart decision here!

While most would associate the kind-of Scandinavian-sounding name with a more rough and tumble place, playing against the trope here works to the pdf’s advantage; similarly, the edge and duality of the shop as a leitmotif makes sense and is conveyed rather well via the interesting owners. If I have one complaint versus the content, then that would be the lack of guidance regarding the handling of the less savory items handled by the place – tying access to those via patronage would make sense. I *assume* that 10-point invitation to dinner with the two would be just that, but the pdf does not explicitly state this. In short – Einjhall’s is a worthwhile and inexpensive purchase that makes for a fun and interesting place of opulence and decadence that would be right at home within the bustling streets of Oppara or a similar metropolis.

At the same time, I believe that this pdf does sell itself short a bit: Take the hooks, for example: Why not go for unique, dyed ettercap silk cat-burglar suits? What does one of these nifty wraith shawls do? The ideas here are so cool, I really wished they had also been translated to full magic item/material status! I am, however, complaining at a high level here – this one is imho better than the first installment in the series, mostly due to focusing on the overall experience rather than the individual interaction hotspots. My final verdict will clock in at 4.5 stars, still rounded down for now – but if the series keeps this up, the next installment may make the 5!

You can get this cool shop here on OBS!