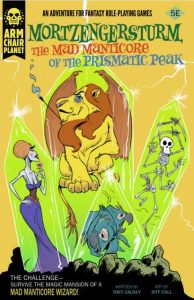 This module clocks in at 38 pages, 1 page page front cover, 1 page editorial, 1 page back cover, leaving us with 35 pages of content, so let’s take a look

So, did the cover remind you of old Tex Avery cartoons or old-school loony toons that were fun and not necessarily politically correct? Well, then you’ve nailed the aesthetics of this adventure. The art by Jeff Call is nigh perfect for the novel and interesting take herein that consciously draws upon quite a few nostalgic components – Mortzengersturm does look a bit like a lion king-usurper planning on establishing a 1000-year reich of hyena. (As an aside – the Icelandic version of “Be prepared” does indeed quote a 1000-year reich, so I’m not drawing this comparison out of my own behind.)

The prismatic peak mentioned in the title is btw. a n oblique, massive prism, with the fortress on top. Nominally intended for 3rd level characters, the adventure is on the easier side, provided the PCs don’t try to murder-hobo everything. The module can result in PCs dying, but as a whole, it is not too tough.

Beyond being often genuinely FUNNY and quirky, the module does another aspect of module design that we only rarely get to see – it presents a pretty well-wrought linear railroad. This module is not about emergent gameplay, instead opting more for a type of fun ride. This is also enforced by Mortzengersturm providing basically a kind of guided tour that is represented as a kind of unique boardgame-like alternate map. I liked this as a notion.

Formally, the module sports a few instances of read-aloud text for singalong and to help the GM get an inkling of how Mortzengersturm acts, of his colossal ego, but as a whole, the module requires that the Gm conveys the quirky and funny aspects of this adventure properly. The module has quite a lot of blank space available to the on each page, as it adheres to a one-column standard; however, the module uses this room wisely, providing short-hand abbreviated statblocks, brief dressing tables and the like. Much to my pleasant surprise, the module gets one thing right that many OSR publishers designing for 5e botch – the full and proper stats (for saves, etc.) are presented in the back of the module, providing the useful abbreviated stats where required in the module, while also sporting the full stats, should you require them. I like this. Considering this, it’s kinda puzzling that not all of the relevant stats are presented in their full array.

There is another aspect that the module gets formally right in a pretty nice manner, only to fall slightly short of excellence – that would pertain the 8 pregens. The pregens are conceptually awesome. There is an asterian (Jetson-like robot lady) monk; a frogling, a dwarf called “Minmaximus” (you see, dwarves are pretty feeble in the setting) etc. – all come with their own artworks and are genuinely cool. Features have their names bolded, but not italicized; spells are erroneously bolded; and worse, we don’t get proper ability scores, just the modifiers noted. The pregens are great for convention play and do their job for a oneshot, but considering how unique their angles are, I found myself somewhat dissatisfied by their rudimentary depiction. Reading that roguish archetype for a character would be player’s choice, but should be one that grants spellcasting also irked me – it defeats the purpose of pregens to, you know, think about how to build your PC. I did notice a couple of instances where the rules of the statblocks may or may not be correct, as with what’s here, it’s impossible to adequately reverse-engineer the material reliably.

It should be noted that the module does contain a brief sneak-peak of Yanth country, a unique region in the realms of Azurth. As noted before, this is a fun-house-like ride, and as such, the module makes no qualms about its primary hook, getting the Whim-Wham stone, being a pretense – alternative hooks are also provided, but ultimately, this module is all about meeting an oh-so-civilized and only slightly cannibalistic wizard-turned-manticore.

From here on out, the SPOILERS will reign. Potential players should jump ahead to the conclusion.

All right, only GMs around? Great, so the PCs ascend the peak via the surprisingly fast Snailevator. Parrot-faced hippogriffs and a patented evil-guy-screen guard the entrance, faced by sunflowers with unblinking eyes inside – eye-rises, one of Mortzengersturm’s creations. Goblin cooks and magical food ingredients/spices (such as slow thyme, which can, you know, slow targets…) may be found as well – the goblins being blue, as Mortzengersturm has modified their goblin smile vats. (As an aside – the artwork is just adorable, and goblins herein are played for laughs in a pretty cool way!) I mentioned that this is funny – and this extends to the hippogriffs: You see, at one point, the PCs can save a horse from being eaten by them, but said being is actually a dwarf polymorphed into horse form.

At the end of Mortzengersturm’s self-indulgent tour of his genius, of boasting and self-aggrandizement, he’ll inevitably attempt to dump the PCs in a pit where failed experiments await – the monsters faced here are actually menchanically-interesting. From the gruebird to a naga/clown-crossover (the Mocka), the module sports quite a lot of delightful monsters.

A boogeyman may be encountered, and there is a former Chantreuse, now washed up and turned vampire who may come originally from our world. And yeah, treating her with respect is a very smart idea . Did I mention the Spider from nowhere, who can only spell his words? Well, there are a ton of such creative NPCs herein. This is chock-full with great ideas and genuinely amusing and novel ideas, presenting a type of fantasy I haven’t seen before.

Editing and formatting are good on a formal and rules-language level – for the most part, the module does a good job regarding both, but it also sports a few instances where it blunders in the details. If you don’t mind minor hiccups, you’ll have no trouble using this module. Layout adheres to a 1-column b/w-standard, with the original artwork lending a great and unique visual style to the module. I can’t comment on the print version, as I do not own it. The pdf, in a totally jarring decision, lacks bookmarks, making navigation a pretty big pain. I strongly suggest printing this when running it.

Trey Causey’s first trip to Azurth is a module I’d love to recommend more unanimously that I ultimately can. I absolutely adore the Tex Avery/loony toons-angle regarding aesthetics, and this is a genuinely funny adventure with a unique villain that could come straight out of a classic cartoon. The unique monsters and cool locations are like a highlight reel, and from vaults to NPCs, this is brimming with passion and cool ideas – to the degree where the adventure actually makes a linear module work.

That being said, there are a few rough patches in the pregens, there are no player-friendly versions of the maps, and there are no bookmarks for the electronic version. All in all, these factors conspire to make it impossible for me to rate this as highly as I’d like to, and thus, I can’t go higher than 4 stars. However, for presenting a novel and indeed, inspired type of fantasy, this does get my seal of approval in spite of its shortcomings.

You can (if you’re lucky) get the adventure in print here!

If you enjoy what I’m doing, please consider supporting my patreon here or leaving a direct donation.