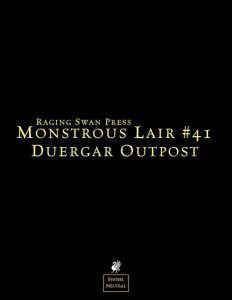 Okay, so, the outside of the lair features improved defensive positions on alternating sides of the corridor, accounting for the duergar’s low speed; hidden deadfalls, crossbow emplacements, guard posts with a large steel gong – this is generally a table with a couple of cool entries, though once more, we have slaves stumbling along booted tracks, and there is a bit of a strong focus on poisons, which struck me as slightly odd. As for what’s going on, we have duergar chasing wounded dwarves, we have duergar branding slaves, consulting elf-skin maps, etc. The table also includes duergar forcing slaves to pile rocks, and examples for their cruel and unrelenting obsession with duty – I liked these former entries; forcing two elven slaves to fight to the death? Less unique.

Among the major lair features, we can find mutilated dwarf corpses, braziers emitting light and smoke, stone statues lording with evil smiles over crushed adversaries, stalactites poised to collapse – several interesting ones, though there are two brazier entries, the second of which is cooler and renders the first pretty obsolete. Minor lair features include heavy stone blocks crashing down, hollow pebbles that break loudly, catapults firing oozes at intruders – oddly, these minor lair features are much cooler than the major ones – and more mechanically significant. Though a dead elf hanging from the wall? Not that interesting.

The different duergar appearances include bushy eyebrows poking forth from helmets, duergar growing to wield huge towershields with halflings strapped to the front, individuals with spike-hand prosthetics or priests wielding red-hot, fiery chains. I can get behind this table – it’s varied and interesting. The treasure section includes light-absorbing amulets, barbed whips made from roper tendrils and doppelgänger face-masks – grisly, and yet distinct from the decadence that was on display in the drow-entry. Nice! The miscellanea this time around includes empty vials of spider venom (kinda lame, duergar are not exactly the race that is known for their spider-theme), edible puffballs, spore-stained copper rings. The best entries here deal with well-crafted items that have subtle traps/caveats included – these are great, and I wished the whole table consisted of the like.

Duergar are harder to set apart than e.g. drow, but for the most part, Steve Hood’s pdf does a solid job; while not all tables are winners, each has a couple of entries that I considered to be genuinely interesting. As such, my final verdict will clock in at 4 stars.

You can get this inexpensive dressing file here on OBS!

Please consider leaving a donation or joining my patreon. Thank you.