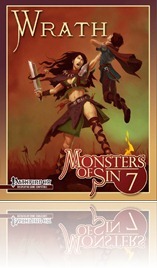 This pdf from Open Designis 11 pages long, 1 page front cover, 1 page editorial/ToC, 1 page SRD and 1 page back cover, leaving us with 7 pages of content, so let’s check out the final installment of the monsters of sin-series!

As is the tradition with the series by now, we kick off with an introduction to the sin at hand as well as the wrathful creature simple template (CR+3),which allows the creature to rage 1/day for 1d6+1 round as the spell and gain the diehard feat as well as reflexively rage when reduced to negative HP.

The new monsters are:

The pdf closes with a page on wrath-related fluff in the Midgard Setting.

Editing and formatting are top-notch, I didn’t notice any glitches. Layout adheres to the series’ beautiful two-column standard and this issue’s b/w-artworks are all rather well-made and iconic. The pdf has no bookmarks, which is a pity – apart from BP-length pdfs, all should have them by now.

The monsters of sin-series triumphs and falls with its brevity and unfortunately, this brevity also means that any creature that is not all killer, detracts from the issue’s appeal. And said thing unfortunately holds true for the Spiteful Spirit template, which at best is boring and something that most DMs probably pulled off without having the template. Furthermore, the template’s lack of any signature ability apart from its short-livedness is a wasted chance. The other creatures herein are stellar, though, with especially the embodiment’s increasing lethality something I’d wish more designers used for their boss beasties. Kudos for the neat design – though I wished the other embodiments had similar options. All in all, this issue is a fitting, albeit not perfect final installment of author Ryan Costello Jr.’s series and will clock in at a final verdict of 4 stars from me.

Through the Cotillion of Hours is available from: