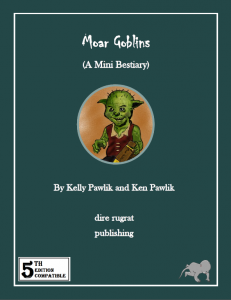 This mini-bestiary clocks in at 18 pages, 1 page front cover, 1 page editorial/ToC, 1 page SRD, 1 page advertisement, 1 page back cover, leaving us with 13 pages of content, so let’s take a look!

All right, first things first: The layout of this pdf has been streamlined and adheres to a two-column standard with color artworks, so that’s the first thing I did not necessarily expect. Secondly, we begin this pdf with a nice recap of the term goblin and the various things it meant over the course of the centuries and in various cultures – for that’s what this pdf basically does: It expands the concept of “goblin” and looks at different incarnations of the concept. Sounds intriguing, right?

Well, the interesting part here beyond the theme would be that the respective creatures all come with different and rather detailed notes on their background, nature and behavior – beyond what you would usually see in a 5e-bestiary, so that added flavor is something I personally welcome. The classic grindylow, for example, has adapted to water and may function for brief periods on land, but also is much harder to kill in water and is particularly adept at breaking wooden objects in water. Personally, I think it would have made sense to interact with the damage threshold mechanic here and the resistance to all mundane damage types while in water is potent for a challenge 1/2 creature (Why are magic attacks not exempt?), but these are aesthetic quibbles. Interesting: We get harpoons as weapons, with the mariner property introduced, which allows for non-penalized underwater attacks.

At challenge 1, the gudro bonga is unique and a piece of folklore I wasn’t familiar with – basically, these goblinoids are worshiped as somewhat divine in subtropical climes; they can disguise themselves as children and may pilfer items at short-range, even potentially stealing items fasted down due to their unique talent of temporarily making objects incorporeal. Pretty cool! Notes on a sample settlement of multiple of these tricksters can also be found here.

Speaking of obscure: The Kallikantzaros from Anatolian folklore should rank as one of the lesser known creatures: Vicious, gray-skinned and trapped on the plane of shadows, legend has it that these vile beings are seeking to destroy the world tree. Creepy, ritualistic inclusion in their doomed ranks makes for a fantastic adventure hook, with the means to prevent being found resonating with mythology. Challenge-wise, these guys btw. clock in at 5 and they can sense victims born during winter solstice…but they may be tricked: making them say “triple” or “three” sends them back to their horrid prison! Amazing!!

Nacht kabouter are chaotic creatures with, stat-wise, a sexual dimorphism – both males and females can stretch and squeeze through small holes, both wear red caps (no, not the blood-drenched ones) that can make them invisible (greater invisibility) and both risk turning to stone when subjected to sunlight, but females (at challenge 1 versus the male’s challenge 1/2) can cause nightmares. Anyway, as an aside, in Germany, there is the beloved child-icon Pumuckl, a cartoon/live-action crossover kabouter who is living with an old, kind carpenter called Meister Eder…so if you’re looking for a nice way to learn German, that may be worth checking out.

The pukwudgies would be up next and come with both a regular challenge 1 statblock and a challenge 4 shaman version. These goblinoids once sought understanding, but cultural misunderstandings and similar issues have not been kind to them, which led towards a shift towards more mischievous behavior. These folks can assume a porcupine-shape and burn with their touch. Touching these prickly fellows is also generally not the best of ideas…Shamans gain the ability to use a reaction to emit a spray of porcupine-like quills to debuff nearby foes.

Decidedly evil would be the final critter herein, the tokoloshe, Tiny humanoids that clock in at challenge 2: Snatchers of children that ostensibly can hear others wishing harm upon their fellow creatures. With snares (sample trap provided), notes on how to call them and a binding obligation to heed their summoner, these vile child snatcher that can render themselves invisible make for a dark angle of the fairy-tale creature…

Editing and formatting are very good, I noticed no significant issues. Layout adheres to a relatively printer-friendly two-column full-color standard and each creature herein receives its own full-color artwork, which is nice for such an inexpensive pdf. The pdf comes fully bookmarked for your convenience.

Kelly & Ken Pawlik have created a nice mini-bestiary worth checking out here: Beyond the basic builds, which all have at least one intriguing feature, it is undoubtedly the copious flavor and inspiring supplemental text that makes this pdf come into its own; it s also a big, big plus that this does not simply regurgitate the same tired creatures we have seen over x editions and instead opts to go for the uncommon and novel, drinking deep from the wellspring of more obscure myths and legends. In short: Totally worth the low asking price! An inspired mini-bestiary worth getting, full of evocative, nice ideas – only the classic grindylow feels like it falls a bit flat of its promise. My final verdict will clock in at 5 stars.

You can get this cool mini-module here on OBS!