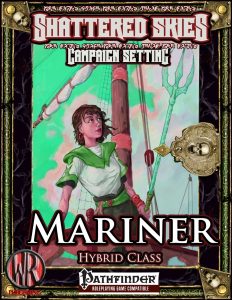 This hybrid class clocks in at 10 pages, 1 page front cover, 1 page editorial, 2 pages of SRD, 1 page back cover, leaving us with 5 pages, so let’s take a look!

The mariner as presented her gets d10 HD, 4 + Int skills per level and proficiency with simple and martial weapons as well as all armors and shields except tower shields. As a minor complaint: The header is not bolded here. The class gets a full BAB-progression as well as good Fort- and Ref-saves and begins play with +4 to Swim checks (untyped) that is increased to +6 when the mariner has 10 ranks in the skills. The mariner gets +1/2 class level (minimum 1) to Survival checks made to follow ships and aquatic creatures. The class also gains +1 to Bluff, Knowledge, Perception, Survival and Sense Motive checks and +1 to atk and damage, increasing by +1 at 5th level and every 5 levels thereafter. They may also make untrained Knowledge checks to identify marine creatures.

2nd level provides the net and trident style – basically a nice combat style, but the feats may only be used while in medium armor or less. 3rd level provides endurance as well as aquatic armor training, which is represented by the fighter’s armor training and being treated as class level +4 fighter levels for the purpose of armor training. A slight complaint here. The ability mentions the “normal swim speed” – but swim speed is a rules term of its own. It’s clear that it’s supposed to apply to the speed reduction inherent in wearing medium armor. Anyways, 4th level lets the mariner spend a move action to gain allies flanking with him or an ally +2 to atk; range here’s 30 feet. 4th level provides limited prepared spellcasting that goes up to 4th level, governed by Wis. Spells are drawn from the ranger list. 5th level provides weapon training, with every 4 levels after that adding another group.

At 7th level, the mariner gets a coastal variety of woodland stride as well as +4 to Swim checks. 8th level unlocks scent, 9th evasion, 16th level improved evasion. 12th level renders you immune to the detrimental effects of the depths of the ocean (like pressure etc.) as well as the option to hide in aquatic terrain sans cover or concealment. 17th level provides a kind of Hide in Plain Sight you may use in aquatic terrain and 19th level nets you DR 5/- when wearing armor or using a shield. As a capstone, the class gets Weapon Mastery, may move at full speed while using Survival to track underwater and make an attack as a standard action against an aquatic enemy (Does that refer to the subtype or the environment he’s in?) – on a hit, it’s save-or-die. Alternatively, there’s a nonlethal option. It can be used 5/day.

The pdf also contains 8 feats: Fast Folder lets you fold nets faster, Net Combat increase the DCs to escape your DCs and concentration to use it. Improved Net Combat provides quicker trailing rope control. Ocean Brawler lets you use a bludgeoning or slashing weapon sans penalty as long as you’re not off-balance. Sudden Brace lets you use an immediate action to brace 1/round. Wiggle Free nets you + 2 CMD versus a grapple by a net…which may be too specific. Finally, Underwater Shot helps using thrown and ranged missile weapons underwater – it’s still not perfect, but you can at least use them! The pdf ends with a quick note on tracking underwater.

Editing and formatting are solid; I noticed some minor editing/formatting hiccups, but nothing too serious. Layout adheres to a nice 2-column full-color standard. The pdf has no bookmarks, but needs none at this length. The pdf’s art is solid and full-color – one piece original, one I have seen before.

Robert Gresham’s mariner is pretty much what you’d expect – a coastal themed ranger with bits of fighter sprinkled in. It’s not brilliant or mega-creative, but a couple of the net-feats are pretty worthwhile and before you design the material yourself…well, you can get this. Personally, I think the class should probably grant swim speed at some point instead of piling ever more Swim-bonuses on it, but that’s an aesthetic gripe. It should be noted that this is a PWYW-book – and as such, it is definitely worth downloading the book and then, if you like what you see, leave a tip you consider appropriate. Personally, I’ll settle on a final verdict of 3.5 stars, and while I like it’s PWYW-nature, I can’t really round up.

You can get this class for PWYW here on OBS!
Endzeitgeist out.