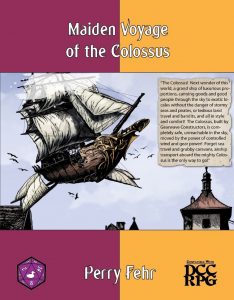 This module clocks in at 24 pages, 1 page front cover, 1 page SRD, leaving us with 22 pages of content, so let’s take a look!

First things first: This module was written for the Iron GM-contest (which is frickin’ amazing!) that basically makes GMing a competitive sport and it’s cool to see a module published based on this amazing event. Seriously, huge fan of it!

That being said, the module as presented here is dual format, for PFRPG and DCC, with PFRPG-material being denoted by purple headers, DCC material by black ones – the color-coding is a nice touch here.

All right, only GMs/Judges around? Good!

We begin with optional hidden agendas to assign to PCs, though these obviously hearken from the convention circuit: Sabotage is interesting, for example, but e.g. the need to gather proof of a traitor in the PC’s midst with the threat of assassins nearby feels weird: How can assassins be there all the time? The rationalization doesn’t make much sense here, but I digress. The city’s abuzz as the notorious Gearswave Inc. is about to launch the eponymous, gigantic airship, but their competition, Clock-Works, is supposedly determined to see the maiden voyage end in disaster. Via various offers, the PCs may choose different rewards for trying to save the maiden voyage. Smuggled into the colossus as covert operatives, the PCs leave the crate to find that they have 4 hours. The colossus is pretty interesting, featuring e.g. levitate-based parachutes. There is a bit of discrepancy to be found – e.g. forcing a lever has only DCC-rules, none for PFRPG.

The PCs will have to explore the airship, with the crew mostly drunk, handle tiefling saboteurs, oozes, undeed and e.g. sober up the pilot, who has a chance to ” fix any mechanical problem on the airship with 75% efficiency” – whatever that is supposed to mean. From decadent upper classes to weird gnomes, to the unique means of internal communication, handling the ship etc., the exploration of the ship is interesting, and the BBEG’s combat is also relatively neat. The pdf comes with stats for both PFRPG and DCC, a deity-write-up of Gearswave Inc. that has a nice spell to enhance/penalize Disable Device and a DCC-patron-iteration of Gearswave Inc. The pdf comes with full-color maps of the vessel, but no key-less player-friendly iteration is provided.

Editing and formatting are decent – I noticed a couple f formatting and editing hiccups, but nothing too grievous. Layout adheres to a two-column full-color standard, is printer-friendly and the pdf sports several full-color artworks. The cartography is nice, but hampered by the lack of player-friendly maps.

Perry Fehr’s Maiden Voyage has a couple of issues; DCC’s DCs are pretty high; the chance for success is smaller in DCC than in PFRPG. And this is where we have to discuss dual format modules. You see, it is my firm conviction that they unanimously are a bad, bad idea. From a customer point of view, you pay for one system you will not use.

There is a more galling problem here, though: Different systems have different math, different expectations of player and PC capability, etc. No matter how good your crunch design is, you ultimately will always stumble over something, unless you do a proper conversion, including modifications to plot etc. The example of flight would be pretty famous: Easily achieved in PFRPG at certain levels, much less common in other systems. More currently, 5e’s cool exhaustion mechanics translate less fluidly to other systems.

There are examples, when design has managed to cover wildly different systems, most famously perhaps EN Publishing’s legendary Zeitgeist AP. However, even that one basically cheats by modifying the ground rules of the world to nerf Pathfinder’s options and bring player capability in line with the options available for 4th edition characters. The only reason it got a pass from me is that it concisely presents these changes as a fundamental aspect of the rules governing the whole world. Similarly, Pelgrane Press’ Esoterrorists/Trail of Cthulhu/Fear Itself/Night’s Black Agents share a common rules-frame-work with different expansions/modifications and thus allow for a sequential progression/switching of systems, though one that takes serious work; still the general rules-frame-work is the same, the tones are similar, so in those cases, yes, it works. PFRPG and DCC do not have either capability- or tone-consistency.

Where am I going with this? Well, this may sound harsh, but the book is utterly delusional regarding its compatibility with DCC. I’m sorry to say it, but apart from DCC-rules being here, this pdf has NOTHING that even remotely pertains DCC’s aesthetics. DCC’s general assumption is that magic’s weird, uncontrollable and volatile; its whole premise is grittier, darker and the whole depiction is radically different, with the emphasis on patrons etc. On the other hand, Pathfinder features reliable magic and is geared significantly more towards high fantasy gameplay. At one point in the introduction, there is “A Note for DCC Players”, which reads as follows: “The Porphyra Campaign Setting is great for locating your DCC adventures, with its epic conflict of Gods and Elementals! Check out Lands of Porphyra and our other Porphyra game setting materials soon for lots of neutral-system game ideas today!” This is patently false. Porphyra is an amazing setting; I really, really like it. But it’s as high fantasy as they get. Several cultures and races that are present violate pretty much all relevant design aesthetics of DCC. The flavor is all wrong for gritty DCC gameplay and frankly, while some elements of the setting certainly can easily be used in DCC, the vast majority CAN’T. Or rather, shouldn’t be to avoid tonal whiplash. Porphyra is excellent high fantasy, but about as compatible to DCC’s tone as 4th edition’s modules were. I called this “delusional” for exactly this reason – there is nothing in tone, scope or…well…anything, really, that would gel, resound with DCC’s implied world(s), the manner in which the system’s rules govern the world, etc.

Which brings me to another aspect that hurt me in this module: As we’ve come to expect from Perry Fehr, this is a great, high-concept environment – there are a ton of cool, small ideas herein…but as a whole, the module felt static. The airship always remains just an evocative backdrop; there isn’t much happening in the environment category and the utter incompetence of all NPCs is galling. It may be a personal gripe, but I hate it when NPCs behave like the biggest idiots around and the story of this module, high-concept and evocative though its environments may be, made no sense to me. The ship is also very static – there isn’t much dynamics to be found, either regarding the ship, or its inhabitants, making the module, even if taken at face value, frankly lifeless and the weakest module I’ve read by Perry Fehr…and with some minor work, it could have been truly amazing, which renders this doubly painful.

So let me reiterate: This is NOT a DCC-module in anything but numbers provided; it does nothing to reconcile DCC’s aesthetics with the changed assumptions of this module and should be considered to be a disaster for the system, a 1-star offering. Alas, Pathfinder does not fare that much better – the internal flaws of the story and static behavior are baffling to me, particularly considering that Perry Fehr has created more dynamic environments in the past. I’d strongly suggest getting the cool Purple Mountain Dungeon modules for an example of what kind of awesomeness he *can* generate. This module, though, at the very best, can be considered to be a 2.5 stars offering, from which I’d round down. My final verdict will take both into account and thus clock in at 1.5 stars, rounded up due to in dubio pro reo and me enjoying the set-up/idea, if not much else.