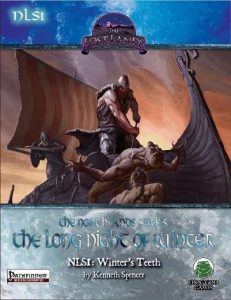 This module is intended for levels 6- 8 and is set in the eponymous Northlands of Frog God Games’ Lost Lands campaign setting. It does translate well to other fantasy campaign settings, though. Minus editorial etc., we are left with 13 pages here, just fyi.

All right, still here? Great! So, the PCs, on an epic binge, have inadvertently accepted the hospitality of Jarl Anbjorn Olefson, who has invited them to stay a couple of nights – thus the PCs have sailed towards the isolated homestead of the jarl into the bay that holds his meager holdings. It should be noted that the read-aloud text provided in this module manages to perfectly encapsulate the atmosphere of the North – as does the text. It’s small things, really, but an easily decipherable kenning here and there really helps drive home the flavor.

Now, if you expected an intrigue/standard module, then you’d be wrong – in fact, this module would perfectly work in our very own world when used e.g. with LotFP or similar old-school rules. Why? Because, in a nut-shell, this module is viking survival horror.

…see, if I had read that in a review, I would have clicked “buy” so fast, my keyboard would be smoldering. Want to know more? All right, all right…So, remember in my review of the Player’s Guide, where I commented on the fact that the guide explained the realities of life pretty well? The settlement of the jarl once exemplified this reality – very rural, secluded, with a couple of farms…and now all is ruins. Trails of gruesome carnage can be found as the PCs investigate the jarl’s holdings and surrounding area: Signs of cowardice can be unearthed and the gruesome massacre and hints about the nature of the doom that befell his lands are slowly, but surely unearthed as the PCs gather the survivors, all of which come with detailed information and background regarding the attacks.

You see, the jarl’s bearsarker has succumbed to the dread curse of the slåtten, consumed by the power that granted him his strength – now, an inhuman monstrosity bent on total destruction of the survivors, only a precious few have managed to survive – but e.g. a small girl may once, so wyrd wills it, become a fearsome champion…provided the PCs can defeat the monstrosity. In order to do so, they’ll be hard-pressed: Even an optimized group will, provided the 15-pt-buy suggestion of northlands is heeded, will need the added strength and help the NPC-survivors can provide. Furthermore, careful observation may clue the PCs in on crucial weaknesses of the monster they can exploit to even the playing field – from a specific moss to a certain…respect towards specific beings, these angles can provided the crucial help they’ll need…for the monster clocks in at a mighty CR 12! (And yes, this may well entail making friends with yetis that have suffered at teh hands of the monster!)

(And no, I am not spoiling what those are – suffice to say, this module runs pretty much like how I tend to write such scenarios – it rewards brains over brawns and is lethal.)

I know, I know. I tend to gravitate towards complex modules with a lot of plots, stuff to do, detail, etc. I tend to like material that is on the high-complexity side of things. Kenneth Spencer’s “Winter’s Teeth” is pretty much the opposite – it is really, really simple. And it is GORGEOUS. The atmosphere the prose evokes is incredible; the execution of the per se simple plot is precise, to the point and amazing. Heck, you could run this in LotFP, dark ages CoC or similar environments and it’d still work. This is very much an “atomic” scenario in that it highlights that you don’t need something structurally fancy all the time – all you need is a sharp pen, a gift for story-telling and there you go. In spite of my own preferences, I found myself completely engrossed in this module; in spite of it mirroring pretty much my own adventure-crafting style on a base level, I found myself incapable of putting it away. Its writing is simply that good.

Oh, and it plays better than it reads, at least if your PCs are smart. If not…well, then start prepping those obituaries… In short: Winter’s Teeth is a superb example of what you can do with a small module. It is inspired, evocative and well worth a final verdict of 5 stars + seal of approval.

Prefer old-school? The OSR (S&W) version can be found here!
Endzeitgeist out.