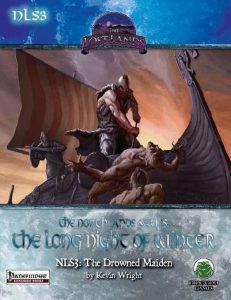 This module is intended for levels 9- 11 and is set in the eponymous Northlands of Frog God Games’ Lost Lands campaign setting. It does translate well to other fantasy campaign settings, though.

There are multiple ways to immortality – founding a great family; becoming a legend, being carried off on the wings of the valkyries to Valhalla – but there is one more way: To be chosen as the progenitor of deific offspring. This module’s premise is hence that one of the PCs is approached by a naked lady, clad in only algae and sodden hair and her alfar asrai attendants – and the druidess by the name of Ethlass does bear intriguing news for a PCs of known bravery and renown: One PC has bee chosen as betrothed by a daughter of the goddess Rán and the Jötnar Ægir – none other than Kólga, most beautiful of the deity’s offspring. As a sign of the deity’s favor, the PC will gain a magical mask denoting him as a suitor and also the legendary face of Kólga, a mask that should make the PC rather inclined to seek out Ethlass’ home.

Which is a perfect example of evocative fantasy – a castle of sand that can only be found by the chosen, as the waves forever destroy it with each swelling of the tides, so do legions of crabs reassemble it in a continuous struggle versus the elements. Once the PCs have arrived there, however, they’ll probably be…well, surprised. You see, Ethlass has forgotten to mention that the PC in question is not the only suitor. Beyond the PCs, nasty Jarl Unnr and his men have arrived and his boisterous posturing may actually work as a delayed Intimidate – while this is not a standard use of the rules, it makes sense in the social context here – same goes for the Bluffs and Charms attempted by the over-ambitious witch-mother of a less than enthusiastic skald. Oh, and then there are the Bors Brothers, werebears in cognito…and a powerful, lanky giant-blooded ranger with his stone-giant entourage. After the PCs have interacted with these folks and generated alliances or become wary of some of these beings, things take a turn for the worse as Ethlass announces that only the worthy will proceed to the next step – and violence in a nasty free for all ensues, with the exact parameters depending on the PC’s actions.

The witch may or may not escape to haunt the PCs later and the same goes for the skald and jarl – but ultimately, we have to hope that the PCs prevail: If they do, Ethlass reveals a rite that provides the aquatic subtype for a limited amount of time – and the Drowned Maiden’s Pearl will guide the victorious PCs toward sunken Hjallos – once rewarded by Rán for its devotion by being sunk beneath the waves. It is on the way to this legendary place that the Jarl and survivors may make their final bid to defeat the PCs…but sooner or later, they will have to venture beneath the waves, where a single drop of blood may attract sharks…

En route, the PCs may find the carcass of a gigantic narwhal, punctured by deep coral, a powerful new material introduced here…and brykolokas guarding the place. Indeed, it seems like jealous forces are at work, as sunken Hjallos is further guarded by Deep One Godshuscarls and lethal eyes of the deep, which must be fought in a gigantic sanctum of Rán, as they guard the crystalline coral that houses Kólga.

When the deity finally arrives, her face is breath-taking…as are the others, for the somewhat scatterbrained deity has failed to assume a form more pleasing to puny mortals – so let’s hope the PCs can manage to stall tactfully while regaining their composure in the face of something rather uncanny and alien…before the chosen one can be…coerced/persuaded to fulfill his duty, however, the festivities are interrupted by a rather lethal enemy. Turns out that the narwhale carcass was in fact a narwight, undead member of a highly intelligent and long gone race of sentient creatures – previously staked with deep coral. And yes, the module has multiple justifications for the whale to attack. In the furious battle, the roe of Kólga is destroyed, but in “only 100 years” it’ll be her time again! And the decidedly alien goddess will be gone – but depending on how the PCs managed their interaction with her, they may have gained a supernatural edge or bane when traveling the oceans wide…though one that may well elicit shudders from the erstwhile chosen…

It should be noted that the narwight-rules provides are pretty cool and flavorful and that the creature’s artwork is phenomenal.

Kevin Wright’s “The Drowned Maiden” is a weird one: Theme-wise, it is situated somewhere between a myth from the North and a fairy tale for adults à la Hans-Christian Andersen. The atmosphere, let me make that abundantly clear, is amazing: This module conjures truly fantastic vistas forth from the mind’s eye and the selection of adversaries and locales are evocative and phenomenal. That being said, I do have two minor issues with the module: Number 1 would be that, apart from the cast of suitors, the Northlands-theme is a bit subdued here, but that’s mostly aesthetic. The second one would be a bit more important: We have this amazing second with first the potential of ship-combat and the half under the waves and both primarily use their set-ups as a backdrop: The ship-sequence could have used a tactical map and the underwater combats are very much reliant of the GM to make them shine in 3d-glory – I’d strongly suggest using Alluria Publishing’s Cerulean Seas-rules for streams, movement, etc. there. In the hands of a good GM, this can be amazing and it still may be if the players are blown away by the great foe, hilarious reveal and glorious environment – but similarly, this aspect may fall slightly short of what it could have offered in that component. Hence, my final verdict can’t go higher than 4.5 stars – if you’re confident working a bit with additional rules, then this module can deliver in spades!

You can get this inspiring, if a bit brief for its ambitions, module here on OBS!

Prefer old-school? You can get the S&W OSR-version here on OBS!