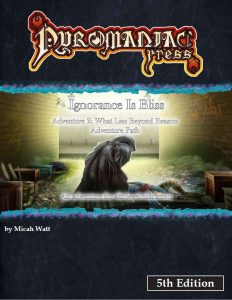 The second part of the What Lies Beyond Reason AP clocks in at 59 pages, 1 page front cover, 1 page editorial, 1 page KS-thanks, 1 page ToC, 1 page SRD, 1 page back cover, leaving us with 53 pages of content, so let’s take a look!

Ultimately, the trail puts the PCs on the trail of the strange drug “Bliss” (stats are provided…and they note an “alchemical penalty – which is a bit odd to my sensibilities and getting through withdrawal is pretty easy…) – and from here on out, the PCs may find addicts being drained by strange creatures – a chase ensues and the PCs get a chance to kill the creature…but who sent it? The being, none too smart, may spill the beans and it may partially lead to a curiously absent Luther Mendel of the Botanical Society (more on that in the optional module “The Gourd“, contained in the Campaign Guide) – but in the end, the trail leads to Damian, the kind alchemist the PCs met at the end of the prologue…which is a bit odd. After all, he didn’t feel evil, right? Well, his dangerous apprentices and a whole tower rigged to explode may beg to differ…and the finale pits the PCs against Damian, while Triast, commander of the Seekers crashes the party…and worse, a gigantic tentacle monster attacks from below, making the finale a free-for-all with two very powerful NPCs…and while none wants to really kill the PCs, that can be a bit problematic, particularly considering that Damian *needs* to escape and will do so in a kind of cutscene. That…can be somewhat problematic. Speaking of which: The brooch that is somewhat problematic in its wording in PFRPG works better in the 5e-version.

Speaking of the conversion: The conversion by Ismael Alvarez actually fixes the damage type oversights in the PFRPG-version…and it deserves special applause for the fact that it codifies PFRPG’s alchemist abilities in a meaningful and concise manner in 5e for the NPCs featured herein. While not 100% perfect, it’s pretty close…so yeah, kudos indeed there – and since those are NPCoptions, it works! Even better: Guess what: The chase, represented in the amazing side-view of this one block of houses, with different height-levels etc. – it has been converted. Yes, this actually has chase-rules for 5e and an extensive explanation of how the process works!! Seriously, big kudos!

Editing is better in 5e than in the PFRPG-version – the damage types are concise, teh rules-language well-made. Formatting in statblocks once again does diverge a bit from standards – things that should be italicized aren’t, but apart from that, the pdf goes the extra mile here. Layout adheres to a 2-column full-color standard and is really, really nice. The copious amounts of full-color artwork make the module aesthetically-pleasing and the pdf comes with a second, more printer-friendly version. PURE AMAZING: The chase comes with a high-res side-view representation that you can slowly unveil AND the maps of the relevant places come with player-friendly versions as high-res jpgs – sans traps etc. BIG kudos there! The pdfs come fully bookmarked with nested bookmarks and the softcover is really nice, as always with Pyromaniac Press.

Micah Watt’s “Ignorance is Bliss” puts down the kiddie gloves. This investigation hints at the darker themes, makes the sidetreks in the Campaign Guide viable further routes of inquiry and finally provides some freedom, offering a wide variety of angles to pursue and options to consider. I *really* like how “asking around” and the actions of the PCs influence the module’s outcome; I love the chase…but at the same time, from a plot perspective, I think that it would have made sense to feature the two antagonists in the final encounter in module #1 as well – if the PCs have not played the prologue, they will have NO relationship with the BB-Not-so-evil-G. That is a pretty significant potential stumbling stone. Similarly, after establishing the importance of travel options in adventure #1, I would have loved to see that matter a bit more, but that may be me.

You know what’s rather impressive? The conversion herein goes the extra mile in several cases and while it is not 100% perfect, the attention to detail and care is rather nice to see, impressive even! So yeah, for what it is, I do consider the 5e-version to be slightly better this time around, also thanks to Ismael Alvarez going the extra mile. That being said, unfortunately, I still can’t rate this the full five stars, which is why my final verdict will clock in at 4.5 stars, rounded down.