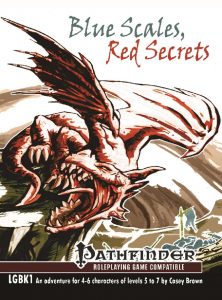 This module clocks in at 29 pages, 1 page front cover, 1 page editorial, 1 page SRD, 1 page back cover, leaving us with 25 pages of content, so let’s take a look!

This review was moved up in my review-queue due to me receiving a print copy of the book.

So, before we start, a little history: The Living Greyhawk campaign back in 3.X was a campaign I would very much have enjoyed playing in; I always liked Greyhawk’s relatively down to earth and classic tone. In particularly the region of the bandit kingdoms would have tickled my fancy, for the Bandit Kingdom summary-book I read really made its shades of gray mentality and pretty gritty feeling sound like something I’d appreciate. Alas, the general public doesn’t have a way to play these modules now – they’re lost…or rather, they had been lost. You see, this module would be the conversion of one such module to PFRPG, with the serial numbers filed off, if you want. I sincerely hope that we’ll get to see more of the bandit kingdoms…but does the module hold up?

The module is designed for a party of APL 6, with characters ranging from levels 4 – 7, but also contains notes on how to increase the challenge posed by this module up to APL 8. A handout and maps for the combat-encounters have been provided – the maps are in color in the pdf, b/w in the print version.

It should be noted that the bandit kingdoms are slightly darker in tone than standard fantasy and feature slightly more explicit themes. While still firmly PG 13, squeamish players and kids may require a slight alteration of some text – though, big kudos, the pdf does note such instances! Kudos!

All right, only GMs around? Great! The pdf assumes that the PCs are accompanying a man named Yulkin on an errand, acting as guards of sorts. The module features copious read-aloud texts, including some local color that ties into the Riverton-backdrop, but that as an aside. The way taken skirts the so-called Scar – the domain of none other than Morginstaler, the mighty red dragon. The terrain and environments provided for the areas, for the landscape, etc. btw. has mechanically-relevant repercussions – the lack of plant-life, for example, makes certain spells not work. The fact that the pdf mentions tidbits like this should be taken as testament to the attention to detail exhibited here.

Speaking of detail – this attention to detail also extends to the first encounter. Where Morginstaler swoops down and threatens to eat the PCs and their charge, unless they provide a bit of a service for him: A weird group of kobolds has intruded upon is domain and he is a bit perplexed – the kobolds did not grovel or run in panic and hence, he wants some intel on them. Best of all, he’ll graciously not kill them all. The interaction with Morginstaler sports A LOT of troubleshooting, read-aloud text, etc. – and yes, Morginstaler is a bit of a Casanova, so charismatic female PCs may actually start a romance with the dragon. He’s quite a charmer and, player-consent provided (the pdf notes this in bold all-caps!), the lady may actually become pregnant…though, if you consider these topics icky, you can simply ignore them – it’s just one of the possibilities. The potential issues paladins may face here are similarly touched upon.

Ultimately, the group will probably consent to the dragon’s request and thus travel into the badlands of the Scar – only to feel watchful eyes upon them…the PCs don’t know yet, but dusk kamadans are stalking them right now -and yes, there are full stats for these monsters, which bring me to one thing I honestly LOVE about this pdf. The stats of both NPCs and monsters herein are lavishly-detailed and hand-crafted, using creative templates, 3pp-classes and even some unique tricks – like a scaling Spell Mastery variant and a feat for move action spellcasting. The latter represents one of the few issues I have herein: It is included for the sake of the build of the NPC the PCs meet in the Scar, the Indiana Jones-like archaeologist/wizard Mumford Ravine, who, with his griffon-figurine and ties to some of the local humanoids, can provide some advice and social interaction for the PCs. While the feat works in context with his stats, I’d strongly suggest never allowing it anywhere close to PCs.

The encounter with Mumford, just fyi, also offers the chance to trade spells – told you, this was detailed! Oh, and once the dusk kamadans do strike, the pdf mentions how their pelts can be used for magic item creation! Yes, this is exhaustive regarding the GM-guidance and details provided and I mean that as a compliment!

Sooner or later, the PCs will find the location where Morginstaler has slaughtered the irreverent kobolds – only that since then, slime crawlers have begun taking a shine to the delicious corpses…oh, and there is an optional complication in the guise of a VERY potent kobold magister who survived the massacre – once again, a potent and custom-made threat. It should, at this point, come as no surprise that speaking with the dead and similar options of information gathering are covered. The PCs can find a prayer to the new “deity” of the kobolds here…ostensibly, a powerful blue dragon…oh, and they can find out that there are many, many more kobolds. Whether or not they try to discern the location of the massive kobold settlement, the PCs should have some information for Morginstaler….who has amused himself in the meantime by playing with Yulkin…who hence lies unconscious at the dragon’s feet.

The interrogation of the returned PCs once again sports serious detail…and once the dragon knows enough, he’ll “reward” the PCs – by slamming his tail on the floor to call forth basically his half-draconic umberhulk children. Since umberhulks are closed IP, the book has instead used ankhegs with multiple templates to retain the abilities and flavor – big kudos!

The showdown, while Morginstaler laughs, seems like a cruel game of cat and mouse – after all, the mighty dragon could kill them any time…but sooner or later, he will have to retreat – in his absence, Mumford has triggered a hoard defense of the dragon, calling him back to his cherished treasure…and thus allowing the PCs to hopefully escape with their lives. (And yes, the module even accounts for how Morginstaler evades the confusing gaze of these critters…)

The pdf concludes with possible XP awards and boons the PCs may have achieved during this module.

Editing and formatting are excellent, I noticed no glitches. Layout adheres to a no-frills two-column standard with thematically-fitting b/w interior artworks taken from the public domain. The pdf comes fully bookmarked for your convenience. The softcover is a nice one to have – being old-school, I prefer that version. Cartography is decent and player-friendly, though I certainly wished we got blown-up versions of the battlemap-style maps to print out at the proper size.

Casey Brown’s little module is much better than I can probably convey here. You see, I’ve read and run my fair share of organized play modules; more often than not, they boil down to a lot of fights and a flimsy story without much roleplaying involved. This, while similar in scope due to its heritage, is not such a module. While there is plenty of challenging combat to be had, against utterly unique threats no less, the star of this module is frickin’ Morginstaler. For the first time in a long, long, LONG while, the depiction of a dragon in a module actually nails what dragons should be, at least to me: Arrogant, smart, capricious and incredibly dangerous. This module NAILS how a dragon works and doesn’t treat him as a throw-away encounter. The amazing final battle is another big plus. The attention to detail provided is a sheer joy to behold – from mechanically-relevant terrain to atmosphere, read-aloud text and more, this leaves nothing to be desired.

My only two complaints with this glorious module are that I would have really liked to see high-res versions of the maps for printing/VTT and the one feat used in an NPC build, which should seriously never fall into player hands. Apart from these two minor hiccups, the module delivers by the buckets and makes for an amazing experience, well worth of a final verdict of 5 stars, just short of my seal. If you enjoy Greyhawk or want to see a dragon done right…or if you just some actually well-made, complex statblocks, then take a look at this little gem, for it’s well worth checking out!

You can get this captivating and fun module here on OBS!