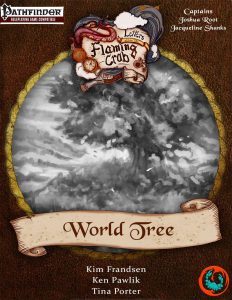 This installment of the impressive “Letters from the Flaming Crab”-series clocks in at 29 pages, 1 page front cover, 1 page editorial, 2 pages of SRD, leaving us with 25 pages of content, so let’s take a look!

So, before you’re asking – this is not a straight rehash of the classic idea of the world tree as known from Norse myths and the like; instead, we have a contextualization of the idea within the reality of the game. Touched by the dryad Endainne, the oak that was to grow into the colossal tree featured herein would grow, however, to proportions only dwarfed by the cosmic tree of said myths – at over 6000 feet height, this titanic environment contains wonder galore – and it obviously influences the environment, which is why we discuss the effects on forest, roots and the area around the branches. Climate and traveling are covered in similar ways and the bounty of the tree also allows for better use of local produce when used in conjunction with culinary magic. (Here is the Letter on that topic…and if you like it, there currently is a KS running to create more! The link is here!)

The religion of Endainne, the dryad goddess, is properly depicted with 5 domains, 6 sub-domains, boons (Yep, Inner Sea Gods-compatible!) and we even cover tenets of the faith and sample servants of the deity – big kudos for going beyond the basics here! And yes, the boons and rules-language featured here are precise and leave nothing to be desired.

And this is where the pdf starts becoming REALLY interesting: An extremely detailed, one-page-spanning table of effects of the proximity of nearby offspring of the World Tree can be found: Excessive oxygen production, magic sustenance, clean air, strange lights…or all of them. The effects are cool and flavorful…and we go the extra mile, big time: Want the effects of such a tree on a settlement? The rules are included. Want to know the effects on the kingdom-building rules? Once again: Included for your convenience…and if you do not like the default flavor of the world tree (or want more diversity), a sidebar full of different, creative options has you covered!

Nestled in the boughs of the titanic world tree, there lies Portokali, a small, welcoming town which may require peace-bonds, but actually makes for a compelling place to visit, one supplemented with a rather impressive in-depth history and a nice side-view sketch of the way towards the settlement. Life in the settlement and a map of the uncommon locale can also be found here – while the settlement does come with a sketch-like map, that would be the one aspect where this aspect of the pdf falls a bit short of e.g. Raging Swan Press’ Village Backdrops-series – in short, we get an amazing, detailed and thoroughly unique settlement with adventuring potential galore and even interesting classes that make up part of the unique social structure.

The pdf offers more, namely a new player character race, the daphanie, daughters of the world tree, who gain +2 Dex and Wis, -2 Int, are humanoids with the fey subtype, have low-light vision, gain +2 to Survival in forested/jungle terrain (and -2 to track them in such an environment), +2 to saves versus poison, always know where North is and have +2 to Climb. They can also grow a vine out of their dominant hand as a move action and use it to retrieve and manipulate small objects and may be used as a primary natural attack that uses the stats of a whip. Cool race and not one that should result in any issues. Instead of the tracking-tricks, they can get 1/day entangle or at-will speak with plants. The climbing trick can be replaced with darkvision. Instead of poison resistance, they can get +1 natural armor. There are Small daphanie and the signature vine can be replaced with claws (proper damage and natural attack type – kudos!), wild empathy or gliding membranes. All in all, a cool race.

We btw. do get a nice age, height and weight table as well as favored class options for alchemist, bard, druid, cleric, hunter, kineticist, monk, ranger and rogue. No complaints here!

The pdf also features racial archetypes, the first of which would be the tree glider monk, who must have the gliding membrane (obviously) and adds Fly to the list of class skills. Big kudos: The descending flight rules-language at 1st level has this Batman-y flair sans options to cheese it, retaining the lock on unassisted personal flight at low levels. 3rd level and every 3 levels thereafter increase the gliding flying speed and 5th level unlocks, properly, the flying options, allowing for the gaining of altitude. While this archetype is very much a small and humble one, it does its job well. Kudos!

The Toxibloom alchemist grows a symbiotic, toxic plant (thankfully, the toxin cannot be sold) that can produce 1/2 class level doses…but the ability does not specify what action the poison-generation is, which is a bit unfortunate. It also does not replace another class feature – which may or may not be an oversight. Instead of the 12th level discovery, the archetype receives toxic blood – and yes, this has different stats and specifies how often it can be sued and the activation action. Instead of persistent mutagen, the archetype gains poisonous pollen (again, with new stats and proper activation action). The archetype also gains two unique discoveries – one for acorn bombs and one that grows a vine whip on the torso.

Mundane equipment-wise, we do get plant pigments and the pdf features 4 racial feats. Alas, one nets a boring skill-bonus and is pretty much the epitome of filler. Another allows for sustenance through sunlight (and slightly enhanced natural healing), the third one allows for full-speed Acrobatics while balancing and enhances your ability to climb and catch falling allies. The final feat grants you thorns that deal “lethal” damage – which does not exist. That probably should be piercing.

The pdf also features 3 magic items: The petal cloak helps moving through underbrush and Handling Animals. The Staff of the World Tree is a nice druid-y staff and endainne’s shield 1/day breath of life‘s you, which is pretty potent….not a fan here.

The pdf also contains a bestiary, with Endainne’s aspect at a massive CR 24 being first – she is brutal and the build is nice, but I wished that she had a couple of unique tricks. Gnasher, the CR 21 version of Níðhöggr, does that right, just fyi – the mighty dragon comes with a miasmic breath weapon and some nasty, unique tricks. The CR 2 Rattatoskir should also feel familiar for fans of Norse myths, though I have seen that concept done more interestingly. The CR 7 Hyeorai, stick-dolls that are immune to magic and can emit deadly sprays of splinters make for a cool critter. The aforementioned servants of Endainne are also included: At CR 15, Mjarl the Strong represents the apex-version of the hyeorai, in gargantuan. The CR 9 Unkindness would be the legendary flock of ravens of the deity, including unluck-aura and eye-raking. A cliffnotes version of the respective critters and names is included and we conclude this pdf with 4 different random encounter tables for the regions of the world tree.

Editing and formatting are very good on a formal level; on a rules-language level, the pdf is still very good, but has a few hiccups. Layout adheres to Flaming Crab Games’ nice two-column full-color standard and the pdf comes fully bookmarked. Artwork-wise, we get a mix of nice b/w-sketches and full-color versions of public domain art. The frame narrative of the Flaming Crab once again make this pdf pretty nice to read.

Kim Frandsen, Ken Pawlik and Tina Porter have done a nice job in this installment of the Letters-series: The environments presented are truly evocative and the pdf does go the extra mile in several crucial instances. The attention to detail is really cool and the settlements and twists on the familiar tropes render this pdf a fun, cool offering that has something for everyone. While not all aspects of the pdf are perfect, we do have a rather cool and evocative file on our hands here. In the end, my final verdict will hence clock in at 4.5 stars, rounded up to 5 due to in dubio pro reo.

You can get this evocative, cool pdf here on OBS!