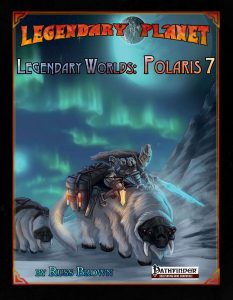 Orbiting a red dwarf star, Polaris 7 is best described as an inhospitable, frozen ball of ice, and one wracked by massive polar vortices; to make things worse, making the equatorial zone the only region habitable by any stretch of the word. The atmosphere is thin and requires supplemental oxygen for most humanoids. Why would anyone be here? Well, the answer to that, as often, is big corp – namely Polaris Industries. As an aside – this is not the 7th planet of the system; it was the seventh choice for the operation that is responsible for the sparse habitation of non-natives. The corporation found a serious amount of Tritillium deposits on Polaris 7, which is a superconductor that allows for the creation of relatively compact power plants.

The focus on the rare resource Tritillium is also mirrored in the supplemental crunch provided herein: We get stats for Tritilium Batteries as codified technological items: They hold 20 charges, and may be depleted in increments of 5 when recharging items; they may be recharged as usual, but only have a 10% failure chance when doing so. Craft DCs and cost are sensible for these, which is impressive: Since batteries are pretty much a cornerstone of the Tech Guide subsystem, tinkering with it requires the utmost care. So yeah, neat. Oh, and we do get the information for Tritillium Power plants as well – full weight, generator yield, hardness, HP, explosion, etc. These are powerful, but at 800 lbs. indeed something you can render mobile. KUDOS! One of the two feats, Tritillium Prospector, is intended primarily for NPCs and requires that you’ve mined in a proper Tritillium mine for at least 3 months; it nets you +2 to 3 Knowledge checks pertaining to mining and working Tritillium, and 1/day nets you a reroll versus a Tritillium-based trap or hazard, which, while specific, does potentially come in handy and salvages the per se not too exciting skill-boost feat. Cold-Endurance, the second feat, is basically the cold twin to Volretz’ feat that inures you to cold conditions. Not exciting, but well-executed. (Since the feat does reference those, and some of my readers do care about this as much as I do: As usual, temperatures are only provided in °F; no °C alternative is provided.)

But we are getting ahead of ourselves. Prompted by the big corp Polaris Industries, the one city of the planet was constructed around the gate – and before you ask: Polaris City is a small city and gets a fully-realized settlement statblock, and one that actually has two different marketplace sections, with the better being exclusive to the corporate sector. And in case you were wondering: Polaris 7 is indeed a cold hellhole; have you played “The Outer Worlds” and marveled at the brutal late stage capitalism on full display in that game? Well, Polaris 7 came out earlier, but the corporate control over the life of the local populace is pretty much as brutal, including loans that are nigh impossible to pay back and indentured servitude running rampant. Attempts to formalize resistance and government, some sort of regulatory push, have so far been squashed by the corporation.

Polaris City is divided into 4 sectors, and comes fully mapped – somewhat to my chagrin, no player-friendly map is provided. All of the sectors are properly touched upon, and from there, we move on to the 8 (!!) factions that make up Polaris 7’s complex political landscape: We have the corporate overlords of Polaris Industries…but much to my pleasant surprise, this supplement does not dive into easy dichotomies and simplifications of corp=evil, union=good – no, this is a mature take on the complex subject matter…and the Miner’s Union may just be a tad bit worse than Polaris Industries! Good resistance fighters without a grand plan and a bad reputation, toothless, but good coalitions attempting to form a government, crime syndicates…and did I mention the raiders, or the fact that wolliped ranchers have a co-op? It’s genuinely been a while since I saw a per se classic set-up of factions and clashing ideologies has been executed this well, without jamming “x good, y bad” down our throats. While clear alignment notes are provided, the writing is nuanced enough to make clear-cut, simple solutions not feasible. Huge kudos for that.

While we’re on the subject of wollipeds – one of the new items, the wolliped wool tunic is pretty straight-forward, in that it protects against the elements, and even cold – the interesting aspect here is that is occupies the chest slot, and accounts for that in pricing. No complaints. The second item, the avalanche stone, makes an incredible amount of sense: It’s a stone that you activate, which’ll then use a modified dimension door to get you out of it…and if you are encased in ice and snow, unable to use it, it also goes off. I really like the narrative potential of this one-use item. It’s something I’d develop if stationed on an ice planet and capable of weaving magic. Nice! The pdf also contains a new spell, flash freeze, available at 2nd level for bard, sorc/wiz and witch, which is a multi-target spell that deals nonlethal and cold damage and fatigues the targets; it is per se pretty potent, particularly considering the number of targets affected, but its save does negate the nonlethal damage and fatigue. It’s a powerful spell, but not one that’ll break most sword and planet games. As a minor nitpick: Making it require indigo powder as a material component would have been an easy way to hand the GM a limiter, if desired.

What’s indigo powder? Well, it’s used to make addictive pharmaceutical Surge, which affects androids, auttaine and other characters with a significant amount of cybertech implants, making them awake and more attentive and quicker to act. However, well, it’s obviously addictive and comes with the cost of 1 Constitution and 1d4 Wisdom damage. It is a good type of pharmaceutical, in that it has a pronounced cost that makes abuse a bad idea, but it also has a sufficient bonus that means you’ll be tempted to use it. It’s also dirt-cheap and made from indigo powder, a waste-product of the process of refining Trillium, which allows GMs to potentially easily limit availability with in-game logic. The latter may seem like a small thing to you, but it really matters to me and quite a few of my readers.

Speaking of nice: The Prospector’s Basin that houses Polaris City is also mapped (alas, no player-friendly map included), and gives us overviews of the different mining sites…and their dangers. Dangers? Well, yeah, we do have a local creature that spells all kind of trouble: At CR 10 and lavishly-illustrated (not sure by whom: Simon Aan, William Henderson, Beatrice Pelagatti or Julio Rocha), the cryo-mantid is GLORIOUS: A Large mantis that shares both the cold and fire subtypes, with burning ichor and searing hot claws. And no, they are not remorhaz-like: With nasty SPs, ice-tunneling and scuttling, they feel like apex predators, and they do have an Achilles’ hell. In case you were wondering: OBVIOUSLY, the conflicting subtypes of the creature would usually contradict each other, but the vulnerability bestowed by each was changed to another energy type, while an additional weakness of similar strength was included, making the creature come out properly: The “rules value” of the subtypes was maintained. I btw. noticed no hiccups in the statblock. Great example of a critter that feels like an adapted, dangerous, magical beast.

As always in the series, we close the pdf with a series of 3 adventure hooks: All of these outline full sketches of adventures, and go beyond the usual “Go there, kill X” – I considered all of them interesting, particularly because they also provide alternate missions, in case you don’t like the primary one proposed.

Editing and formatting are very good on a formal level, and top-notch on a rules level; I noticed not a single instance where I could nitpick even a single rules-relevant component. Layout adheres to Legendary Planet’s two-column full-color standard, and the original full-color artworks are great. The cartography is solid, but remains my only true niggle here – player-friendly, key-less maps would have been nice…but then again, none of the maps contain even a single SPOILER, so I’m not penalizing the book for that. The pdf comes fully bookmarked for your convenience.

I expected to basically get the cold mirror-image of Volretz here, and I got something infinitely cooler, pun intended. If you read as many RPG-supplements as I do, you start to expect some things. One look at the cover, for example, made me go “Oh boy, second planet in a row (after Jowchit), and this one is cold, so it gets the obligatory magical aurora borealis that was creative and cool in Jowchit, but which is boring and expected for an ice-planet; the new creature statted will be a mostly harmless herd animal that was domesticated and gets some serious trampling and charging. It’ll also probably have cold elemental creatures analogue to Volretz.” The base premise “Evil mining operation”, on paper, also is not exactly novel, so I genuinely wasn’t that excited from the premise.

I am so happy when a book proves my first impression wrong in such a consistently delightful way. First of all, the writing: Russ Brown’s vision of Polaris 7 is clearly a homage to the tropes and genre, but the execution is what makes it shine: It is consistent, but never blunt; it knows its scope and focuses with a keen edge on it; it is nuanced and clever in its execution; in short, it is pretty much the antithesis to e.g. Carsis: It base premise may sound less exciting, but its execution, from the little narrative touches to the rules-relevant components, is absolutely fantastic. Polaris 7 is a great setting that can be taken as proof that the small details, the small touches that really show how much the author cares, can elevate a supplement, can mean all the difference. I genuinely love this planet. 5 stars + seal of approval.

You can get this amazing world here on OBS!

You can find the SFRPG-version here on OBS!

The 5e-version can be found here on OBS!