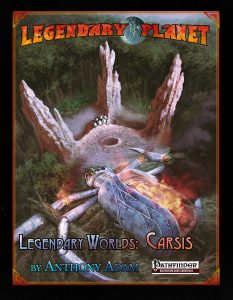 This installment of the Legendary Worlds-series clocks in at 22 pages, 1 page front cover, 1 page inside of front cover, 2 pages of SRD, 1 page editorial, 1 page ToC, 2 pages of introduction, 1 page advertisement, 1 page back cover, leaving us with 12 pages of content, so let’s take a look!

A little more than one and a half millennia ago, the world of Carsis was wrecked by a cataclysm, as the rogue moon now known as the Heart of Carsis crashed into the planet, shattering the world and sending the polar regions into space, forming new moons and changing the planet’s gravity; meanwhile, the moon became the new core of the planet, absorbed into its molten core. This Armageddon reset essentially all life on the planet’s remaining 5 landmasses, and only 800 years ago, life properly returned. The pyramidal landmasses sport life all around, the tips heated by the core as the surface area is heated by the sun; the former regular moon of the planet now orbits the equator. And yes, this is illustrated by a proper map/graph, which made me smile indeed – this is one damn cool concept!

And then, things become a bit weird, as the pdf begins flat out talking about the landmasses having a distinct flavor, embodying aspects such as anger, love, hate, envy, joy, compassion, cruelty, and so on, all without an in-game context or rationale. The descriptions of the major land masses spell e.g. out that a place “embodies the struggle for life, epitomizing rebirth.” Don’t spell that out. Make it obvious from subtext, not text. A planetary opera game does indeed have room for the, as some might construe, sappy notion of applying human feelings to evolution, but it requires some finesse. And that’s just not done particularly well here. Even Guardians of the Galaxy 2 was more subtle there. The notion is also is lore-wise really weird: The pdf, for example, talks about the landmass Kerkor, embodying death and destruction, as the place where “the restless spirits of the shattering and undead seeking a home away from the vibrancy of life” have taken shelter. Undead fleeing life, instead of consuming it. This is…odd. Particularly since none of the rules of the planet support it. If Carsis had positive energy planar traits, okay, but this? It’s a stretch regarding Pathfinder’s internal logic for undead – or that of Starfinder or 5e, for that matter.

This is particularly grating, as all of these concepts are per se fine; they just are not executed with any degree of narrative finesse: The planet also gets write-ups for its moons and core and the trail left by the passage of the Heart, and one of the fragmented components, Milone, has a chaotic magic environmental rule that can increase CL and DCs hidden in the flavor text. Cool, more of that, please, and less of that “the planet may or may not have been sentient” stuff sans set-up. We also learn about the spaceport in Akeelan, the landmass, to quote the pdf: “Akeelan has come to epitomize the order necessary to rebuild a world, exhibiting great beauty within an ordered society.” See what I mean? How can a landmass be that?

The dominant species are btw. four-armed mantis-people, the Carsians (CR 7), who get gliding abilities, lunging and may execute particularly swift attacks. As a nitpick: They do not have “paws” as natural attacks – which would render their Weapon Focus feat inoperable. That should be “Claw.” There are playable race stats: Carisians get +2 Dex and Int, -2 Wisdom, proficiency with all weapons (!!) and light armor (!), neither of which should be granted by the race, +1 natural armor that scales at 3rd level and every 2 levels thereafter, darkvision 60 ft., +2 racial bonus to Acrobatics, Stealth and Perception. They start play with the mandible special ability, which is missing both here and from their monster statblock as well, gaining Lunge at 5th, sudden strike at 7th and gliding lunge at 10th level. This race gets a plethora of abilities that they should not have; universal proficiency categories are a matter of class, not race. The missing mandible ability is weird. Dumb: The player-write-up is missing not only the mandible ability absent from the statblock, it is also missing the glide ability that the 10th level gliding lunge is predicated on. Not properly functional.

The pdf comes with 5 brief adventure hooks before presenting a sample-encounter/mini-sequence of encounters, the spawning of the Grizzat, intended for 4-6 6th-level PCs; the brief encounter-section does sport read-aloud text. The encounter is basically an introduction to the Grizzat monsters, with some read-aloud text provided, but no maps. The Grizzat comes as a CR 3 threat that sports wounding attacks, but offer no other remarkable features; I am also pretty sure that there are errors in the statblock. The pdf also includes a swarm version, the CR 5 Grizzat swarm, which is per se decent, but also has a snafu in the stats.

Editing and formatting are very good on a formal level; on a rules-language level, the pdf is significantly less consistent than what we’ve come to expect from Legendary Games, and sports some serious issues in power-level and functionality. Layout adheres to the two-column full-color standard of Legendary Planet-supplements, and the pdf comes with several really cool full-color artworks. The pdf comes fully bookmarked for your convenience.

Carsis started off so cool for me: Anthony Adam begins this supplement by painting this fantastic concept of a world, where directional gravity, a recent cataclysm and the like practically demand for void-jumping, for hazards representing highly volatile evolution, for isolated eco-systems with specialized tasks! Carsis could have done pretty much everything with this amazing set-up… it is easily the strongest in the series so far. Let me make that abundantly clear: I LOVED this to bits. The author does have talent.

But what do we actually get based on that premise? Oh boy. So, we have essentially Thri-kreen with gliding wings as dominant species, with errors in stats and overpowered racial traits. Not new, but okay. However, the insect theme for a cataclysm-wracked world is somewhat unfortunate, as it results in direct comparisons with Kyoudai Games’ Thunderscape-setting Aden and the Darkfall, which is, by mere scope, automatically better off. The primary difference to Thunderscape, apart from the planet’s unique shape, would be the theme of emotions assigned to landmasses. In case you haven’t notice, I absolutely despise how this was executed.

This theme could have worked: Heck, Pathfinder has a whole magic type associated with emotions and concepts like the anima mundi, but the planet never establishes a proper mysticism, an occult lore, regarding its emotional themes. As a result of the absence of any reason, simply ascribing emotions to landmasses and evolution comes off as sappy and hackneyed at best; at worst, it contradicts how the concepts, on a metaphysical level, usually operate in Pathfinder. For me, a big part of the pdf was rather painful to read as a result, as I witnessed a great concept executed in such an underwhelming manner, furthermore severely tarnishing a set-up that had me already draw my seal from my virtual pocket.

The introductory paragraph and unique shape of the planet blinded me. Know what does this “country behaves as subworld/has a strong theme” patchwork-angle infinitely better? With special rules for lands, a reason for their differences, etc., and has a similar concept, minus planet shape? Purple Duck Games’ exciting Porphyra-setting.

Try as I might, I can’t look at Carsis as anything but a waste of an exceedingly fine planet-concept; instead of developing something befitting of the unique planet structure, it is just a mesh of Porphyra and Aden, and neither encounter, nor the flawed statblock/racial trait integrity can make up for the conceptual shortcomings due to their own issues. This is the weakest installment of the series so far, by a long shot, and the only one I’d recommend skipping, at least as is. My final verdict can’t exceed 2.5 stars, rounded down.

You can get this pdf here.

My review is based on the PFRPG-iteration, but there are two more versions:

If you missed the awesome Porphyra-setting, you can check it out here!

If you missed the Aden setting, you can check it out here!