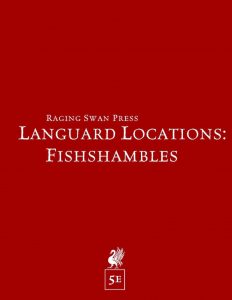 As in the previous installments, we have the respective key NPCs associated with locations within noted with alignment as well as suggested race/class combo and an inkling of the power they ought to have, but said NPC notes do not contain stats or the like. In 5e, they refer to the default NPC statblocks, wherever applicable. Each of the locations sports one or more different hooks for potential adventuring. Run aground slightly outside what is considered to be city proper, the Castoff’s Sanctuary sports folk with the haunted Gloamhold Look, watched over by father Uklo – this is the Castoff’s Sanctuary, and a selectively mute paladin and an ancient half-orc preacher tend to those traumatized and perhaps, broken. It s here that favors may earn even utterly coinless PCs some respite. Moss-covered and obscured by seaweed and shellfish, a wrinkled old mage with a penchant for the underwater world is peddling healing, narcotics and the like. (If you are up for a bit of conversion, you may want to check out Necrotic Gnome Production’s Wizardzine #1 – I got a vibe from this fellow that would make the spells from said supplement a natural fit…but I digress.) Did I mention coral zombies?

Beth Breitmaier, Dave Breitmaier, Rachel Cruz, Steve Hoodm John large, Stewart Moyer, Tyler Omichinski, Rob Smith – quite a few new names among this list of authors, but surprisingly, the locations presented within nonetheless manage to evoke a unified aesthetic that situates the fishshambles firmly as part of Languard, while managing to provide a distinct identity. In short, this is a great little dressing file. While poverty is certainly a leitmotif, the pdf manages to paint a picture that is not simply a series of hopeless causes – while this place is poor, it’s not necessarily depressing. That is perhaps what struck me most about this. In contrast to the shambles, this feels a bit more cosmopolitan, as befitting of the dockside. A bit rowdy, a bit dangerous, but a place of life, where darkness and light are sharply contrasted, and perhaps just one alley away. A highly recommended addition to Languard, my final verdict will clock in at 5 stars + seal of approval.

Missed the city backdrop? You can find it here!