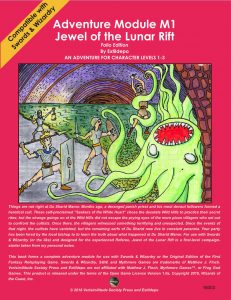 This module was penned for the Swords & Wizardry-rules, which means that we get ascending and descending AC, one save, standard movement of 9, morale, etc. HD are provided, and sometimes, but not always, we also get specific HP-values for the entities within. The module, unfortunately, does not consistently implement the formatting-conventions of Swords & Wizardry, and instead sometimes uses bolding to highlight e.g. entities and monsters in the massive text-blocks, but does so inconsistently. The dungeon does not sport a random monster table, and the module has no read-aloud text for rooms, but does spell dialogue out for you. Cool: For those using Option 2 combat rules, Dexterity scores are provided for enemies. Conversion to other OSR-games is pretty painless.

The adventure is intended for a group of level 1 – 3 characters, but no number is given; after testing this, I’d recommend 5-6 characters, which should be able to cover all roles of the traditional adventuring group. The module is relatively average regarding its difficulty-levels for an old-school adventure. You can very well die if you don’t take care, but it’s no meat-grinder and should not result in a TPK if tackled by an experienced group.

The adventure is set in the world of Messoria, which is at once the greatest strength, and greatest weakness of the adventure: The module starts in Mersey Town, which is fully mapped (alas, sans player-friendly, key-less version), and hints at several things I very much like: There is a rich lore underlying everything, though one that is not required and can be easily ignored, if so desired; there is a sense that non-divine magic is eyed with, at best, suspicion, while divine magic operates in its stigmatizing of others in a way reminiscent of Christianity. From titles featured like “Atar” for priests to other small tidbits, these details bring the place to life and make it feel like a setting on the verge of, or currently in the process of emergence from the traditional fantasy pseudo-medieval backdrop, which is also further emphasized by the presence of Du Sharid Manor. In a way, this reminded me a bit of a cross of old timey New England aesthetics and the traditional fantasy tropes, particularly due to another component of the story: The module’s rich mystic backdrop and underlying magical logic hinges in part on there being two moons that sometimes sport specific constellations. While you can ignore that aspect and run the module just fine, as you can ignore the aesthetics of the world, doing so deprives the module of a lot of its charm.

And this is as far as I can go without diving into serious SPOILERS. Potential players should jump ahead to the conclusion.

All right, only referees around? Great! So, it all began when Ol’ Ed Butterbot found a strange item entangled in the petrified roots of one old tree: The local priest Atar Lobe Du Sharid took the item off the man, and fascination grew with experimentation – the Atar and a few of his men had become a cult, one that would take their experiments to the Wild Hills, High Crescent Hill, to be precise. In spite of attempts at secrecy, small towns are as they have always been, and just as a mob with the traditional pitchfork and flame-implements was about to arrive at the cult’s site, aforementioned constellation of the twin moons happened, opening a rift and swallowing the cultists; a massive rift remained, and the cultists were presumed dead. Non-corrupted individuals were instated, but ever since, the villagers have been rather afraid of the area and the rift. Time to clear up that mess!

As you can see, this is pretty much traditional fantasy with a small dose of the weird and cosmicism strewn in, being generally something I enjoy. So, after some research in the relatively detailed town, it’s time to go down the rift, where the dungeon part happens…and the beginning of the dungeon is as lame as can be: We get a couple of goblins and some kinda-skeletons…though there are aspects here that rock: That strange thing on the cover? It’s a cave kraken, probably beyond the ability of the PCs to slay, and it is per slumbering; even if woken, it can be pushed back, and makes for the most interesting combat encounter. The most interesting social encounter happens upon subterranean shores, where the PCs may meet the Ants of Mixolodia. These ant-people come with a princess-egg, want to clear the goblins as well, and travelled here via natural diving bells generated by their lobotomized water spiders. This is pure awesome, and I want an adventure that takes place in the culture of those ants!

Since a massive goblin horde is approaching underground (noted in a throwaway line), making peace with the ants may be wise. Anyhow, it should also be noted that e.g. a pit trap’s placement makes sense. I also felt myself engrossed in the unearthed complex showing a variant history of the deeds of ostensibly noble people, but once more, the impact of all of that is lost when you strip the module of its flavor, and when the PCs and players are not familiar with these heroes and cultures. On the usability side of things, the hidden cultist base beneath the ancient catacombs unearthed suffers from its access, hidden by a secret door, not being noted by the actual text of the module. The second level, where it obviously turns out that the corrupted Atar is still alive and needs killing, is shorter and thoroughly unremarkable. It is not linear, I’ll give it that, but it’s one of the least interesting sub-levels I’ve seen in a dungeon in a while. The McGuffin, the White Heart, i.e. the artifact (sans precise powers) that opens those rifts, opens two more in the distant manor, which can lead to further adventures. Beyond the ant vs. goblin war. Beyond the conflict of orthodoxy vs. the information gleaned here below. Beyond the secret door that can only be opened via knock that leads to further adventures of the GM’s own devising.

And this is perhaps the worst thing about this: the entire module feels like a set-up of awesome things to come, but doesn’t itself deliver on them. It feels like one of those annoying teasers designed to make you get the full (and so much more awesome) product. Only that, well,a s per the writing of this review, none of these elaborations have materialized.

Editing and formatting are decent, if not impressive. Formatting does not consistently adheres to S&W-standard. I noticed a couple of typos, and the information-design adheres to the “wall of text”-aesthetic; prepare to use your highlighter and annotate the text, for you won’t find the prudent information on the fly while running this. Layout adheres to a two-column b/w-standard with no frills. The module does come with extensive bookmarks, which is a plus. We get a nice, hand-drawn map of the village, and regular maps for the dungeon complex. All maps are per se functional, but all of them lack a scale. No player-friendly versions are included, which is a comfort-detriment, particularly considering the number of secret doors.

Extildepo’s freshman offering is exceedingly frustrating for me as a reviewer, mainly because it tries to be an adventure, but doesn’t do a good job there. The whole appeal of the adventure, its entirety, did lie in the lore for me; Messoria looks like a truly exciting campaign setting, and I’d have loved to know more about its religions, cultures, social mores, etc. Similarly, I wanted to know more about the ants. The module, though? It’s unfortunately neither particularly interesting, nor especially well-executed. Crucial information like the presence of secret doors that are required to progress is omitted and requires consulting the map, just to make room for more lore.

The lore is good and neat. It sinks the adventure. In a way, the module made me think that the author wanted to write a gazetteer or setting supplement, and went for a module out of some inscrutable reason. The result, unfortunately, is not compelling. Worse, it’s obviously not due to a lack of ideas! The module is LITTERED with better ideas, in throwaway paragraphs, in hints of things to come; the novel creatures used are exciting – so why do we deal with boring, cookie-cutter goblins throughout? There are so many *hints* of cool things to come, and none materialize herein. In a way, for the better or for worse, this reminded me of the old serialized pulp/Weird Tales stories, in that it constantly makes you crave more. Alas, it also reminded me of Lost, in that the module opens a metric ton of plot-points, but doesn’t close any of them.

And then there’s the fact that the background story loses its occult underpinnings when used in another setting; and that the potentially setting-changing challenge to church orthodoxy falls flat on its face in another setting. Essentially, all really cool ideas herein fall flat if divorced from a setting we know next to nothing about. Combine that with the actual dungeon not being that exciting, and we unfortunately have a book I can’t recommend.

There is loads of potential here; I genuinely hope the author continues writing, for the things hinted at? I want to play those modules. Which is more than what I can say about this one; apart from the lore and Lost-like suggestion of awesome things to come, the module delivers a cookie-cutter adventuring experience that is neither particularly interesting, nor compelling. My final verdict can’t exceed 2.5 stars, rounded down.

If you consider my reviews to be helpful, please consider leaving a donation, or joining my patreon here!