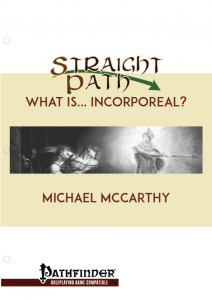 This little pdf clocks in at 5 pages, 1 page front cover, 1 page editorial/ToC, 1 page SRD, leaving us with 2 pages of content – at least for the print version. There is a tablet-version with a landscape layout that is a total of 9 pages long instead, but content-wise remains identical.

So, you don’t have to be a developer to notice that some components of Pathfinder’s rules are more clear than others; any GM will sooner or later bump into the roadblock of being incorporeality, and it is, historically, not one that grew over night. In fact, if you’re reading old-school supplements on a regular basis, you’ll notice that not having a body has been a somewhat wobbly state as far as rules are concerned for quite some time. This pdf seeks to shed some light on this rules-aspect and help you thus avoid needless grief.

The pdf first states one of the major sources of confusion: Being incorporeal does not equal being incorporeal: There is the subtype, the defensive quality and there is the condition. It should also be noted that there are a lot of individual exceptions for creatures that are incorporeal. These, obviously, exacerbate the confusion of players, and often, GMs. The pdf does thus list a variety of different misconceptions pertaining being incorporeal.

The pdf does list 3 general traits that apply to all incorporeal creatures, which *generally* are well-defined…but they are not necessarily complete in their effects listed. For example, holy water is NOT, RAW, a magical attack, but still may affect incorporeal undead, presenting an exception to the rule of nonmagical attacks not affecting incorporeal creatures. While the pdf correctly states that incorporeal creatures take half damage from bodily sources (and does NOT sport a miss chance!); however, unlike the condition, the defensive ability and subtype doe have something that probably is the source of this common misconception: Supernatural or spell-based effects that do not employ [force] and originate from a bodily source that do not cause damage have only a 50% chance of affecting an incorporeal creature. It is my conviction that the pdf should state this. It’s pretty important.

Unfortunately, the notes on the effect of the defensive quality also are not exhaustive: The list fails to mention, for example, that deflection bonuses apply; the pdf correctly states that armor, natural armor, shields etc. are ignored, but lists, with force-effects, only one of the exceptions here. The list of the defensive qualities also, irritatingly, fails to state that such creatures moving through physical objects are penalized when attacking creatures outside the object; since cover, total cover and concealment in such a case are pretty important, that should be mentioned.

Editing and formatting, per se, is very good. Layout adheres to a 2-column standard in both versions and is color, but remains pretty printer-friendly. The two versions of the pdf are nice and even come with bookmarks, despite their brevity.

I like what Michael McCarthy attempts to do here, for this is a component that should be explained. That being said, the explanation remains pretty rudimentary. Its structure is nice, but ultimately, it fails to mention a couple of crucial components, which severely detracts from the overall usefulness of the pdf. That being said, this is PWYW, and as such, a fair offering. Still, as provided, I’d personally consider it to be more feasible to just flip open the definitions of the three states and compare them. There is still value in the list that clears up the misconceptions, and it’s nice that such a book exists. My final verdict clocks in at 2.5 stars, rounded up due to in dubio pro reo.

You can get this pdf for PWYW here on OBS.