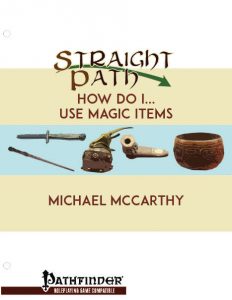 This installment of the „How do I…“-series clocks in at 9 pages, 1 page front cover, 1 page editorial/ToC, 1 page SRD, leaving us with 6 pages of content. As always with Straight Path games-supplements, we do get a second version optimized for use with tablets. This version clocks in at a total of 14 pages laid out in landscape format, but content-wise remains identical to the other version. All righty, let’s take a look!

We begin with a reiteration of categories of magic items – this list is great, particularly for newer players. There are a couple of notes I’d like to add here: While the pdf is correct in stating that unarmed attacks are usually enhanced by amulets, this is by now not the only way to affect them. It should also be noted that two spell-references in the explanation of potions have not been italicized – though the pdf correctly points out an NPC Codex issue. It should also be noted that references to precise magic items throughout the pdf have not been italicized. As another minor addition, while the pdf correctly states that staves can usually act as quarterstaffs, there are a few exotic exceptions, so a “usually” qualifier would be nice here. The pdf also lists the various forms of wondrous items and then mentions cursed items, intelligent items and artifacts, though sans elaborating on the mechanics of ego etc.

After we have established the categories , we take a look at activation types, starting with use activated items, noting potions as special and then lists the peculiarities of command word items and spell trigger and spell completion items. It should be noted that use activated magic items that require an extra action to activate, as correctly stated, do not per default provoke an attack of opportunity, unless the action undertaken to activate the item would provoke an attack of opportunity. On the plus-side: The pdf takes the notes of spell completion items and scrolls and blends them into a concise whole that is easier to grasp for new players.

Finally, the pdf mentions the Use Magic Device skill’s basics.

Editing is tight and well-done; formatting is problematic, failing to italicize pretty much all spell and magic item references. Layout adheres to a 2-column standard with a touch of color, but remains pretty printer-friendly. The pdf comes fully bookmarked for your convenience.

Michael McCarthy’s summary of how magic items work represents a really handy little pdf; while I could list all the odd exceptions to the rules presented, as a whole, this represents a concise and precise summary that can easily be handed to a new player, helping them grasp the basics of the game. As a PWYW game-aid of sorts, this is worth checking out if you’re not need a quick explanation of the basics here. All exceptions and deviations I noticed are the more obscure components that go beyond the basics – and as such, they are not necessarily required for such a pdf. While the formatting oversights are annoying, the PWYW-status of the pdf makes it a fair offering. My final verdict will hence clock in at 4.5 stars, rounded up for the purpose of this platform.