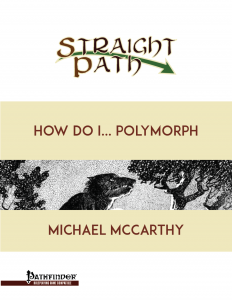 This little pdf clocks in at 7 pages, 1 page front cover, 1 page SRD/editorial/ToC, leaving us with 5 pages of content, so let’s take a look! It should be noted that the pdf comes with a second version, one optimized for e-readers that is landscape format – it#s 12 pages long and otherwise, content-wise, identical.

Now, as we all know, previous editions of the game often had…let’s say, rather byzanthine rules for shapechanging. In Pathfinder, this is easier. Comparatively. The pdf first explains, newbie-friendly, that polymorph denotes a spell – as well as a subschool of transmutation.

The pdf then lists the more common, specialized transformation spells for shapechanging (handy!) and the general ones – this explains, concisely, what type of spell you’d use for what…and then, the issue of speech is addressed. Nice: The pdf does correctly note how parrot’s won’t suddenly be able to speak and takes familiars into account; it also points towards the Expressive Pantomime solution for specialists. The ways to get past the casting limitations a new form may impose are also clearly stated.

The pdf then presents a handy bullet-point list of what you always gain and what you always lose upon shapeshifting – and we get a list of what you probably get. It is important to note that e.g. special movement or senses are not automatically bestowed, which can be awkward…having that spelled out makes sense for newer players. Similarly, having a list of what you never get is handy indeed. A minor correction here: While it is correct that a polymorph spell costs you natural attacks of a previous form, sorcerers and similar characters that can grow e.g. claws and the like as a class feature may do so in the polymorphed form! This little tidbit should probably be added.

Anyways, the pdf helpfully notes that the lesser one of special movement rates granted (base form vs. spell) is gained in an often overlooked component of the rules. Interaction between polymorph spells on a target and a handy little attribute modifier table for targets smaller than Small or larger than Large helps as well – though an additional table for size modifiers and special size modifiers would have improved this further.

Editing and formatting are very good, I noticed no serious flaws. Layout adheres to a nice two-column standard and is easy to read. The pdf comes bookmarked, in spite of its brevity and has no artworks inside.

Michael McCarthy’s handy little guide is great for novices of the game. Since polymorph, while simpler than before, is still a pretty complex collection of rules, it’s nice to have such a pdf and the option to point towards it. Now, while not 100% exhaustive, it does its intended job rather well – which is why my final verdict will be 4.5 stars, rounded up due to the PWYW nature of this handy little helper.

On another note: If you enjoy shapeshifting and want to get deeper into size-changes and the like, there’s no way past Everyman Gaming’s superb Microsized Adventures-book (Link) and the corresponding template-mini (Link)…

You can get this nifty little file here on OBS for PWYW!