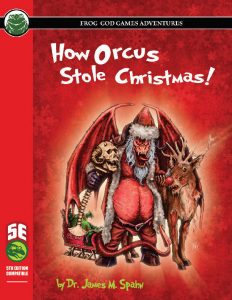 This review was moved up in my reviewing queue at the request of my patreon supporters, who bought me the 5e-version of this adventure for the purpose of a review.

This is, obviously, a holiday-adventure intended for 4-6 characters of 3rd to 5th level. This is an old-school module in its challenge posed, which means that the group should be well-rounded and capable of withstanding combat properly; this is not an easy adventure, particularly if you play the adventure at the lower indicated levels. Level 3 will be a deadly experience indeed. As a huge plus that I enjoy to see, the module’s success or failure is very much contingent on roleplaying and smart players in a couple of instances – just rolling high won’t suffice.

The module comes with fully-presented boxed read-aloud text, and deserves a special mention for one phenomenal feature: It has maps for everything, and a MASSIVE map in the back that depicts the ENTIRE REGION, including all adventure sites – and it does so without SPOILERS via legends/key or secret door indicators – you could, printer provided, print this in a huge version, and slowly unroll it as the PCs explore it. Awesome. The map is full color, by the way.

Structurally, the module is actually very linear, but it does a pretty solid job concealing this fact.

Of course, holiday module does not equate holiday module – from darkly-humorous yarns like Zzarchov Kowolski’s “Down in Yon Forest” to the DCC series of holiday modules, to Everybody Games’ masterpiece Yuletide Terror, there are plenty of different styles and themes out there. This module, as a whole, goes an odd angle: The ridiculous happiness of holiday cheer is contrasted with jaded PCs, which results in a sense of a module that feels a bit curmudgeonly regarding Christmas etc., but at the same time actually likes it. You know, like that uncle or grandpa who keeps telling you that they don’t like the holidays, but still cherishes everything related to it, even though they’d never admit to it. Unlike e.g. DCC’s modules, the theme evoked here focuses less on the pagan origins of Yuletide, and more on a Seuss-like take. This module could be seen as homage to the Grinch.

In many ways, this feels like an incredibly American holiday module, poking fun at the saccharine components of the holiday – though always in good jest, and often in a genuinely heart-warming way. If your heart is as black as mine, that is. ;P

That being said, I wouldn’t run this as written for kids – it does have a few rather dark scenes.

All righty, and that’s as far as I can go without SPOILERS. Potential players should jump ahead to the conclusion.

All right, only GMs around? Great! The module takes place in some wintry landscape, and starts off when the PCs happen upon the idyllic halfling village of Newville, with tendrils of smoke rising from it. Newville is a halfling community of painfully naïve and saccharine halflings, who, in the “rapture of holiday joy” do not notice the crueltide elves under the command of the demon known as Orcus’ Claws taking all tools and metal from the village, potentially dooming everybody here.

The halflings continue singing their cheery  songs while gathering their dead and attempting to get their village back in order – e.g. using a blade-less axe-handle; the tone here is surreal and definitely funny, something enforced by the mayor’s chocolate cookies as a kind of premium currency to get e.g. a blessing or the like.

The trail leads the PCs through the forest, where one of my favorite encounters await – a skeleton, who constantly asks questions – and attempting combat is not wise, for it can force you to dance yourself to death. It’s not malignant, however, so clever characters can get rid of the skeleton with the right roleplaying angle. I loved to see that!

The trek through the wilderness and up towards Orcus’ Claws’ workshop is mainly-defined by the unique adversaries – from evil snow-men to aforementioned crueltide elves, the individual creatures deserve special mention, for they do carry a lot of the module, going above and beyond what we usually get for 5e-critters: the crueltide elves, for example, have a whole array of weaponized toy-contraptions that include wind-up toy soldiers, deadly BB-guns, or self-wetting toys that generate slick terrain. Orcus’ Claws does have a sleigh, a magical artifact level 3-part-artifact that desperate (or vile) characters might well use…The module also contains 4 minor magical items, and we do get stats for the demonic reindeer of Orcus’ Claws – yes, with appropriately demonic names. Two of the crueltide elf bosses get individual stats, and so does Orcus’ Claws, who gets deadly lumps of coal and the potent cruel tidings ability. Combat-wise, this is a pretty awesome scenario, particularly regarding the finale, where Orcus’ Claws unleashes a snowbeast, as he makes ready to rain yuletide blight upon the land, with the clock ticking for the party to stop the sleigh. The snowbeast is a grand chaos-factor – far beyond the abilities of the party to quickly dispatch, it might well collapse the sleigh hangar, potentially “rocks fall, all die”-ing everyone, so yeah, furious and truly cool finale.

The downside here is that the module is not as consistent with the approaches it accounts for – it very much assumes a frontal approach, and while alarms are a thing, the module is not as consistent with the consequences as it should be – stealthy parties e.g. don’t get bonuses for e.g. giving in to the deal of a demonic reindeer that might well cause an alarm, nor is there a benefit to arriving in the hangar with maximum stealth. The choice, the seeming focus on consequences, is just an illusion – a well-executed one, but still. This particularly is relevant in 5e, where time is an important factor – the issue of long rest scumming is not really addressed, and while the finale makes everything seem nailbitingly close, a time limit is never properly established, which makes that component, once more, actually scripted.

Editing and formatting are very good on both a formal and rules-language level. Scott Mckinley and Edwin Nagy deserve special applause here for their 5e-conversion: I rarely get to see one that is so well-executed, that feels so organic. Layout adheres to a red-tinted variant of the usual Frog god Games’ two-column standard, with red headers and a surprising amount of full-color artworks. The pdf comes fully bookmarked for your convenience, and the presence of a proper, player-friendly version of the map of the region and dungeon is fantastic.

James M. Spahn’s holiday module was a pleasant surprise for me. This adventure might not have the ambition of being an epic yarn, but it gets the Grinch-homage angle well; from Orcus’ Claws cheerfully-bloodsoaked gown to the smaller tidbits, the theme is thoroughly well-executed. From Small Sam (obvious Dickens reference) to the other components, this does its theme well. The monsters, the encounters, the NPCs – all of that is very well executed.

However, as noted in the spoiler-section, the module is more linear and scripted than is really needs to be; to a degree where I frankly found it slightly irritating. It’d have been very easy to make this work in a less scripted/linear fashion without using up ample wordcount. So yeah, this is a good adventure; potentially a very good one, depending on how you stand regarding this type of structure, but for me, this slightly detracted from the appeal of an otherwise charming take on the Grinch. My final verdict will hence be 4 stars.

You can get this Seuss-inspired adventure here!

While I don’t have those versions, you can find the module for two more systems:

The OSR-version (For Swords & Wizardry) can be found here!

The PFRPG1-version may be found here!