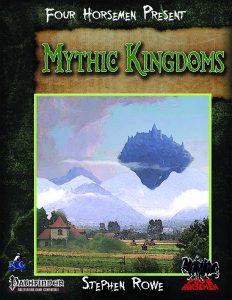 This installment of the “Four Horsemen present”-series clocks in at 16 pages, 1 page front cover, 1 page SRD, 1/2 page of editorial, leaving us with 13 1/2 pages of content, so let’s take a look!

Mythic kingdoms? Do we need the combination of mythic rules and kingdom building rules? My reply here would be a yes: While the kingdom building rules do a great job in simulating the machinations of a regular realm, and while Legendary Games’ superb books expanding upon them add aerial and underwater warfare and the like to the fray, it is a fact that the rules do not really account for wars between truly fantastic nations…or a fantastic nation going to war with more mundane civilizations. The question of what happens if Eldorado or Xin-Shalast went to war with mundane realms? You can answer that. Such fabled realms usually have fabled leaders – at the very heart of a mythic kingdom, thus, sit mythic heroes (or villains). The blending of the individual and the kingdom level is as seamless as possible, via two mythic universal path abilities, the 1st tier mythic leader and the 6th tier mythic kingdom; the former affects a settlement you govern, the latter the whole kingdom.

But what are the advantages? Well, you can grant the settlement/kingdom mythic advantages…but these must be paid for with mythic disadvantages. Each of the entries thus features a line to affect settlement and kingdom. And the mythic advantages are AMAZING. I mean…ouch. I get why you need disadvantages to balance them out. If a place, for example, has the army advantage, it receives an army of undead, golems, guardian spirits…that replenishes every day. The only way to defeat it permanently is to eliminate the source of mythic power – i.e. the characters.”We were impervious to the darkness, guarded by the ancient protectors, for as long as our kind king rules…” Yeah, this quality alone pretty much writes its own adventure….or even campaign.

The mythic advantages retain this exceedingly impressive level of quality and imaginative potential: Do you want a settlement or place that has the option to magically exile the unwanted? That can be found herein. A blessed holy city/realm to represent the fantasy-equivalent of Jerusalem/Mekka or Prester John’s realm? In this pdf. A realm prophesied to become something great? Oh, do you want a city of doors and portals that can be accessed via special keys (mythic magic items also depicted within)? A place that can be returned t via keys? Yeah, if that sounds like this nets you the tools to simulate a war with Sigil…you’d be right. What about a mythic kingdom that seems to move, being hard to find? One with legendary buildings? A repository of vast knowledge? A place with different gravity? Yup. You can making flying kingdoms…or those that bring forth particularly powerful beings by virtue of increased gravity…or a tyrannical realm, where the tyrant’s domination literally crushes those under his dominion. Magical planar traits, morphic fey realms, kingdoms that can actually *move* or those protected from negative influences…yes, this has the means of making a kingdom on…for example the negative energy plane…or making simply the city of brass. Fabulously wealthy or technologically advanced realms similarly lie within the realms (get it? sorry, will punch myself later for that…) possibility.

Now if sword & sorcery, fantasy or pretty much any other literary genre have taught us anything regarding such larger than life nations, then that they also generally tend to have a fatal flaw: Mythic disadvantages are the calamities, the chinks in the resplendent armor of these legendary nations. These, in turn, are no less unique and worthy of storytelling: Some mythic kingdoms may be struck by apathy, a crushing world-weariness; perhaps, the kingdom has been beset by a catastrophe that sent it beneath the surface of the earth…or it suffers from a horrid curse affecting magical objects. Perhaps the very people are cursed…or flow of time or gravity behaves erratically. Dead magic, restless dead stalking the streets, places that are tumbling through the planes…or those simply unnatural – if the advantages are what makes a kingdom presented here awe-inspiring, then these are what makes them grounded, what ultimately makes them an evocative place for adventurers to visit, save or condemn.

Now I already mentioned enhanced structures: Taverns with phantom steeds or ghostly carriages; healing chapels that rid pilgrims of curses – the pdf features a ridiculously simple and concise way of presenting such places. The rules presented comfortably fit on one page, but frankly, are impressive in their elegance. And then, there would be three sample settlements crafted with the rules presented herein: The clockwork fortress of Null, the Dread Necropolis and the planar crossroads that wanted to be the center of ever-changing limbo.

Editing and formatting are top-notch, I noticed neither formal, nor rules-language hiccups. Layout adheres to the 2-column full-color standard for the series and the pdf sports 2 decent full color artworks and one b/w-piece. The pdf comes fully bookmarked for your convenience.

Stephen Rowe’s Mythic Kingdoms are pretty much everything I hoped they’d be. When the horsemen asked what we’d like to see and I posted “Mythic Kingdoms”, I almost immediately regretted it; why? Because I end up disappointed more often than not by the particular execution of a concept near and dear to my heart. It is with some trepidation, but also hope that I opened this pdf; after all, Stephen Rowe is a supremely talented designer.

Well, to cut a long ramble short, he has surpassed himself here. In German, there is the colloquialism of the “eierlegende Wollmilchsau” (literally: Egg-laying Wool-milk-pig) to denote a fantastic tool that does everything at once. Mythic Kingdoms is pretty much the eierlegende Wollmilchsau of the theme, succeeding in phenomenal ways beyond my expectations. It seamlessly stitches the levels of character, settlement and kingdom together, provides a bridge between the mythic character and the kingdom, without losing the importance of the mythic character in question. The advantages and disadvantages both universally resonate with the truly fantastic, taking ample inspiration from mythology. The fact that the respective pieces of content can be applied on both a settlement and kingdom level is similarly amazing. Oh, and, as an aside, the book is exceedingly cool, even if you do not play a mythic game; the advantages and disadvantages, frankly, can be utilized by GMs beyond kingdom-building or mythic game-play to add the sense of the epic to the respective environment.

In short: This is a little masterpiece, well worth 5 stars + seal of approval as well as nomination as a candidate for my Top Ten of 2016. Whether you want more magical settlements or kingdoms, consider this a must-have purchase.

You can get this stellar, superb booklet here on OBS!