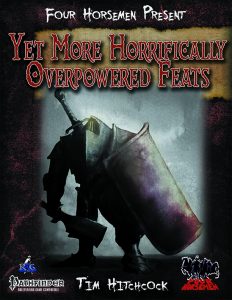 This pdf clocks in at 13 pages, 1 page front cover, 1 page editorial, 1 page SRD, leaving us with 10 pages…though these are further reduced by 1 page-version of the cover and a pretty bad 1-page piece of stock art, bringing this down to 8 pages, so let’s take a look!

All right, so I explained these feats in the “Even More...” review of Horrifically Overpowered feats, so I’m not going into that aspect again…however, this does have a new idea added to the fray: Metagaming feats. These feats allow a player to intercede in game and perform deity-like feats…but they require the player to own a focus of gaming awesomeness like the Red Box, Blackmoor or similar legendary books. Thankfully, I’d classify thus…so what do we get? 20 horrifically overpowered feats and 10 metagaming feats, so let’s dive in!

The horrifically overpowered feats follow a similar route as those employed in the “Even More”-book – with a unique twist for some. Take Admixture Elementalist. This one not only nets you a second elemental school; it also lets you mix the two energy types and activate the secondary elemental powers from the schools. Bull Rushing adjacent foes alongside the primary target is pretty awesome and something I will actually modify and use in my game. Combining sneak attack and Cleave similarly, while horrifically overpowered, works pretty amazing for the angle of the legendary assassin etc.

There is one ability that I’d never allow for players – Compound Special Ability lets you combine the numerical effects of any number or all daily uses (like bombs) in one use, enhancing the nova-phenomenon to the n-th degree. It may sound stupid, but I just can’t figure out any game in which this would enhance the flow of the game or do something beyond ridiculous numerical escalation. Not a fan.

I am, however, a fan of the feat that makes the skull of foes hit with bludgeoning weapons explode on crits. It’s got Tim Hitchcock written all over it, is powerful, exceedingly so, but I can see it work in some games rather well! Disintegrating any foe reduced to 0 HP is one that all my soul reaving bastard villains will get. Similarly, learning spells just from seeing them is cool – utterly OP for the spontaneous casters, sure…but I can see that drive a campaign of the brilliant sorceror-paragon. Oh, want to be part of a second race? Covered.

On the down-side: There is a bit of overlap here: While “Even More’s” Fringe Dogma lets you take any additional domain, regardless of deity, Master of Domains nets you one from those available, but can be taken multiple times. The feats do different things, yes…but still, the concept remains pretty similar. 3/day, looking at a spell’s damage dice and taking the highest damage, multiplying it by dice rolled is appropriate. I also really like taking -1 to atk when sneaking for the option to maximize one of the sneak attack dice – depending on the power-level of the campaign, this one can be used as a quick rogue power-upgrade hack.

Now beyond feats like this, let’s talk a bit about the Metagaming feats. They are outrageous in a good way. Forgotten Bonus? Add a retrospective bonus to a throw. “Invoke Thakko” takes us back to the THAC0 days…and is hilarious, since it comes with the caveat that if the GM can’t calculate the new AC in time, you automatically hit. I could, just fyi – THAC0 was ETW0 in Germany, but I did the calculation more times than I could conceivably count. Oh, and yes, invoking the good ole’ Weapon Speed (remember THAT?) is also part of the deal!

Loaded Die changes 1s to 20s and can be loaned to other players and Rules Lawyer lets you 1/day ignore any rule by basically stating “it does not say it can” and yet another feat lets you reforge items into other item slots…which is utterly OP. For a less OP version, look at DSP’s Steelforge Book I, just fyi. Then again, this feat is significantly less involved and works for groups that handwave such matters. 1/day undoing an event would also be one of the metagaming feats here.

Pretty amazing: Wild shaping of allies and reflexive disarm all feel appropriately OP. The Wild Magic take is similarly powerful and pretty OP; though at this point, I have seen that component done better for regular gameplay.

Editing and formatting are good, though oddly inconsistent – the subtypes of the feats aren’t bolded, while some paragraphs and entries in the table are, regardless of viewer I use. Cosmetic, sure, but somewhat aesthetically distracting still. The pdf sports mostly solid stock art and the original cover – the one-page explosion artwork is pretty sucky and blatant page-count increase…not sure why it’s here. Then again, the pdf is fairly priced for what it delivers. The pdf comes with bookmarks, but only for headers, not for the individual feats.

I like Tim Hitchcock’s Horrifically Overpowered feats more than any of the last 4 or so releases in the series; I consider the metagaming feats pure gold for fun beer-and-pretzels-style gaming and the totality can be employed for *cue in Monty Python* something completely different. I like that. Very much. Similarly, if the rogue fixes out there (like Legendary Games’ excellent “Legendary Rogues”) are too much work for you, just slapping one or more of these feats on the chassis should help. On the downside, I do think that e.g. the internal balance isn’t always perfect and that there is some minor thematic overlap in style, if not in execution, with what we’ve seen so far. Personally, this is among my favorite Horrifically Overpowered-books…but if the metagaming feats don’t interest you, this may feel slightly less appealing to you than it was for me.

If anything, this book made me think of one thing: If you’d take the superhero-flavored feats from “Even More” and this book and took the old-school style feats and the Metagaming feats and combined them in their respective books, you’d have two superior books than what we got with “Even More” and “Yet More”; the suggested combination would be more succinct and thematically consistent than what we got, but this does not render this pdf or “Even More” bad by any stretch of the word; instead, consider this a fun, inspiring little book, which, particularly with “Even More”, can provide the tools for some really fun throwback-nostalgia gaming with PFRPG’s rules. My final verdict will clock in at 4.5 stars, rounded down to 4 for the purpose of this platform.