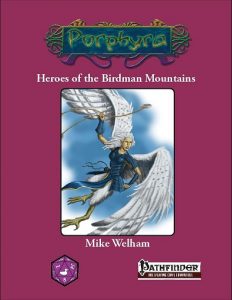 This installment of Purple Duck Games’ regional player’s guides clocks in at 57 pages, one page front cover, 1 page editorial/ToC, 1 page SRD, leaving us with a massive 54 pages of content, so let’s take a look!

After a brief piece of introductory fluff, we are introduced to the races prevalent within the birdman mountain region – which, obviously, consists of a bunch of bird-like races. Now here is a bit of a catch that GMs should be aware of: The races like harpies herein often sport 1st level unassisted flight; when they do, however, they are balanced versus the strix race. Now I *generally* am a big opponent of unassisted flight at low levels, but one has to take these races in context of the region – when terrain is so inhospitable and flight represents a requirement that results in even the local halflings having climb speeds, the array of racial traits obviously have to adhere to different requirements. Interesting: The fey-like urisk race, not appropriate for quite a few of more low-powered environments, has been streamlined herein and makes sense in the context of this region. It should be noted that half-harpies, harpies, kestrel (halfling/harpy-hybrids) and similar birdmen generally are well-balanced among themselves – they are not lopsided (i.e., they have bonuses to physical and mental attribute modifiers) and show consciousness of issues like flight in armor – though the particular modifications are interesting: While e.g. flight in medium or heavy armor is universally problematic, e.g. kestrels can’t fly while encumbered either, in line with the rules for assisted flight, whereas harpies suffer from no such explicit restriction – a bit of inconsistency here, which may or may not be intended, but considering the rather problematic presentation of flight rules in PFRPG in general and the otherwise smooth consistency between the races and their power-levels, I’d be inclined to assume the latter.

One more thing regarding the races depicted herein: Even if you take the unassisted flight away, there is material here that should work for more mainstream campaigns. The chaos-infused xax (first introduced by Alluria Publishing’s Remarkable Races-series) that fluidly change racial traits each day or the aforementioned half-harpies certainly are intriguing in just about any context. So here’s the issue I have as a reviewer: The races depicted here are, by virtue of their flight, etc., not necessarily balanced among themselves…but this is by design. The lop-sided power-levels are intentional and they actually are a vital part of what makes this region work. *slow clap* Well played. I can’t complain about that without misrepresenting the whole region.

Tl;DR regarding the races: The section is, with a minor inconsistency, one that generally is balanced, but in an uncommon manner that is very much dependent on understanding the dynamics of the region; they work in other places, provided you are aware of the significant power of fly speed some of these have. This one component should be carefully monitored, but within the context of the birdman mountains, the section can be considered to be concise and well-presented. The races also sport race traits for the races – which, again, are well-balanced.

As always, though, this book is not simply an assortment of diverse races – this book also sports basically a significant assortment of fully depicted information: You get a great full-color map of the region and the respective entries for settlements – for example the town of Harhold, carved into the mountainside, studded with ample ladders or the xax enclave of Krikoyn, the old deeps within the inside of a hollowed-out mountaintop…woa. The ruin spire within an erstwhile splendorous xax city…the settlements herein are GLORIOUS and provide truly evocative backdrops and locales to visit. The flavor texts help here as well and the settlements come with settlement options reprinted from another source for your convenience.

Personally, I also was rather surprised to see the concise rules for riding the rapids herein – brief, concise, fun. Nice to see! From CR 1 – 8, this massive book also sports several unique characters utilizing the options of this book.

The pdf also sports an assortment of class options – sorcerors can get the new avian bloodline – providing talons, high-altitude resistance and later, proper wings as well as a neat ur-bird capstone. Oh, and yes, this does come with a bloodrager variant of the bloodline. Falconer hunters get avian companions and must select one of 4 animal foci related to birds: Eagle, falcon, owl or vulture, with increased yield when summoning birds via nature’s ally spells and at high-levels, they won’t be attacked by creatures that could conceivably be considered prey. Following the standards of Purple Duck Games’ books, we do get a sample character here and for the other class options. Pretty cool: The gravity focused arcane school, based on transmutation, gets a distortion field and limited control over gravity, with the capstone option to redirect CMBs upon attackers. Oracles may now take the mystery of the open sky, tapping into themes associated with the skies – from flight to daylight and sensors and tapping into the cold or adding fatigue/exhaustion etc. to spell-based crits, the mystery is unique and thankfully comes with a cool new oracle-curse, breathless.

Fans of Dreamscarred Press’ psionics will be interested to see a new wilder surge, the skulking surge. The pdf erroneously calls this one healing surge once, but that does not take away an intriguing component – upon receiving psychic enervation, these guys turn incorporeal, become incapable of interacting with the surrounding material and lose power points. They get full movement while using Stealth and cool, Stealth-based abilities at appropriate levels. Fighters may elect to become slingers – and yes, this one makes slings actually feasible. The songbreaker bard is a great countersinger and can actually cause targets to become sickened, dispel via his harmonics and sunder items with dissonant screeches. Damn cool! The stoneheart druid gets delayed wild shape, but also tremorsense burrow speed and better means of ending e.g. petrification and similar issues – basically, a stone-themed archetype. The warren runner rogue gets improving sights, can spider climb via major magic and get climb speeds.

The pdf also provides a new 10-level-PrC, the underhold agent, which requires 5th level, gets d8 HD, 6+Int skills per level, 3/4 BAB-progression and medium Ref-save progression. The PrC allows for class advancement progression of a previous class at 1st level and every 3 levels thereafter for e.g. sneak attack or bardic performance. The PrC gets rogue talents and blends that with agent-style extraordinary suggestions they can implant in foes. All in all, an interesting PrC.

The pdf also features an assortment of diverse feats: Blinding crits with slings, chaotic surges of bonus energy damage on crits, control over chaotic xax traits…the like. The focus here, though, obviously, lies with climbing and flight – with Dive Bomb (flyby bull rush!), environmentally-dependent evasion, less falling damage, metamagic to temporarily reduce the movement rate off affected targets and Kamikaze dives that use your weight to slam into foes or jumping to grapple foes – the feats cover a lot of interesting, fun ideas, though e.g. the aforementioned complex and well-crafted Kamikaze feat should specify where in relation to the target one lands in a prone position when failing the save associated with staying aloft. Granted, this is, once again, me being a nitpicky prick.

The pdf also features an assortment of diverse spells, not all of which I consider well-made: The explosion of scree is similar to a conic fireball that deals bludgeoning/slashing damage AND it has the potential to blind foes….which may be a bit much at 3rd level. That being said, we also get options to conjure forth favorable winds or instilling vertigo in a target. The magic items herein cover slings that may transform sling stones into massive boulders, an artifact bell, which, when struck by a halfling, obliterates nearby harpies (racial tension storyline, anyone?), gloves that provide a better grip, elixirs that enhance your mountaineering…and what about a potion that acts as a wildcard placebo? Have I mentioned the Schrödinger’s box?

But one of the best, coolest traditions of this series lies in an aspect one should definitely list – one aspect where you only realize how good it is once you need it – the pdf provides massive, extensive lists of items available in the birdman mountains – weapons, armor, adventuring gear, clothing, food and drink…and yes, this does provide new options: Climber’s shortbows, gliding suits, halfling slashchains, smokeless firewood – awesome. Oh, and guess what? 3 sample traps included – yes, including wing clippers.

Editing and formatting are very good, on both a formal and rules-language level – apart from total anal-retentive minor hiccups that do not impede the functionality of the content herein. Layout adheres to Purple Duck Games’ two-column full-color standard and the pdf features quite a few neat full-color artworks. The pdf comes fully bookmarked for your convenience.

Mike Welham, with additional writing by Mark Gedak, provides the one region of Porphyra I did NOT look forward to; granted, fly speeds can be problematic and may not be appropriate for all environments or campaigns – but guess what? Overall, the balancing of the races and character options herein is TIGHT. The races generally feel well-rounded and the book has plenty of material to offer even if the GM of a campaign enforces a strict ban of unassisted flight by race; both new races and options herein are intriguing.

More relevant, if your foreign PCs visit this wondrous land, they’ll have a truly interesting tactical challenge on their hands – the supplemental feats and class options work well; but most interesting, at least to me, is the land itself – what we get here is a glimpse at a truly unique and strange land of struggles and cataclysms I can’t wait to throw at my non-birdie-player characters and hassle them with those nifty pregenerated NPCs. This is an evocative, novel environment and a type of region I have not seen before. While not perfect, this still is an overall concise and, more importantly, novel environment – and that, ladies and gentlemen, is worth a lot to me. While I would have loved to see more aerial/climbing hazards, but one can’t have everything now, right? The rapid rules are nice, though! Sure, the general assumption of flight among those peaks is not for everyone… but still; courage like in this book needs to be rewarded and hence, my final verdict will clock in at 5 stars.

You can get this cool region sourcebook/toolkit here on OBS and here on d20pfsrd.com’s shop!