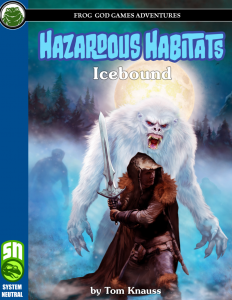 This (so far) final installment of the Hazardous Habitats-series clocks in at 44 pages, 1 page front cover, 1 page editorial, 1 page ToC, leaving us with 41 pages of content, so let’s take a look!

This review was moved up in my reviewing queue since once of my supporters prioritized covering a bunch a of the books in the series. And while they told that there’s no need to rush, I’m too OCD to leave it be, particularly when completion of a series is so imminent. Alternatively, there’s a chance that said person did not know this existed, for the series seems to have vanished from OBS (OneBookShelf = DTRPG, DM’s Guild, etc.) and currently is exclusively available on the Frog god Games store. Additionally, this is the only Hazardous Habitats-book that covers a biome that has not been previously featured in one of the excellent perilous vistas hardcover tomes for PFRPG. (An aside: Hazardous Habitats expand upon the material in the Perilous Vistas books and focus on the terrain itself – even if you do own the hardcovers, these books will have something new for you.)

Okay, so, in case you’re new to this series: These books focus on a certain biome, and discuss it in a manner that is most assuredly old-school in a way that I consider to be exceedingly valuable: Well-researched, they blend scientific facts on the respective biomes with the actually gameable fantastic via several engines, which are presented in a system agnostic manner. If you are tempted to shirk away from this premise, please don’t. You see, it might sound weird, but the assumption of these books is that roleplayers are intelligent people with eclectic interests – and that our games benefit from knowing more about biomes. Which, turns out, is rather true. Regardless of the subject matter, it is always easier to depict something you actually know at least a bit about. This is, in many ways, where these books come in very handy.

The other installments in this series were designated as system-agnostic by yours truly; the respective components provide a rough baseline of systematic rules-coverage for hazards and threats, but as a whole leave the precise mechanics up to the GM. The baseline used in these books would be D&D 5e, though functionality for PF 1 or 2 can be achieved by someone halfway versed in hacking systems; compatibility with OSR-games is simple to achieve here anyways. And yet, icebound is DIFFERENT in another crucial manner: More so than the previous installments in the series, I have designated (as you noticed in the header) as system neutral, not as system agnostic. There is a reason for that.

But we’ll return to that. We start this book with a summary of the polar biomes, and then discuss game applications before diving into not one, not two, but three polar biomes: Ice caps, tundra, and taiga.

Tables let us discern the likelihood of terrain elements, and we do receive 20 entries for flora/fauna/random encounters, before we get the eminently helpful: “Local-society-generators.” Particularly if you want to populate a hexcrawl of your own devising, these systems warrant checking out the series. You see, we have a population size table, that corresponds with a modifier, which you then apply to the d%-roll regarding demographics. These let you discern how diverse or homogeneous the respective society is; the smaller the population is, the more likely it is to be homogeneous regarding its racial makeup. This, in turn, allows you to discern the modifiers for the humanoid attitudes, which you once more determine with a d%-roll. Another d%-roll and you have a political system, another and you get the lifestyle (on the nomadic/sedentary-axis), et voilà, done. 10 events and 10 adventure seeds are added to each entry, and here you go. The seeds tend to gravitate to the relatively detailed, interesting and complex side of things, just fyi. Quick, painless, and just enough framework to extrapolate from in a helpful manner. This part of the series, which is obviously system neutral, is very useful indeed.

And yes, each biome has its own tables – on an ice cap, the terrain elements focus on snow and ice, obviously; in the tundra, we can have shallow water, peat, undergrowth, etc. These elements also note e.g. traveling speed reductions, chances of running aground – you get the gist. Additionally, terrain elements are differentiated by season.

This section complete, the next traditionally deals with getting around in the respective biome. Thus, this time around, we have polar travel. Here, we cover trails (which also include percentile values for determining settlement presence) and even the type of ice found in closed or open polar freshwater and open saltwater systems, which is relevant, of course, for travel by floe. Modes of travel are included as well, ranging from self-propulsion to vehicles, mounts, watercraft, etc. Hilariously, there is also a rather informative sidebar here regarding red-nosed reindeer.

Beyond these sections, we get tables for determining random encounters, and, of course, the weather, where the number of hours of twilight and darkness per day are noted. Additionally, we get the weather generator, which features daily high and daily low temperature tables by season, daily wind speeds, daily chances of precipitation – all by biome. Like in the other books, the utility for me, as someone who grew up with the metric system, is somewhat compromised. While windspeeds in miles per hour are something I can still picture, degrees Fahrenheit never made sense to me. Ideally, getting alternate values for kmh and degrees Celsius for those of us not accustomed to the imperial system would have been very helpful.

Note something? Yep, one of my usual complaints with the series is absent here, biome-immanently. You see, the series does usually codify parasites, poisons, etc. in a system agnostic manner that painfully makes it obvious that some aspects just need to be handled within the frameworks of the respective systems, no matter how encompassing a system agnostic take manages to be – or that the books should have focused exclusively on describing the effects and countermeasures within the frame of the narratives, i.e. not use an abstract save-engine that fits in no system. This problem is absent from this book. As a consequence, the installment focuses more on its strengths – which is a good call as far as I’m concerned.

Editing and formatting are very good on a formal and rules-language level. Layout adheres to a two-column standard that sports a TON of information per page; this book could easily have been bloated to twice the page-count, like all books in the series. Artworks include a nice drawing of an ice bear and full-color photography, which fits this book rather well. The pages have a bluish tint, but if you want to print this for your GM-tool folder, you can do so without breaking your toner/ink cartridges and going b/w is an option. The pdf comes fully bookmarked for your convenience.

Tom Knauss finishes the series (at least for now) on a high note that manages to focus more tightly on the strengths of the series than its weaknesses. Icebound’s content, biome-immanently, deals more with aspects of the biome that work simply in a smoother manner within the context of a book that does not subscribe to a singular system. While the lack of support in the weather-section for those not accustomed to the imperial measurements is still somewhat galling, I nonetheless consider this to be the installment that works best. As such, my final verdict for this book will be 5 stars.

You can purchase this pdf exclusively here on Frog God Games’ storefront.

if you enjoy my reviews, please consider leaving a direct donation via paypal, or join my patreon. Thank you.