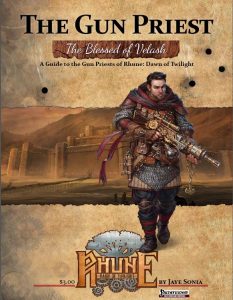 This pdf clocks in at 8 pages, 1 page front cover, 1 page editorial/introduction, 1 page SRD, leaving us with 5 pages of content, so let’s take a look!

The gunpriest is basically a hybrid of cleric and gunslinger and receives d8 HD, 2 + Int skills per level, 3/4 BAB-progression (more than sufficient for guns) and good Reflex and Will-saves. They must be, alignment-wise, within one step of their patron deity and has an appropriate aura. proficiency-wise, they know how to use simple and martial weapons, firearms and light armors. They cast prepared spells drawn from the cleric’s list and need their gun to prepare spells. Their governing attribute is Wisdom and they unlock spells of up to 6th level. As a complaint regarding the formatting: The spells per day are depicted in one column, which makes the class’s table fit one column of the layout, but makes the reading experience here a bit less pleasant than it ought to be.

Gun priests only receive one domain and begin play with a vested gun (called vested weapon in the ability, a minor inconsistency). This gun may either be a pistol or rifle and may not be sold or bartered away. The gun is treated as though it was broken by others. Pistols deal 1d6 and have a range of 39 ft; rifles deal 1d8 and have a range 0f 60 ft and a critical multiplier of x3. However, pistols also have a capacity of 4! The character obviously begins play with gunsmith. While second level only nets the lame nimble +1, 3rd unlocks channel energy (governed by Cha) and 4th level nets grit – however, the gun priest only regains grit when using the vested gun – at this level, he also unlocks deeds, which is slightly problematic: You see, he “may only perform deeds that are his level or lower” – does this mean that the gun priest may employ 3rd level deeds upon gaining grit? Or is he treated as a gunslinger -3 levels, as indicated by the delayed acquisition of grit? A slightly clarification would be in order here.

Also at 4th level, the gun priest may, as a swift action, imbue his weapon witha +1 enhancement bonus, +1 for every 4 levels beyond that. Akin to magus, soulknife and similar classes, these bonuses may be exchanged for a list of special weapon properties, to be selected from an ever increasing array, which expands at 8th level and every 4 levels thereafter. The gun priest may maintain such enhancements for a total of class level rounds per day, to be spent in 1-round-increments. 5th level and every 4 levels thereafter net a bonus combat feat.

As a capstone, the class may 1/day become an embodiment of divine wrath, being “hasted, blurred” and gains DR 10/- as well as auto-confirming all critical threats for 1 minute. While italicized and everyone knows what’s meant, de facto that’s not correct rules-lingo there…but oh well. No harm done.

A total of 8 supplemental feats can be found here: Dirty Deeds is for the evil guys…and rewards you for killing helpless and unaware creatures, but penalizes your honor…if you’re not using Rhûne…well, then this is the big bag o’ kittens feat. Wait. It is in Rhûne as well. Begs to be cheesed by comically evil gun priests… Divine Aid lets you expend a point of grit as part of channeling energy, treating 1s rolled as 2s and adding +1d6. Holy Gun makes your gun your holy symbol. Give em’ Hell lets you expend, as an immediate action, grit to change your channel energy type for a single channel. Gun Priest’s Resolve lets you reroll saves at a bonus via grit expenditure to keep you from acting dishonorably. Shoot em’ in the Face! builds on targeting and adds +2 grit to the cost, but blinds and confuses the target hit. Wrath of the Gun priest is pretty nasty: When you threaten a critical hit with your firearm, you may expend a channel energy use to automatically confirm it. Considering the damage output and the fact that the prerequisites are very low-level friendly, I’d consider this one overpowered and in need of a nerf. Wyrd Gunner lets you spend wyrd to regain grit, but fails to note the activation action of this exchange.

Editing and formatting are excellent on a formal level. On a rules-level, the language is precise, even though a few hiccups can be found. From a purely aesthetic point of view, I don’t get the sequence of class features – they are neither alphabetical, nor presented by level or any other system I could find. This does not impede the functionality of the content, though. The pdf is a beauty to behold. As in: Drool-worthy. The level of quality of art on the cover is maintained throughout and each page, even the intro, has its own full-color original piece. Impressive indeed. The pdf has no bookmarks, but needs none at this length.

Jaye Sonia’s gun priest is a nice hybrid class. It is flavorful, solid in its design and I like, generally, what I could find. Now, while it is well-executed from a formal point of view, we don’t get favored class options here and the class is pretty much a basic combination of priest and gunslinger – it does not go deep into the synergy options. The pdf could offer more entwinement between the gunslinging and cleric components to make the class feel more distinct. That being said, apart from a couple of feats as mentioned above, I have no significant complaints. Considering the excellent production values and low price-point, I will hence round up from my final verdict of 3.5 stars.