A Green Jewel They Must Possess (OSR)

A Green Jewel They Must Possess (OSR) 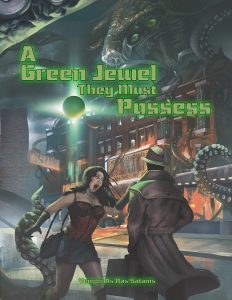 The first stand-alone module for the rules-light Outer Presence role-playing game clocks in at 11 pages, 1 page front cover, 1 page editorial, leaving us with 9 pages of content, so let’s take a look!

Before we dive into the meat and grit of the module, we are introduced with a 20-entry strong table of character subplots for PCs – whether en route towards a bad drug-habit, PTSD getting worse or having been diagnosed with terminal cancer, there is a stressor back in the PC’s mind. It is autumn in Chicago, sometime during the 1970s and the second concept to determine would be how the PCs are aligned with Ezra Jackson, their employer in this adventure.

It is him they’ll meet in a seedy restaurant…and it is here that I will need to get into SPOILERS. Potential players should jump to the conclusion.

Only GMs left? Great! Ina  recent excavation in what would become Syria, a strange sphere of unknown material was unearthed; the archaeologists died due to strange circumstances and the sphere was shipped to America. Ezra opens a musty tome, Intrusions from the Outside and notes that the object may have been a present to the high priest of the Outer Gods, one Azran at-Ra. Now here’s where the PCs come in – Ezra wants them to help him liberate the sphere from the Chicago Museum of Antiquities…and if the PCs seem hesitant, he’ll note that another group may want the sphere…and who knows what these guys may want to do with it, right?

Now, which is pretty nice in spite of the brevity of the module, we actually get some nice information the PCs unearth via investigation and the heist. The opposition of the players would be Theta Chartreuse, a splinter group of a certain paramilitary anti-mythos organization (*cough* Delta Green */cough*) who serves the dark; said foes may try to employ sorcery to steal it if mundane means fail. Ezra may well be killed or kidnapped, but the trail still remains and adept investigators may find out about Ezra’s dark secret past…but ultimately, the trail leads to an occult bookshop, where a sorceror called Arnold Strangle may or may not remain amid the living – but the main task will be to keep the indestructible sphere out of the master of Theta Chartreuse, one nasty sorceror named Von Zos….but that leaves the issue of the dread (and lethal) sphere…so how to contain it? Well, the PCs will have to find out how themselves… have I mentioned the paintings that may generate sudden, emotional shifts? Well, there are some nice little vignettes here.

Editing and formatting are very good, I noticed no significant glitches. Layout adheres to an aesthetically-pleasing two-column standard that is pretty printer-friendly and pleasing to the eye – the slight green and blood-splotch-like stains are neat! The pdf comes with several, nice and original b/w-artworks. The pdf comes with excessive bookmarks for your convenience.

Venger As’Nas Satanis’ module here builds upon the pulpy atmosphere established in “The Outer Presence” and is, actually in my book, the better module – it is more structured in its themes and narrative and tells its story well. It makes for a nice, fast-play pulp module with dark themes. Much like “The Outer Presence”, it is not horror in my book, but rather a fun, pulp module that employs classic horror tropes – it’s not scary, but it makes for a fun game. The module does well what it sets out to do and generates a solid atmosphere.

At the same time, the module does not do anything radically novel or beyond its usual genre tropes – it is a good module, a nice genre-piece, but do not expect to be totally blown away. My final verdict will hence clock in at 4.5 stars, rounded up to 5 for the purpose of the platform.

(It is also available in PoD with two other stand-alone modules for the other Kort’thalis games here!)

You can get The Outer Presence here!