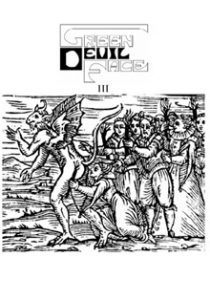 The third installment of the Green Devil Face magazine clocks in at 15 pages, the first page of which would be devoted to editorial + introduction, leaving us with 14 pages, so let’s take a look!

Alfred John Dalziel begins with an interesting pool that regrows lost limbs – but, in the case of anything but a neutral adventurer, the limb has the opposite alignment of its owner, which may result in confusion. It is also suggested to make the save potentially penalizes, depending on the amount regrown. Yeah, call be cynical, but been there, done that.

Andreas Davour has a neat, sadistic little trap: A harmless room, non-descript, really, with a treasure chest in the middle. Inside are coins…but if you open the chest, the bottom slides away and opens to a grill of lava, which proceeds to heat the coins to searing levels. Two issues here: A) Coins made of precious metals melt pretty quickly and B), no suggested damage values or even general guidelines are provided – I am aware that this is pretty much the standard for the series, but I’d honestly have appreciated some guideline here.

The next trick by the same author would be the hypercube of doom: In an alcove is a small altar, made of cubes: The altar folds in upon itself when sufficient pressure is applied. “Make something up” – yeah, sorry, that doesn’t really help me. No damage suggestions, no effect suggestions – just an opaque (and not in a good way) idea.

Andreas then proceeds to provide a relatively solid trap: A big room, mostly with some murky water, illuminated by some hazy flashes: In the middle of the dark room, a tank is precariously balanced on top of unstable poles. The tank contains electric eels. PCs will be in for a shock. Haha. Solid, in comparison to the former two.

James Edward Raggi IV is up next with “The Great Golden Ball”: Somewhere in the dungeon, there is a huge pit, huge enough to not be able to see the other side. At the 12, 3, 6 and 9 o’clock positions, chains are bolted to the floor and lead over the pit. Above the pit, anchored by the chains, is a golden ball – weightless, that will rip itself free sans the support of all chains and fly upwards…indefinitely. Actually attempting to get this treasure will potentially get PCs killed…and they’ll only have themselves to blame. Pretty cool!

His second contribution is a nice twist: You have a cavern, incredibly life-like hooded adventurers with hauls of treasure galore turned into statues, and a chained woman with strange upstanding hair…who actually is not a medusa, but rather a harmless, dressed up damsel, forced by mastermind xyz to behave as though she was one. Oh, and add giant snake. Oh, and the pretrified persons? Those actually *ARE* medusae…so de-petrifying them…bad idea. Their treasure also is a ruse, obviously.

Nasty set-up for a BBEG: Throne + lever. Flip the lever and all but safe zones start getting nasty spikes. Safe zones are subject to silence. Simple, but effective.

Akseli Envall presents the Zigzag Path of Doom, which is actually a square sequence of rooms, wherein lethal traps describe the eponymous zigzagging path of maiming, mayhem and death, which makes sense in particular for lived-in-dungeons that require a creature to have an easy way to access a treasure vault etc. Solid!

Caleb Jensen’s contribution…rocks: The PCs happen upon a mummified corpse, warning them of the red stream. They hear mewing. They see a dire wolf seemingly attacking wild horses…and then realize that it is actually frolicking with them! The source of the mewing are Mer-fish, adorable piscine kittens. All’s well as long as you don’t have riding animals. Such beings will be enchanted by the adorably annoying kittens. Those wearing leather will potentially be spit upon by the kittens, cursing them and forcing them to basically become the annoying kind of die-hard vegans that screams “Murder” (here: literally) when anyone nearby eats meat and even vomit. Yeah, that’ll go rather well in a quasi-medieval fantasy world…

Settembrini brings us a weird puzzle room – in the best of ways: Two strange basins with weird waters, some tools…and the option to grow Gelatinous Oozes – something that, once the PCs have discovered and survived, may become an interesting, if unreliable weapon.

Chris Weller’s Swallow of Summoning is basically a magical swallow that can convey your messages and force those that listen to them to heed your requests….which is a nice idea.

Editing and formatting are very good, I noticed no significant hiccups. Layout is no-frills b/w-1-column sans graphical elements and you can fit 4 of the pages on one letterpack or A4-page, if you print them out and don’t mind relatively small fonts. The cartography, where present, does its minimalist job. Front and back cover are contained in a separate pdf and the issue comes with versions optimized both for US-letterpack and European A4-sizes, which is neat.

This collection of encounters is generally an interesting one that features some nice ideas…though frankly, I was somewhat less blown away by this one, especially in comparison to the first two GDFs. The tricks here are more common and there is a good chance that veteran GMs may have pulled off one or two of them already, which does diminish the appeal of the magazine, at least for me. While certainly not bad for the low and fair price-point, I can’t go higher than 3.5 stars on this one, rounded down.

You can get this inexpensive magazine here on OBS!