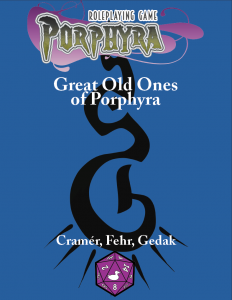 This installment of the „…of Porphyra“-series clocks in at 38 pages, 1 page front cover, 1 page SRD…and that’s it – the rest are 36 pages of content so let’s take a look!

Now, in case you were wondering: Porphyra RPG is basically an evolution of first edition Pathfinder. While the system has a couple of differences when compared to PF1, it is close enough to it to allow for pretty seamless use of PF1-content. The Porphyra RPG has finally left beta-status behind, so expect to see me take a look at it in detail very soon.

Okay, so, that out of the way, why should you care about yet another supplement depicting the mythos entities? Well, what about the fact that they are actually seamlessly integrated within the lore of Porphyra? As far as I’m concerned, that’s a big plus – it’s very much established how they interact with the Elemental Lords (who btw. banished them!) and the NewGods – the arrival of the latter has, among other things, also allowed the Great old Ones to attempt to worm their way back into the hearts and minds of mortals. It should also be noted that this does not end on the divine level – the snail-race zif, for example, is tapping into Cthulhu’s power, but is very much aware of how dangerous the entity is, and thus does not worship him, acting more as jailers. Similarly, the pdf acknowledges that the creativity Hastur can foster, the sheer rationality of Nyarlathotep, that all these can potentially have (at least short-term) beneficent effects. The Great Old Ones are listed in a handy table with domains and favored weapons noted, alongside which type of energy their clerics channel. A very cool aspect of Porphyra is that clerics etc. have a code of conduct that is different for each deity – and as such, codes for all the Great old Ones are provided. And guess what? There are plenty of cool ones here, and none of the annoying “Be evil blarghlblarghl”-BS. Servants of Dagon, for example, may only eat what is taken from the sea by their hands or that of others, and must address older males as “Father”, younger ones as “Son.” See what this does? It provides a roleplaying impetus! I love it!

Anyhow, after this introductory section, we go on to take a look at the respective individual write-ups for the Great Old Ones: Cthulhu, Dagon, hastur, Nyarlathotep, Shub-Niggurath, Tsathoggua, Yig and Yog-Sothoth are covered, just fyi. Each entry lists sample worshipers, domains, the channeled energy, favored weapon, favored creature and favored instrument. Each of the write-ups also features a note on the legend underlying the entity in question, notes of the cult, and a spell preparation ritual that grants you bonuses when you undertake it – I love these, though e.g. the one for Yog-Sothoth is missing a “DC” in its “Intelligence 11 ability check.”. Each of the Great old Ones also features two religion traits. Unfortunate: The bonus types these provide are not codified correctly – they should provide trait bonuses, and are instead untyped herein. They do make use of a couple of Porphyra RPG’s innovations, for example Craft Points – one of Cthulhu’s religion traits nets you 60 of those….which probably should be upgraded, as the Porphyra RPG has another trait that instead yields a whopping 300 Craft Points! Anyhow, another thing you’ll note, is that spell-reference are no longer in italics in Porphyra RPG – I get why, as it makes formatting easier, but it does imho decrease the immediate readability of the text slightly. Each of the Great Old Ones btw. comes with a full-color (un-)holy symbol, which is something I very much liked seeing.

The write-ups of the Great Old Ones out of the way, we dive next into the section on integrating them into your game, which includes notes of player character cultists, which includes two human-blooded new races, the Kayanoi, who get +2 to ability score of their choice, 30 ft. base speed, a bonus feat and the extra skill rank per level, but also an additional starting language and +2 to saves vs. confusion, fear and madness. The save bonus should be codified as racial. The Sikayans lose the bonus feat, but get +2 to Survival (bonus type missing) and something cool: When affected by madness, confusion, fear, etc., they can choose to replace the condition with being frightened for the same duration. This should probably specify that this instance of being frightened may not be alleviated, otherwise, this ability begs to be cheesed. They also can ignore difficult terrain created by bogs, peat and shallow waters, or, if from the desert, that created by sand or shallow water. Both come with two nice race traits, though, once more, where present, the pdf doesn’t specify the correct bonus type.

The pdf then proceeds to provide 10 new [mythos]-spells – these are only on the spell-list of servants of the Great old Ones, and they retain the spell rarity rules Porphrya RPG introduced – still a pretty big fan of them! From temporary exiles in maddening dimensions via Assault from Beyond to the narratively-interesting contact creature, which lets you send over vast distances a call, much like the ones that fuel so many stories, these are conceptually nice. Also new in Porphyra RPG: there now is radiance damage, and e.g. the Flame of Aurex uses it. As a minor complaint – another spell references resistance to light, which should probably be radiance. Wrenching scream is a nice low-level spell that deals minor damage and hampers spellcasting etc. short-term – I like it, but its damage type is untyped, which it shouldn’t be. All in all, I liked the spells herein (there are more than those I mentioned), but there also are a couple of minor rough spots in the details.

The book then proceeds to summarize the rules from the impressive Spellbooks of Porphyra-supplement (which are still elegant and nice) and then proceeds to provide the classics: The Book of Azathoth, the Book of Eibon, Dhol Chants, Necromonicon, the Seven Cryptical Books of Hsan, The Curse of Yig, The King in Yellow, and, of course, Unspeakable Cults, are provided. As an aside: The lore butchered the book’s title from the get-go: It’s actually either “Von Unaussprechlichen Kulten”, oder “Unaussprechliche Kulte” in proper German, but that just as an aside. Each of these mighty tomes comes with its own list of spells contained, preparation ritual and lore – and a curse; these curses are often very roleplaying-centric, which is a good thing as far as I’m concerned. I don’t need, nor want, e.g. the user’s understanding of reality being undermined by Tsathoggua’s Weltanschauung codified as a paltry penalty. Good call!

Editing and formatting suffer a bit on a rules language level from this pdf being released prior to the finished Porphyra RPG; this particularly shows up in a couple of components, such as bonus and damage types. As a whole, this book doesn’t fall apart due to this, but it’s perceptible and makes it feel rougher around the edges than it deserved. Layout adheres to a printer-friendly two-column b/w-standard, with purple highlights providing color. The pdf has a surprising amount of nice full-color artworks, and e.g. the symbols for the Great Old Ones are very much appreciated. The pdf comes fully bookmarked for your convenience.

I am left with a weird task here, regarding this book penned by Carl Cramér, Perry Fehr and Mark Gedak. You see, from a mechanical point of view, this is actually pretty cohesive and concise, but feels like its bonus types were left out until Porphyra RPG was finalized. So, what am I to do? I could penalize the pdf for its inconsistencies, such as regarding the Craft Point discrepancy noted in the beginning, but that wouldn’t necessarily be fair. Plus, considering the cool aspects herein, there also is quite a lot to like – for example the fact that this does not feel like it glues the Great Old Ones to an existing fantasy cosmology. I can’t emphasize enough how much I like seeing them better integrated into the overall narrative. The spells, such as the one that confuses movement via non-Euclidian chaos, also sport a couple of pretty cool angles.

And yet, as a person, I am also suffering from a bit of fatigue regarding the by now pretty well-documented Great Old Ones. Ultimately, I am rather torn on where to go with this pdf – on one hand, I consider it to have too many formal snafus to warrant a formal recommendation, and on the other hand, complaining about them isn’t entirely fair in this instance. After much deliberation, my final verdict will be 3.5 stars; personally, I will round down. However, if you are looking for a well-crafted fantasy-take on the mythos, then you may want to round up. My official reviewer’s rating will round up due to in dubio pro reo.

You can get the Porphyra RPG here!

You can support the creation of more Porphyra RPG-content here on patreon!