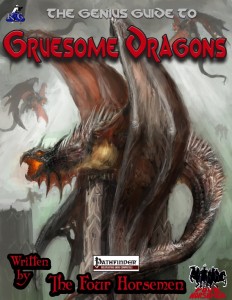 This massive supplement clocks in at 53 pages, 1 page front cover, 1 page advertisement, 1 page SRD, 1 page editorial, leaving us with a more than solid 49 pages of content, so let’s take a look!

So, in case you’re not are – gruesome monsters in Rogue Genius Games’ terminology point towards templates that can be applied to creatures, usually of a certain type – here, dragons. (D’unh!) These templates sport a fear-rating mechanic called shock value, which, while optional, make them especially useful for gritty/horror games. Better yet (and even more crucial) – the gruesome creatures sport knowledge check-modifications to glean information on the creatures AND reward players that fight smart/do their homework – for gruesome creatures may be exceedingly powerful, but they also sport one or more weaknesses that help dealing with them. Coming from a background of hardcore Ravenloft-DMing, this particular design philosophy is very near and dear to my heart. It should also be noted that each template herein comes with a sample creature, all ready for direct insertion into your home game.

That being said, what exactly can one expect from such an array of dragons? Well, first of all – templates. Lots of them. And unlike quite a few I’ve seen over the years, these come with quite an array of interesting special offensive/defensive abilities to set the creatures apart. Take the very first dragon herein, the acrid dragon. Striking these fellows with a slashing or piercing weapon damages the weapon – which is damn cool! I just wished the template wouldn’t use the wobbly “energy damage” as a terminology and instead settled for, I don’t know, force or just remain untyped. Yes, a nitpick, but a glitch nonetheless. Also, a glitch that extends to the elemental aura, which, while 100% obvious in what it means, also falls prey to this. Now don’t get me wrong, this template remains very much operable and working…but it still technically could have been slightly more concise. (And yes, this is officially nitpick-land…beware, rabid spirits of the end-times a-roaming’…)

This is especially odd since the added energy damage to regular attacks follows proper wording procedures and aligns its bonus damage in an unmistakable way with the breath weapon’s energy type. Same goes for the death-detonation these creatures emit when destroyed – once again, the wording here is airtight. Now at this point, you’ll realize another nice trick of the templates – following the size-progression of dragons, gruesome dragons of certain sizes receive additional, particularly nasty tricks to pull off – here, we’d receive an aura that automatically ruins potions et. al. (With a save for attended objects, but still…OUCH – I love it!) On the weakness-side, these dragons LACK a breath-weapon…which makes combat against them a whole different deal.

Of course, the iconic bone dragons can be found herein as well – including channel resistance, phylactery, resting in scattered form (including rapid autohealing and yes, telekinetic control over bones…on the downside, the lack of scales also deprives these creatures of energy immunities… Brittle dragons also are rather interesting – afflicted by constant growth of their bony protrusions, these dragons have fast healing, but at the same time, their rampant, out of control growth makes their bones fragile. Oh, and teeth/claws breaking off in wounds are NOT healthy for the recipients. Worse, at higher levels, their fragility extends to quite a few other beings within their aura…

What can be worse than a dragon? For anyone with arachnophobia (and a large number of people exhibit this…), the drachnid would serve as an excellent answer. A terrifying (and lavishly-illustrated) example of nastiness, these beings not only receive custom spell-like abilities, they also add a web to their breath.- Yeah, nasty…but perhaps you can use their cruelty and unwillingness to go for a quick kill to your advantage. Well, you better should, for these foes are capital D deadly.

Ether dragons take the planar highjacking/near ethereal battles to a whole different level – and anyone who has ever run an ethereal filcher with class level against PCs knows how deadly that strategy can be for the unprepared. Now think “dragon.” Yeah, these guys WILL frighten your PCs.

Not enough? Would you rather have something…mythic? Well, know how dragons are incredibly arrogant? It should come as no surprise that the false god, a particularly nasty example of the draconic ilk, can draw power from its followers’ fanaticism – and grant their believers a part of their power. if played right, these dragons can be utterly fearsome. Two thumbs up!

What would have happened if a certain Dr Victor F. had access to draconic corpses? Well, the fleshwired dragon would be the answer to that. And you thought regular flesh golems were bad news. Oh, and yes, using their asymmetric nature against them may prove your melee guys’ one chance of survival…nasty indeed! Compared to that, the glutton dragon feels pretty straight-forward. Hermit dragons are not necessarily solitary old coots – they are afflicted by something that destroys their scales, requiring them to graft pieces of armor to their flesh. Hoarder dragons on the other hand tend to accumulate…everything, creating deadly lairs where conditions not only are unsanitary, but where the debris cluttering everything might actually be used against the PCs.

Truly frightful would also be the mind-collectors -dragons that obsess over living minds and endeavor to capture them within their gems, leaving comatose shells of their victims…an obsession smart adventurers can turn against the draconic threat. Still, personally, for a me a particularly creepy concept. Plagued dragons once again can be considered harbingers of exactly what’s on the lid – plagues. Nasty and pretty iconic would be the spawnwyrm – clad in a shroud of defensive eggs, these beings can unleash swarms of deadly spawns while being at the same time utterly overprotective. These things make for a great way to insert a sense of the alien and inhumane into the context of dragons and explore a very interesting frame of mind that is distinctly non-mammalian.

Want MORE? Well, what about no less than 5 new dragon types, so-called abhorrent dragons? These beings have a certain, slightly Lovecraftian vibe and are theme-wise just as nasty as their monikers suggest – aberrant, breeder, destructive, corruptive, maddening. They come with 3 sample statblocks each as well as full draconic age-category progression…and you know me. I love nasty dragons. I love well-executed Lovecraftiana…and you gotta love dragons with decadence-auras or those that can spontaneously birth aberrations…right? Right!

The last 4 pages of the pdf are devoted to various new spells, with 6 progressively stronger means of animating a hoard to better flight, tighter, missile-like breath (to avoid killing allies…for example) to transferring your breath weapon to a creature, which not only is rent asunder by it, but also serves as the focus point for it…can I hear “false god gambit”? Yes. What about a spell that keeps a target alive, in order to allow the dragon to paralyze foes longer? Flensing foes? Automatic undead-ification of the next foe you slay? What about a spell that allows your next grapple to deal 10 x caster level force damage? Yeah, ouch! These spells are powerful and worthy of dragons…I’m not sure I’d allow them for PCs (or dragon PCs, for that matter, if you’re using In the Company of Dragons or the Dracomancer…), but as nasty BBEG-spells…heck yeah, they work!

Editing and formatting are pretty tight, though not perfect – I noticed a couple of instances where yours truly could nitpick specific wordings, as demonstrated in the beginning of the review. Layout adheres to a printer-friendly two-column standard in full-color, with plenty of downright GORGEOUS artworks on par with the cover. The art does not adhere to a uniform style, though – we also receive some nice Jacob Blackmon originals (love your work!) as well as a few CGI-models (which personally, I don’t like as much). The pdf comes with excessive, nested bookmarks.

The Four Horsemen have crafted a great supplement of truly nasty draconic templates here. The design decisions, more often than not, have at least one unique, far-out ability, an interesting tactical option or something I haven’t seen in a d20-based draconic variant – which is to say something. Now yes, some classics like the bone dragon, the eats-all-dragon etc. are less inspired, are representations of tropes that have been done before…but the sheer fact that the pdf managed to bring up some ideas I haven’t seen before is worth quite a bit in my book. Is the pdf perfect? No, but it *is* rather inspiring. I ADORE the false god-template (which I’ll develop further with Legendary Games’ supplements) and it provides an excellent bang for buck ratio. I always value creativity over mechanical perfection and quite honestly, this pdf is pretty awesome in both regards, though the latter imho could have used some slight finetuning. Still, this represents a great resource for DMs seeking to make their dragons frightening again AND reward their players for intelligent fighting. And I *really*, really like that. AND, while not all templates herein are absolutely mind-blowing, some constitute the coolest templates I’ve seen in any non-Rite Publishing-book. The Book of Monster Templates still is one of THE staples in my own home game. Hence, my final verdict will clock in at 5 stars + seal of approval – these dragons are just too cool!

You can get this cool book of draconic templates and supplemental material here on OBS and here on d20pfsrd.com’s shop!