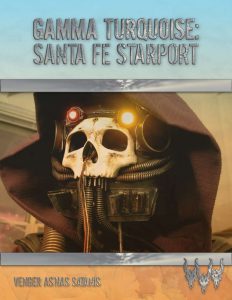 This pdf clocks in at 34 pages, 1 page front cover, 1 page kort’thalis glyph, 1 page editorial, 1 page back cover, leaving us with 30 pages of content, so let’s take a look!

Now, first of all, what is this? Well, this is basically a sandbox supplement that is almost system neutral and setting agnostic. What do I mean by this? Well, one way of using this pdf is to use it as a hub in a post-apocalyptic game or as a grab-bag in that regard. The second use would be to make this a rather punk-aesthetics cantina-like region of Mad Maxy proportions in conjunction with scifi RPGs like Alpha Blue. In either way, the free Death Race-mini-game makes for a potential tie-in here. Since the rules-system assumed is Venger’s rules-lite VSd6, you will not encounter a lot of complex mechanical bits; the pdf focuses mainly on setting up the atmosphere.

Now, as a potential supplement for Alpha Blue, this supplement does mention sex and associated themes; a couple of the artworks sport exposed nipples, so if that type of thing offends you, then this may not be for you. That being said, compared with many Alpha Blue supplements, this is definitely on the tame side in that regard.

Following this type of dual use, the pdf starts with two tables: One that contains 6 reasons why starfaring PCs can’t immediately leave and another one assumes the PCs have been exiled as a rite of passage of sorts, being native – this table spans a massive 100 entries and is pretty fun, sporting anything from car phones to the 6th edition DMG, foreword by Venger As’Nas Satanis. Hey, it could happen!

A table of 20 myths and legends speaks of starmen that will unite the tribes, of cannibals in the wasteland and that there may well be Lady Liberty buried somewhere in the sands: “That means this is Earth!?! Wait, everyone already knew that? Oh yeah… never mind then.” Notice something? Yes, this is actually genuinely funny in quite a lot of the entries; in fact, it may be the most fun supplement in that regard since the original (and imho superior) Crimson Dragon Slayer. Have I mentioned the large Hard-on collider? (Yes, puerile. But honestly, I really got a laugh out of this one and puns of that caliber are what I throw around, so yeah…) And yes, dread MeowMeowBeenz may well be the future’s currency… D’unh-D’unh-Dunh!

The pdf also sports a table of 20 mutations, which include growing an additional penis or vagina, flesh like shimmering scales or the ability to hear perverted thought-waves. And vagina dentata or penis-worm-demons. A list of 12 weird customs is also included: Like dosing yourself in orange tang powder to stave off scurvy. Speaking of the gods requires a hand-gesture that also doubles, oddly, as the sequences for checking spacesuit seals. Punks adorn themselves with cock-rat and scorpion-skunk bones. And only cool guys wear fedoras. Purple, obviously, is bad luck.

Next up, we have 8 human factions: Sportos focus on athletic prowess; motorheads love vehicles and worship, obviously, the mystical “Ace of Spades;” they are also at war with the violent Bloods, who are basically post-apocalyptic blood-and-soil extremists. Geeks read, study and homebrew tables and are, basically, intellectuals and gamers. Sluts…are self-explanatory Wastoids are survivalists, dweebies are the guys that do the menial tasks and keep things running. Dickheads…are…well, bastards. Each of the factions lists what they can offer typically to the PCs. 12 rites of passage can also be found and include facing off with foes of other factions, ingesting potentially deadly jell-babies…or having your genitals pierced with bat bones.

Now, we get a really nice overview map of the wasteland (in color, with blood-splotches and faction areas noted), and we learn next about areas of interest: These include the forbidden zone, where the AI God of Many Faces creates mechanical animals to hunt down humanoids; the super-library Strax; the Z’roids that war between red and blue factions (Amazing reference to the old-school, hard-core Z-series)…It should be noted that encountering the Z’roids and how they react is elaborated upon in more depth later.

Hills with electric eyes should be an obvious reference. There are also three post-apocalyptic wizard towers; each of the wizards has a third of The Nocticulent Yearnings of Demons Undreamt, which, when completed, can have the Dark Ones return! In New Albuquerque (or Abulakwurq’ee), the largest city-state, the High Priest of Purifying Flame Mayo-Axe rules with an iron fist; the eponymous starport is vast, and yes, we also get a cantina. The Fuck Off Cantina. The bartender is a humanoid grasshopper. The stalls have no toilet paper, but sea shells and 6 random reactions can be found. 4 additional angles make using this easier.

Now starport and New Albuquerque are connected by Route 666, which makes for a solid way to integrate Death Race, should the random encounters not suffice. Cool: We get 3 monsters: The turquoise worm, the tentacled tentacle and the cactus critter. 6 random hazards can make the trek through the desert more interesting. Speaking of monsters: In the northern mountains, there is the Doom that Came to Taos, the endboss of the region, nigh unstoppable, even with starship weaponry. All tremble before the giant mutant squirrel and its 7d6 dice pool and 3 attacks. OUCH. The treasure is interesting here as well, tying into the story of a hermit named…Obi Wan’k. And there is a command phrase to activate a unique item. Gunter glieben glauten globen. Yes, got that reference. No, it doesn’t mean anything in German, though “Gunter” is a male name.

The town of Abulakwurq’ee also comes with a marketplace section of sorts – a table to determine what the market provides and prices: BBQ crock-rats, jars full of chilies, mind-controlled dildos…and in a less stable economy, price may vary as well, obviously. With the town under the rules of a fanatic, the concept of genetic infidels has been introduced and some claim that the caverns beneath have been taken over by Skull-Face and his death cult. Yes, the reference to several classics and e.g. Six Strings Samurai is probably intended. Yes, he has a plan. And he gets stats, and so do his cultists.

Beyond that, we have several extended adventure hooks that may be blended together, should you want to: From smuggling out contraband past the checkpoint, to…donating to save a dying race to an Alpha Blue archive of dirty secrets…and there is an Android revolution going on. They’re incredibly life-like, look like gorgeous humans…and they are sick and tired of being groped and treated like crap. They are led by former sex slave bot “Doctor Cute Butt”, now known as Doctor X, who is NOT particularly fond of biological life anymore. And honestly…that’s understandable. She and two of her fellows get stats and a couple of warning signs can make the PCs realize the upcoming uprising, doubling as signs to get away…or, well, you know, join? Security droids and not all androids and their role in the proceedings are also explained, including a potentially less extremist ally with complete stats. Once the revolution is unleashed, the SJAs (Social Justice Andoids) will pull out the castration machine…

We close with a 12-entry name-table. It should also be noted that the pdf comes with absolutely phenomenal maps: Glynn Seal provides an absolute GORGEOUS high-res jpg.schematic (300 dpi; 34 x22) of desert rovers (including internal layout etc.) and we also get a similarly phenomenal map of the starport. Even if the raunchy tone of the supplement is something you absolutely despise, the maps may well warrant getting the pdf on its own.

Editing and formatting are top-notch, I noticed no significant issues. Layout adheres to a gorgeous two-column full-color standard that sports both blue and desert-orange. The pdf is absolutely gorgeous to look at. Easily my favorite layout in the Kort’thalis catalogue of pdfs. The artworks are mostly b/w and, as always for Kort’thalis Publishing, are top-quality. In short, this is a beautiful pdf. However, the maps are my absolutely favorites this time around, looking even better than the usual, impressive maps we get for Alpha Blue supplements. Glynn Seal outdid himself here. The pdf comes with a second, more printer-friendly version that is also smaller: The full-details pdf clocks in at 180 mbs, the more printer-friendly version at ~40. Both versions come with extensive bookmarks for your convenience.

This is Venger As’Nas Satanis at his best. We get relevant stats for everything; creative critters, hilarious tables – everything the heart desires. This is basically a mini sandbox that should fit in seamlessly with most gonzo, post-apocalypse, scifi or space opera games and anything beyond. If the sleazy references don’t bother you, then this will have you grin and chuckle left and right. This can be genuinely funny.

The pdf can seamlessly be dropped into most games with minimum hassle, whether that’s Traveller, Starfinder, etc. – and frankly, even if you are disgusted by anything remotely sexual, then the phenomenal maps still warrant the fair asking price, which was, as per the writing of this review, $6.66.

If you like Alpha Blue, then this is an absolute no-brainer: It is the funniest and best supplement Venger has penned so far; the organization and ease in which it can be used also shows that Venger has learned how to better organize content, making this work much more smoothly. This is one of my favorite offerings in all of his supplements, with only the legendary Purple Islands meeting that level of awesomeness. My final verdict will clock in at 5 stars + seal of approval. If “gonzo wasteland” even remotely strikes a chord with you, get this!

You can get this amazing, funny, almost system neutral supplement here on OBS!