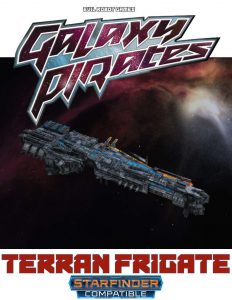 This installment of the ship-series by evil Robot games clocks in at 16 pages, 1 page front cover, 1 page SRD, leaving us with 13 pages of content, so let’s take a look!

The terran frigate’s base version is a tier 6 Large destroyer that comes with light 60 shields, evenly distributed, with a  Arcus Maximum power core and a signal basic hyperdrive; weaponry-wise, we get heavy laser canon and heavy torpedo launcher on the front, light torpedo launchers on ort and starboard, and coilgun turret; on the defense, mk 4 armor and defences, basic medium-ranged sensors and a mk2 duonode. As always, the stats are complemented by a table that lists the Dcs required for the PCs to actually know about the ship’s interior and weaponry.

As always in the series, we get additional stats: We have the tier 9 elite custom frigate (powered by Pulse Orange) with better all-around defensive and offensive options, as befitting of tier 9; on the other side, a battle-damaged frigate at tier 4, and a tier 10 mighty blockade runner are also included; the latter deserves special mention, because it is not a linear upscale of the tier 9 ship, but has radically-different weapon-loadouts – in play, the difference in the ships’ focuses really shows. Much to my enjoyment, we get more, though: each of the 4 write-ups notes famous ships and provides a brief hook, as well as some name suggestions – when a ship is written off as a total loss and becomes a damaged frigate, for example, the name is usually changed to include something related to fire, like “Erebus”, “Fury”, or “Phoenix”; blockade runners, on the other hand, as vessels breaking through enemy lines, often get names/components like “Implacable” or “Steadfast.” It’s a small thing, but it shows care.

Now, as you know by now, we get a proper 1-page art-spread of the ship from both front and back (which you could also use to represent two different ships…just sayin’), but this time around, we also get a one-page artwork of a soldier. As always in the series, we do get filled-in versions of Evil Robot Games’ neat ship-sheets; we get the paper-mini-style page as well, of course…oh, and guess what? The maps of each of the two decks this time around are so massive, they take up two pages! I kind you not.

I can’t say enough positive things about the details of the maps: Here a chair that’s not straight, there a couple different tech stations/computers, different tables and engines, and yet all’s subservient to an overall aesthetic that makes the place feel organic and lived in. Crew quarters’ common areas has unified chairs and table-placement, but working desks? There you can see differences in tech. You can point on a part of the map and state “XYZ is here” – and it’s visible. The map does note weapons, gunnery stations, etc. in big fat letters…so boo? NO! It is my pleasure to report that the massive ship’s two levels both come with proper VTT-ready, PLAYER-FRIENDLY maps. I love it. Particularly right now.

Editing and formatting are very good as a whole; apart from the persistent “DC’s”-typo for the plural form, I noticed nothing that would impede anyone’s enjoyment of this offering in a serious manner. The pdf adheres to a two-column full-color standard with a white background, making printing out of shipsheets, stats, etc. no problem regarding printer/toner-expenditure. The pdf has no bookmarks, but doesn’t need any. The frigate model by CGPitbull deserves special applause: The ship looks AMAZING, and Keera McNeill also did a great job – aesthetics-wise, this is a beautiful ship. The maps by Matthew Francella also deserve a big shout-out: They are full-color, and, as noted, are presented in player/VTT-friendly versions – huge plus in utility right there.

Okay, so let’s make that clear: Sometimes, size does matter. Case in point: This installment. Paul Fields and Jim Milligan have written essentially both a ready to use ship, and made a fantasy of mine come true. You see, I enjoy switching between starship combat and regular combat, I like running scenarios where you infiltrate a ship or hijack it, but map-wise, particularly larger ships tend to not exactly grow on trees. This handy book delivers a great map you can use as an adventure backdrop, a home away from home for the players (think of Firefly’s ship-centric episodes – this one could carry that sort of thing), and has the stats done for you as well. I know I’ll provide this one to my players as soon as their current characters reach the appropriate level…you see, I have a couple of nasty things planned…

So, is this worth the asking price? Heck yes! It also lets you send a sign: If you’re like me and want more BIG SHIPS, then do yourself a favor and get this. 5 stars + seal of approval.

You can get this massive, cool ship right here on OBS!

If you’re enjoying my reviews, please consider leaving a direct donation, or joining my patreon. Every bit helps.