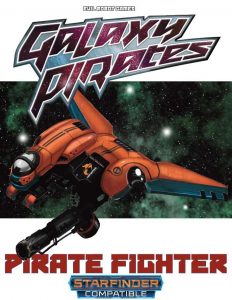 This installment of the Ship-centric Galaxy Pirates supplements for Starfinder clocks in at 5 pages, 1 page front cover, leaving us with 4 pages of content – for the pdf that sports “demo” at the end. You see, this actually comes with a second version that I consider to be the true iteration of the pdf – that one clocks in at no less than 15 pages, of which 1 page is taken up by the front cover, 1 by the SRD.

So, how come? Well, the pdf is somewhat akin to the ship-pdfs by Evil Robot Games that I’ve covered so far: We get a fantastic artwork of the ship in question, presented as a damn cool 1-page artwork/handout. We also get a page of paper-mini-style small artwork versions of these.

HOWEVER, the pdf does also represent an evolution in several crucial components: The first, and most important evolution would be that the pdf does not simply present a single ship. Instead, there are no less than 7 (!!) ships, with full stats included. All of these are pirate fighters – the base version comes with a micron light power core, a gyrolaser and mk 3 armor and defenses, clocking in at a tier 1/3 interceptor with 30 BP. Like all the ships herein, we get proper crew modifiers for the pilot, and a little table of Computer Check DCs to glean information for it.

That would be the basic, stock pirate fighter – the pdf then proceeds to present an advanced gun-fighter, which, at 40 BP and tier ½ is powered by a micron heavy power core and comes with a coilgun – and a MK1 mononode computer! But perhaps you prefer raw power over mk 4 armor and defenses and a better computer? Well also at tier ½, there would be a variant that comes equipped with a micron light power core and a chain cannon instead – though, obviously, this means that compromises had to be made regarding defenses. On the other side of the spectrum, the heavy armored fighter would be a variant that has a gyrolaser and with mk 5 armor and mk 6 defenses certainly is…well, better defended! You get to choose! Really cool!

However, unlike in previous pdfs, there are variants provided – the ace pirate fighter, at tier 2 and 75 build points, for example, comes with a signal basic drift engine, a pulse black power core and forward-facing weaponry that includes a coilgun and a light torpedo launcher…oh, and aft? Actually defended in contrast to most fighters – a light laser canon is waiting for fools. With an MK 2 monode computer, as well as better armor and defenses, it certainly makes for a significantly more impressive vessel, as befitting of an ace pilot!

On the other side of things, you know how it can be. You’re stranded in some sucky desert cantina, with barely a credit to your name, and you know you need to get around? Well, sometimes beggars can‘t be choosers and for these instances, we get tier ¼ ships with a paltry 25 BP – the degenerate gun-fighter and the degenerate laser-fighter. The former comes with a flak thrower, the latter with a gyrolaser and a light laser at the aft. Big plus!

Anyhow, there is more to these: You see, in contrast to other pdfs, the respective ships do come with notes on famous units: For the tier ¼ vessel, we for example learn about how…certain…ahem… temperaments of pilots favor it; we learn about ace pilots and how Errad’s Roughriders favor the armored vessels – these little bits of flavor enhance immersion.

Now, here is the reason this pdf is so much larger than the previous ones – we get fully filled-in ship-sheets for ALL of these variants – you just need to print them out, and bam, you’re set to go. That is pure awesome, particularly considering how aesthetically-pleasing these sheets are.

There is one more aspect in this pdf that put a HUGE smile on my face, that sent my mind to the stars. It’s about 2/3 of a page long, and it has the rather unremarkable header “procedures.” It adds more to the sense of reality, to being plausible, than I imagined, and it made me very aware of how much I missed that type of information from Starfinder’s Core book. First of all, the external visual inspection section can provide some cool roleplaying cues and even adventure hooks for players and GMs alike.

Even cooler, and put a big smile on my face, though, were the detailed “Prepare for takeoff” instructions – they really let you visualize how it is to pilot them. It adds actual soul and detail to getting into your fighter, it makes the whole thing…more real, less of an abstraction. This may well have spoiled me for any scifi-RPG; it’ll now be something I’ll be looking for everywhere – and yes, “Takeoff Procedure” also is explained. You don’t see how amazing that can be? Okay, perhaps this is the otaku in me talking, but I still get goosebumps when my favorite heroes get in their fighters, are sent towards launch pads, hit the ignition switch and announce over intercom their names and that of their fighters, how they’re ready for takeoff. Perhaps it’s just me being a huge Gundam fanboy, but this section…oh boy, did it made me smile! It’s a small thing, but to me, it vastly enhances the pdf.

Editing and formatting are top-notch on a formal and rules-language level, I noticed no issues. Layout adheres to a nice two-column full-color standard, and, as before, the artwork presented for the fighter is amazing. The pdf has no bookmarks, but needs none at this length. While we do not get a map of the one-pilot interceptors, this is offset by the sheer amount of content we get.

Paul Fields and Jim Milligan deliver a pdf here that is insane. The amazing artwork alone is worth the asking price, of, get ready…a paltry BUCK. Yep. $0.99. You can’t buy ANYTHING even halfway significant for that nowadays (not sure how much a snicker bars is today in the US), but I know that you can’t even get a cup of joe for a buck! The artwork alone is worth the asking price; and then, you not only get a whole bunch of ships, ready for insertion into your game, you also get them already filled into ship-sheets…AND you get flavor galore! For a buck! This is one of the pdfs that really made me scratch my head regarding how it can…well, exist– honest passion is the only explanation feasible.

It really is. The evolution of the already impressive base of the series in this way further shows a willingness to listen to fans…oh, and that humble procedure section? It’s not something you’ll whip out all the time, obviously. But it adds an immense amount of soul, of plausibility, to the proceedings, and it helps reduce the disjoint between playmodes – it makes piloting feel less like “We hit the space combat mini-game”, and more like “I go into *MY* fighter. I start the sequence. *I* go out.” – this humble bit of fluff makes entering space combat feel like it’s a continuation of the game, not a hard-cut-abstraction, as modes shift.

Beyond roleplaying potential (My lucky safety harness…pictures of holiday planet xyz, etc.), this is so obvious now that I see it, it’s puzzling that I never realized how much I missed it before.

This is one little stroke of genius indeed, and I sincerely hope that SFRPG publishers take heed- this is how it’s done regarding ships. I am genuinely and thoroughly impressed by this offering, and if you even remotely have use for a couple of space pirate fighters (seriously, who hasn’t?), then get this ASAP. If you purchase this and end up genuinely thinking that this wasn’t worth the single buck of its asking price, then contact me. I’ll refund you. And no, I’m not affiliated with Evil Robot Games in any shape, way or form. I just believe this much in this humble, amazing little pdf. Final verdict? 5 stars + seal of approval. If these guys ever kickstart a big book of ships, get on board. Seriously – if this is the shape of things to come from the company, then consider me a fan!

You can get this pdf for, let me once more point that out, a single, paltry buck, right here on OBS!