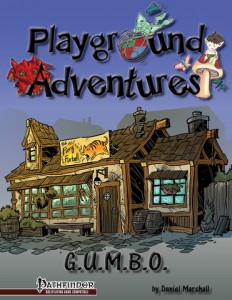 This module intended for younger audiences clocks in at 34 pages, 1 page front cover, 1 page editorial/ToC, 1 page SRD, 1 page advertisement, 1 page back cover, leaving us with 29 pages of content, so let’s take a look!

Before we dive into the nit and grit – this module does sport 3 pages of pregens with nice artworks for each, though, due to space-constraints, the attribute-modifiers, associated attributes for skills etc. are not listed – particularly for the target demographic of kids, these short-hand basic pregens may actually be more confusing when learning the game – so yeah, not a fan of this brief depiction…but that may just be me and the taste of my own gaming group.

This is a review of a module and as such, the following contains SPOILERS. Potential players should jump to the conclusion.

All right, still here? The small city of Hearthridge (fully statted), a pretty and calm little place, has its fair share of illustrious folk – one of which would be Gerard Scribbleboom, who may be partially responsible for a less than kind local attitude towards gnomes. And, with a name like that, the reason should come as no surprise – this alchemist has indeed once managed to burn down the merchant’s quarter – and now, he’s back at it, trying to create G.U.M.B.O. – Gerard’s Ultimate Miraculous Benevolent Odiferous Brew, to get back into business after his little blaze has earned him a less than stellar reputation. On a positive side, the already ingrained and recently flared racial intolerance towards gnomes could, at least potentially, benefit from this venture – thus, hearty adventurers take to the by now infamous “Fiery Furball.”

There, the alchemist hands the PCs an ingredient list (replicated as a neat hand-out) – there are 4 necessary ingredients: Blue shrooms, leopard’s bane plants, Muriod Oil and abolone shells. As for the optional ingredients – Burdock root, powdered rose quartz, Calendula and vampire dust need to be collected for his masterpiece to be complete, though the optional components remain sidenotes and not detailed fully in the module – and off the players go, with general ideas on where to get the items being provided.

The blue shrooms can be found in damp caverns and thus, the first task is thankfully relatively simple – a kobold cavern with relatively easy to defeat adversaries, which coincidentally contains some delightfully diverse effects…oh, and here is as good as any other place a good note for one particularly cool feature herein: The module provides bonus XP when the PCs manage collecting the mushrooms sans killing kobolds…you know, act like proper heroes. Two thumbs up for that!

But hey, the grassland will be easy, right? Right? Sorry, no – the fields contain a significant array of giant vermin – beyond giant ticks, the PCs will have a chance to save a farmer’s boy from a colony of fire beetles and their queen. The muroid oil can be found in yet another little dungeon – the lavishly mapped labyrinthine sewers of the city, where a clan of ratfolk lair…and yes, once again, not being a nasty murder-hobo is rewarded, while PCs doing their legwork can find a nice, player-friendly schematic of the sewers.

The abalone shells, though, may end up busy-work – thankfully, smart adventurers know when to delegate – and if they help the local kids build the ultimate sand-castle, they may count on the assistance of the kids to find sufficient quantities of abalone shells…but not all’s well here: Considering the explosive past of a certain gnome, some thugs seek to beat up the PCs and stop them from “blowing up more parts of the town” – while intimidation would be a smart choice here, oddly, this time around, there is no reward for non-lethal combat resolution.

Returning with all key-ingredients to Gerard, the PCs arrive just in time to prevent an angry mob from burning down Gerard’s shop and throwing him in jail – putting out the fires the crowd caused and calming them constitutes the finale of the module – which is kind of anticlimactic – no complex series of arguments, no direct correlation between actions and consequences here – a missed chance…though the potency of the G.U.M.B.O. increases with the number of ingredients gained…some of which may provide permanent attribute bonuses! A caveat that prevents stacking thereof would probably have been in order here. As a minor glitch, the table of G.U.M.B.O.-effects erroneously notes “Parts of Sandcastle Constructed” in one column.

Editing and formatting are very good, though not quite as tight as in the other Playground Adventures-modules I’ve read so far. Layout adheres to a beautiful two-column full-color standard and the pdf comes fully bookmarked for your convenience. Artworks are copious and original, neat full-color pieces – this book *is* beautiful. The cartography of the GM-maps is very playful; conversely, the schematic player-map is a bit drab in comparison and not all of the encounter-relevant locales sport maps – particularly annoying for the fiery furball in the finale.

G.U. M.B.O. was the third module by Playground Adventures I ran for my group and author Daniel Marshall has crafted a nice one; there is a lot of playfulness going on and the module does not sport any inappropriate themes. Billed as suitable for children of ages 10 and up, personally, I’d situate this at a lower age range, perhaps 6-7 and up; the module does reward non-violent conflict-resolution (though it is a tad bit inconsequent with it) and sports generally an array of didactically valuable themes beyond that: The prejudice towards gnomes in an otherwise good city is an interesting angle and blends well with generating an awareness of the consequences of one’s actions – alas, the module does miss the chance for the PCs to truly do something about the prejudice, to champion integration. While better than a “G.U.M.B.O.-makes everything all right” cop-out, I think a more tighter focus on this theme would not only have been morally justified, it would also have made for a fun, uncommon adventuring experience.

So this would be the first thing I’m not sold on here; the second component, beyond the rules-issue presented by the finished G.U.M.B.O., would be the thoroughly disappointing anti-climax of an ending scene. So, some CR 1 dudes with NPC-levels that don’t even want to fight (no troop-rules, btw.) and a minor hazard…that’s it. Similarly, potential for complex roleplaying and skill-challenges, like e.g. with the sand castle-building, could have been expanded upon – where are the mechanical ramifications of making a sandcastle, why not make this a collective challenge with more than one skill check? General groundwork via Knowledge (engineering), fine ramparts and the like via Sleight of Hand? Why not make it magical, shrink everyone nearby and fight the thugs inside, granting bonuses depending on its size? For playtest purposes, I ran this as written and my players were pretty let down by the finale, commenting that it didn’t feel right, particularly since we ran this after the superb “Pixies on Parade”, which sports a truly stunning finale.

Speaking of which – the themes in “Pixies on Parade”, while clad in child-friendly tones, are actually a tad bit darker…but their execution is more concise, the reward-ratio for actions and the impact of player-choice is more pronounced. This may be unfair and harsh, but one of my “older” players from the kid-group summed it up with one sentence: “This was a fun fetch-quest…but a fetch-quest nonetheless.” I am inclined to agree, though I wouldn’t emphasize that as a negative factor. Fact is, MANY excellent modules are, structure-wise, fetch-quests – that’s not bad. The problem here is that the disappointing finale makes the module’s rewards, its finale, feel so anti-climactic it makes the other encounters matter less, feel less relevant, If this seems overly negative, then rest assured that’s not my intention; compared with the previous offerings by Playground Adventures, though, this one lacks the whimsical magic that made them feel like fairy tales, while also not bearing the full brunt of its more “realistic” themes to bear – neither thematically, nor didactically. In the end, G.U.M.B.O. remains a nice module, though one that does not reach the levels of awesomeness established by the other two modules released by Playground Adventures so far. My final verdict, in complete accordance with the kids for whom I mastered this (just fyi, 6 kids, ages 5 – 11 this time around), will clock in at 3.5 stars, rounded up to 4 due to in dubio pro reo.