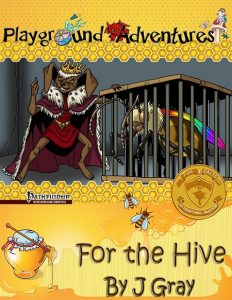 Well, before we dive into the nit and grit – this is not simply a regular module; it also is a means to convey information and teach facts to the players without making it feel like just jamming information down their throats. And every gamer can attest to the power of gaming regarding the acquisition of information – whether it’s sheer vocabulary or other components, RPGs are “brainy” hobby that teaches without feeling like teaching. It is thus pretty much a given that the combination of teaching and gaming makes sense. Playground Adventures’s modules tend to be aimed at a younger audience, with this one targeting kids from ages 4+ – a valid projection in my book; smaller kids may need a bit more handholding; youths that start hitting puberty may require slightly more edginess (the module has scenes that can work that way), but as a whole, this module works for ages 4 up rather well; at least it did in my playtest.

It should also be mentioned that this module takes place in the fairy tale village of Glavost, first featured in Pixies on Parade and then expanded with its own little supplement, so if you’re looking for a bit of internal consistency, there you have it -and yes, there is a nod to “A Friend in Need” as well.

All right, so this being an adventure-review, the following contains SPOILERS. potential players should jump to the conclusion.

Most of us know how crucial bees are for plants and ultimately, even us as a species. In a magical world, it is only fair to assume that magical bees similarly exist. Owen, apprentice to the wizard/librarian of Glavost (and pen-pal of the gifted origami-magic savant Azumi from “A Friend in Need“) is contacted by the bee sprite Bzzercup…and since adults curiously seem to be incapable of perceiving the fantastical suffusing Glavost, it falls to the PCs to help the bee sprite. You see, Owen botched big time. He began making paper wasps per Azumi’s instructions and they failed to animate…however, they did have enough lingering magic and thus, were stolen by a particularly nasty gremlin named Chuft.

Animating the paper constructs, he has taken control over a magical bee hive by capturing the queen and forcing the bees to do his bidding. The only chance to save the hive sans wrecking it, is to find the “Be the Bug”-elixir left by the former apprentice…but, alas, the bottles are unlabeled. Thankfully, though, a letter provides clues and a nice puzzle for the kids to figure out: Basically, the former apprentice, Owen’s sister, has provided a classic exclusion/deduction logic puzzle for the kids to solve, with the proper guideline for the GM as well…and yes, you can simply skill check brute force it, but at least all tables I play with prefer beating the puzzle. Even cooler than just brute-forcing is that the pdf does have a replacement puzzle that is easier, based on bottle shapes.

Drinking the elixir shrinks the PCs immediately down to the size of bees, an, whether with or without origami swords, the PCs get the sealed mission briefing. Throughout the module, Bzzercup “accompanies” the PCs as a GM proxy that can be used to convey a LOT of information pertaining bees and their impact on the world. This works via buzz lines, basically a kind of magical headset. Now usually, shrinking does entail a number of complex rules operations – for a summary of these for groups that wish for a more rules-conform switch (or more modular size-increase/decrease operations), I’ll heartily recommend the superb Microsized Adventures by Everyman Gaming. For the purpose of this module, no complex changes are required, since the combats take place within the size frame of the shrunken PCs: While crossing the backyard in the shrunken state (a wilderness crawl most unusual), the PCs will, for example, deal with a praying mantis that seems rather gigantic for them -a great way to talk about predators of honey bees, for example.

After the PCs have made their way past the backyard, they will have to infiltrate the hive itself, where the paper wasps make for their primary antagonists – and, rather importantly, they will have a means to engage in constructive tasks: Feeding the larvae, for example. The unique terrain is similarly utilized well – spending too much time in the pollen cells isn’t healthy, for example. In the end, the PCs will have to defeat Chuft after climbing through the hive and free the queen.

Now, this module being educational, the pdf has a list of further reading, should you wish to increase this component. Beyond that, a CR 3 variant of paper wasps as a swarm, suitable for Medium adventurers. beyond that, instructions to make paper wasps (in 3 difficulty-levels!) are provided via links, allowing you to create paper models to use in conjunction with the module. Beyond that, the maps of backyard and the hive are provided in both GM and player-friendly versions…oh, and the pdf does draw attention to the threats our own honey bees face in these days -with CCD causing ever more colonies to collapse, we should indeed take care of the bees.

Conclusion:
Editing and formatting are top-notch, I noticed no significant glitches. Layout adheres to a gorgeous, custom 2-column full-color standard with bee-themed borders. Combined with the full-color artwork, this does make the module a beautiful one. The pdf comes fully bookmarked for your convenience, and as mentioned before, the cartography is excellent.

J Gray’s “For the Hive” is a truly unique module – I have never read a module like it; It’s creative, interesting, provides a blending of wilderness and dungeon, is educational, offers multiple solutions for challenges and a blending of different things to do; There is combat, there is room for being smart; there is room for being kind…and all the while, the pdf conveys useful information in a manner, teaches while playing. Even adults may have a blast with this one; granted, most will know a lot of the bee-related facts, but the module that remains beyond the educational component can very well stand on its own.

As a whole, this module can be considered an excellent addition to one’s table and, from just reading it and analyzing it on paper, I would have went with a final verdict of 5 stars. However, the playtests of this one pretty much have been met with total acclaim and excitement by the kid-group, who loved the sense of consistency and truly enjoyed it, made me reconsider. Even those of my players who usually fall on the somewhat darker spectrum regarding their tastes enjoyed this, in spite of its lightheartedness. Hence, this does get my seal of approval as well.

You can get this cool, educational module here on OBS!