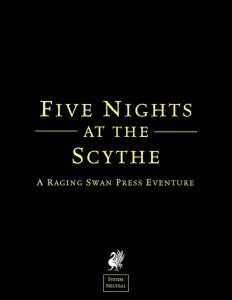 As usual for eventures, the focus in this supplement is not combat or regular dungeon exploration, but instead a more social setting; after all, not all adventuring needs to be done with blades a-gleaming and spells a-burning, right? It’s an event-adventure—an eventure. Anyhow, as such, this eventure is best-suited for the low- and mid-level regions, and is nominally situated within the Duchy of Ashlar, the region in which most current Raging Swan Press supplements are situated.

Now, it should be noted that the tavern holds a secret, which, unlike the things encountered in most eventures, may well spark conflict; the NPCs referenced throughout, including this section, note alignment, gender, species and class + suggested class levels, but this being the system-neutral version, do not provide actual stats. The classes referenced are the proper old-school terms – you know, “thief” instead of rogue, etc. Mentioning that since some of my readers do care about that.

In this version, I can’t well complain about a lack of mechanics, either.

Editing and formatting are very good, I noticed no serious formal hiccups or rules-language issues. Layout adheres to Raging Swan Press’ elegant two-column b/w-standard, and the pdf comes in two versions, one designed for the printer, and one made for screen-use. The pdf is fully bookmarked for your convenience. The map is mostly, but not entirely, player-friendly.

Creighton Broadhurst has a well-deserved reputation for excellence in his writing, and this supplement is a great reminder for that, as far as the fluff goes. The system neutral version leaves few things to be desired; it would have been nice if the supplement had actually specified how the secret works (in words, not numbers), but that may be me. In many ways, it is evident that this is the primary version of the supplement, from which the respective systems were partially extrapolated; this supplement is refined, interesting and full of flavor for a fair price. Now, I do wish the 5e and PFRPG versions had more care put into them, but that should not tarnish my review of this supplement. With only minor nitpicks, such as the minor map issue regarding the indicator, this supplement receives 5 stars, but misses my seal of approval by a margin.

If you enjoy my reviews, you perchance might consider leaving a tip via paypal, or joining my patreon.