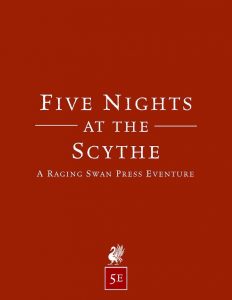 Now, it should be noted that the tavern holds a secret, which, unlike the things encountered in most eventures, may well spark conflict; the NPCs referenced throughout, including this section, note in 5e default-NPC statblocks to reference, so regarding combat functionality, you’ll be better off than in PFRPG.

Now, the actual eventure follows a similar formula as the inaugural installment of the series, in that you use the first night the first time the PCs visit, the second night the second time they visit, etc.; for that first visit, there are 4 solid hooks provided, and we do get not one, but two lists with 6 minor events and 6 whispers and rumors each (so 12 per category) to add additional local color to the tavern. As in PFRPG, we don’t get any DCs to learn those.

The absence of hard rules in the 5e version is less problematic than in PFRPG, courtesy of the default NPC stats providing a framework, but it’d have been nice to see barroom brawl rules – either as a mini-game, or by referencing Kobold Press’ take on that concept as a creature – it’s on the SRD, after all. Or, you know, use the RSP supplement.

Creighton Broadhurst has a well-deserved reputation for excellence in his writing, and this supplement is a great reminder for that, as far as the fluff goes. When it comes to actual rules, this supplement is even more sparse than most Raging Swan Press offerings; but in 5e, this still works; not as smooth as it should (the aforementioned secret should be supported by some DCs…), but as a whole, this is much more ready for actual play than the PFRPG-iteration.

Now, personally, I think this works better than “Night of the Masks”, but it also is *almost* the system neutral version and doesn’t add system-relevant aspects that should be there. As such, my final verdict can’t exceed 4.5 stars, and I frankly can’t bring myself to round up.

If you consider my reviews to be useful, please consider leaving a donation via paypal, or joining my patreon.