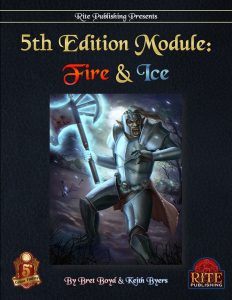 This revised edition of this module for 5e clocks in at 20 pages, 1 page front cover, 1 page editorial, 1 page SRD, 1 page of advertisement, 1 page back cover, leaving us with 15 pages of content, so let’s take a look, shall we?

In the original iteration, this was represented with a variety of unique rules-operations and they have been translated here -and it is here that the revised edition does the RITE thing: Where before, we had serious issues, now the revision sports lavish, detailed NPCs with unique abilities and tactical options, with the statblock-formatting and general integrity improved by more than just a bit. Kudos for going the extra mile here!

Upon temporarily defeating the threat, the poor survivor comes clean and asks the PCs for aid and so they’re off to the island of pleasure, Mibre – including a gorgeous map, mind you. This place is a small paradise, where an order of enigmatic monks poses an interesting puzzle (including trouble-shooting advice and means t brute-force it) – here, the conversion is working as intended. The strange order of monks living here will prove to be pretty important, for without their help, the PCs will have a hard time bringing the magical crystal to the plane of fire to sunder it and thwart the plans of the evil cabal. Only by understanding the monks and participating in their tests (sans being killed by the cabal’s forces!) do they have a solid chance to destroy the crystal in the plane of fire. The whole structure of the module and its use of 5e-mechanics has improved dramatically.

Editing and formatting have improved significantly on a formal level, but more importantly, are now up to the task on a rules-level as well! Layout adheres to Rite Publishing’s two-column full-color standard and the pdf comes fully bookmarked with nested bookmarks. The artworks featured are solid full-color and the cartography by Tommi Salama is nice, though the absence of the *existing* high-res map-versions feels odd; indeed, since they act as handouts/ready to go, the rather small depictions of the maps in this iteration of the module is odd – in the Mibre map, you can barely make out the places!

The original 5e of Bret Boyd & Keith Byers’ “Fire and Ice” was a horrid mess…and Rite Publishing did the RITE thing here and got the 5e-specialist of the Four Horsemen, Dan Dillon, on board – and Dan delivers. In spades. He has basically taken a bad conversion and improved it to the point where the book now really works, where it is a fun, challenging high-concept 5e-module…just goes to show what a good dev can do. Anyways, the revised edition, superior in every way to the original, receives an updated rating of 4.5 stars, though I do still have to round down; this should not, however, keep you from checking this out – now 5e players may quake and shake before the Terminator-level assassin as well!