Files for Everybody: Acrobatic Feats (PF2) 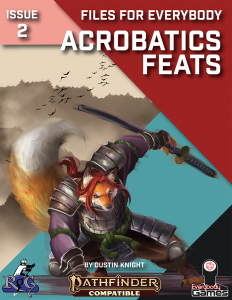 Okay, on the introductory page we actually get content, namely a new background…the surfer. This one nets you an ability boost for Strength or Dexterity, and a free one, and makes you trained in Acrobatics and Ocean Lore. Additionally, you get the Surf feat, which brings us to the new feats herein, which all, to some degree, require, no surprise there, at least being trained in Acrobatics.

Surf takes an action, and lets you surf horizontally over the surface of a liquid, using the Athletics check DC to swim through it, and you thus ignore terrain features that would usually impede you, but wouldn’t impede your board. Helpful: Even though snow is technically not a liquid, the rules-text does mention it as a valid surface, and the rules also mentions the requirement for force acting upon you, such as gravity, the push of a wave, etc., and if said force would push you farther, you must keep surfing each round or fall, with a proper differentiation between critical successes, failures, etc. being provided.

Quick Grab is one of the feats that may not sound like much, but that is super useful and will see tons of use: Stride up to your speed and Interact to pick up an item if it was within reach during your movement. The feat accounts for alternate movement modes, and your proficiency in Acrobatics determines the maximum Bulk of the item you pick up. Cool! Okay, so these are the level 1 feats.

For level 2, we have 3, all of which require expert proficiency in Acrobatics: Blinding Squall requires a fly speed and flying at ground level and lets you kick up dust in a short-range burst to generate a concealing cloud that briefly lasts; this is obviously contingent on material to kick up. And nope, it doesn’t actually, you know, blind targets. Confounding Tumbler adds critical success and success effects to Tumble Through, allowing you to render the enemy flat-footed against your next attack, or attacks until the end of your turn. Skillful Contortion makes the enemy trying to Grapple you instead target your Acrobatics DC, and if you’re a master or legendary, you get some benefits if an enemy critically fails to Grapple you.

At level 3, we have Trap Dancer, a one-action feat with the secret and move tags, and which requires that you’re aware of a hazard. With it, you can make an Acrobatics check to move past hazards sans minimum proficiency to disable, and with a critical success, you can even trigger them in a way that prevents them from affecting your allies. If your proficiency in Acrobatics is higher, you can manage to use this feat with traps that require a higher minimum proficiency rank to disable. This one is gold for NPCs escaping, and for characters that enjoy planning/setting up ambushes.

At level 4, we have Perfect Balance, which builds on Steady Balance and requires a rank of master, and makes Shove and Trip attempts against you target Acrobatics DC instead of Fortitude. It also lets you Grab an Edge if your hands are tied or restrained. Level 5’s Cat Pounce builds on Cat Fall, uses your reaction, and lets you weaponize your falling when landing on enemies. The feat scales and, being situational, even a critical success will see an enemy take minor damage. The interaction with Cat’s Fall is also smooth.

At level 12, we have another reaction-based feat, namely Pin the Blade, which lets you retaliate against a missed weapon attack from an adjacent enemy (“Adjacent” is important – the feat works against ranged weapons as well this way, but only if they’re used in close quarters; clever and makes sense!): You make an Acrobatics check vs. the target’s Reflex DC, jumping on the weapon to reduce its effectiveness. The success/failure effects represent rather well what you’d expect here. Neat.

Finally, there would be Step In, another reaction-based one, which requires legendary proficiency in Acrobatics and which may be taken at 15th level; it’s triggered by an enemy of your size or larger using an action with the attack, manipulate or move traits, and makes you use Acrobatics vs. Reflex DC, and can immobilize the opponent and render them flat-footed AND unable to use actions with the concentrate trait. The effect ends, obviously, when you move or are forcibly moved.

Editing and formatting are excellent on a rules-language level; on a formal level, the pdf is very good as well, though I did notice a few minor things, like “Expert” in the prerequisite-line being title case, when it usually is lower case, but that is cosmetic. Layout adheres to an elegant 2-column full-color standard, and the pdf sports a really nice original full-color artwork. The pdf has no bookmarks, but needs none.

Dustin Knight’s Acrobatics Feats were a pleasant surprise to me. Cat’s Pounce is a bit situational as far as I’m concerned, but as a whole, the feats include several definite winners, not a single sucky one, and with Quick Grab we have a feat that should have been core. That gem alone warrants imho getting the pdf. The feats that emphasize the slippery scoundrel angle also help a lot here. As a whole, this is a great example of an unpretentious and extremely useful little pdf. 5 stars.

You can directly support Everybody Games here on patreon.

If you enjoy my reviews, I’d appreciate a tip, or support of my patreon here. Thank you.