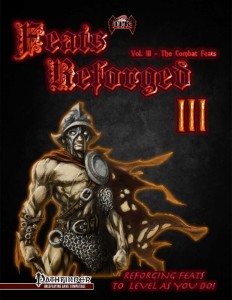 The third installment of TPK Games’ reimagination of feats as scaling with the levels clock in at 68 pages, 1 page front cover, 1 page editorial, 1 page SRD, leaving us with a massive 65 (!!!) pages of content..but what do these pages cover?

Well, essentially this book covers the feats from Ultimate Combat and introduces scaling mechanisms into them. Now the pdf does mention the topic of balance – and whether this changes the balance of the game. The basic stance taken by the pdf is “no”, as long as you apply the scaling mechanisms to adversaries as well. personally, I am not sold on that, seeing how classes with many feats necessarily receive more benefits from the scaling of feats. That being said, I do consider the impact/power-increase to be relatively conservative, so no rating penalty for that. Another thing – this review is NOT, I repeat, it is NOT about whether the feats from ultimate Combat are well-designed…or balanced for that matter. This review is about TPK Games’ take on the feats, on their scaling mechanism and on whether or not they live up in creative/concise ways to the premise of the pdf. So no, my admitted loathing for some Ultimate Combat feats and their at times problematic rules-language will not reflect negatively on this pdf. If it manages to fix an issue from the source material, though, I’ll happily point that out.

The scaling paradigm for the feats usually assumes a scaling on 7th and 14th level, 12th and 19th level, or 13th and 20th level, with powerful, high-prereq-feats sometimes coming with less scaling. Now the first feat herein already is an interesting example for why this pdf *does* have something significant to offer – the upgrades of Adder Strike allow for the application of two doses poison to three body parts and later, even to apply two doses to any number of eligible body parts. This scaling goes beyond boring numerical escalation, adding a surprising tactical diversity to the scaling, one rarely seen in the Feats Reforged series so far – so consider me intrigued. And yes, this extends to quite a few other feats – Arc Slinger’s second augmentation, for example, allows the benefit of Point Blank Shot to be applied at 150% of its usual range when used in conjunction with slings/sling-staves.

What about e.g. Betrayer, adding a penalty to attacks on the round following your betrayal? Impressively, the feats themselves often provide whole new tactical options I quite frankly did not expect to be present – take blinding throw’s second upgrade, which lets you count as +1 size category when using the feat. If you’re like me and just love TPK Games’ Laying Waste-book on critical hits, you’ll also enjoy e.g. Boar Style’s option to cause bleed damage and the advice on handling the use of Laying Waste in conjunction with this superb critical hit system. It should be noted that e.g. the massive damage rule and similar optional rules are taken into account as well whenever they are relevant – impressive to see this pdf go above and beyond.

High-level siege commanders may, for example, assemble siege engines much, much faster, whereas efreeti style’s cone-blast can be expanded to full 30 ft., whereas sap masters of higher levels may treat rolled 1s as 2s and later even 1s and 2s as 3s when dealing nonlethal sneak attack damage to adversaries. Increased base damage dice for blowgun darts can also help retaining the usefulness of certain builds.

Indeed, while some components of the rules language has very minor hiccups, the significant majority of the feats herein go quite an impressive step beyond what I consider the numerical escalation school of game design, either providing much-required additional options for less than optimal feats or simply, brand new options, which in diversity, if not in power (thankfully!) reach the added level of tactical depth of mythic feats in their more shining iterations.

Editing and formatting, while not perfect, is a significant step up from the blunders that have haunted the classes-reforged series – these components can be considered more than satisfactory in their execution. Layout adheres to a parchment-like two-column standard that is easy to read and the pdf comes with bookmarks by alphabet and the good type of unobtrusive hyperlinks. While I would have liked each feat as a bookmark for more convenience when using the electronic version, I won’t penalize this pdf for it. The artworks in full color are sparse, but we don’t get these books for the artwork now, do we? Content over bling any day for me!

I’ll be honest with you -I wasn’t looking forward to reviewing this pdf, mainly because Feats Reforged-pdfs tend to be an insane amount of work that is also not particularly rewarding from a reviewer’s perspective. Or so I thought. The first two installments of the series did what they said on the lid – they took the core-feats and APG-feats and made them scale. Mostly sans issues, so yeah, great files, case closed. I expected this book to be pretty much the same deal. It’s not. In the capable hands of lead designer Chris Bayes and Brian Berg, this pdf went beyond what I would have expected from it, delivering quite frankly more interesting options than a book with this scope almost has a right to. Certain crunch-projects look downright like WORK to me. Not the “inspiring” type of design, but, capital letters “work” – Legendary Games’ mythic feats and spells fall into this category and so did the feats reforged-books. These are assignments I personally would not be too keen on. They are immensely useful, but for my part, the designers of books like that have earned their compensation – design like this can be rewarding, but it also takes a lot of dedication.

It is of utmost importance, then, to acknowledge books that are just like this and still manage to retain a sense of wonder, of versatility. Books that don’t fall into the trap of just devising one set of numerical escalation design-rules and then stick to it, but instead go the long, high road. Not the road of least resistance or the fastest, but the one with the best results. I consider this installment of feats reforged to be just that. It is astonishing, baffling even, that such an assignment has produced such an interesting book. When I reviewed Vol. 2 of the series, I wrote that I’d be skeptical regarding how TPK Games would deal with the problem feats herein, how the line would go on. If this is the new face of Feats Reforged, then consider me excited. Even though Ultimate Combat contains some of my most loathed feats for PFRPG, even though I consider the base material far from perfect, the sheer passion and versatility of the design, especially within such a tight frame, is impressive.

While I still won’t like quite a few of the feats in UC, the matter of the fact is that I am much more inclined towards just about ALL of their scaling versions. In quite a few instances, coal has been turned not to rough diamonds, but at least into something that sparkles, that has a shine. If this accumulation of praise was not enough indication – I am perfectly willing to consider the scant few issues herein, all of which fall into the “minor” category or are based on issues with the base feats, simply less than relevant when compared to the surprising wellspring of ideas found herein, of all places. Add to that the relatively concise balance and we have an obvious final verdict: 5 stars + seal of approval. If waiting this long for a new reforged-book results in this level of awesomeness, I’ll gladly wait for the next book!

You can get this rather impressive installment of the feats reforged-series here on OBS and here on d20pfsrd.com’s shop!