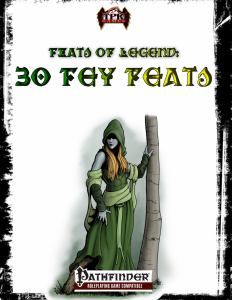 This installment of the Feats of Legend-series clocks in at 10 pages, 1 page front cover, 1 page editorial, 1 page SRD, 1 page advertisement, leaving us with 6 pages of content, so let’s take a look at these feats!

It should be noted that many of these feats can be taken via Eldritch Heritage and fey bloodline as an alternate qualification means.

After a massive table summing up feats and prerequisites in alphabetical order, we dive right in, so, in bullet-points, here’s what the feats do:

-Arrow Charm: Use Cha-mod instead of Dex-mod on ranged attack with bows and crossbows. Personally, I hate attribute substitution feats like this. They never made sense for me.

-Blood-Soaked Cap: 3/day as a standard action, soak a woolen cap in blood of a foe you brought below 0 hit points. If you do, you gain +2 to damage and fast healing 1 for one minute. You lose these bonuses if the cap is stolen. So, do you have to wear the cap? RAW you don’t. Also, can someone hand me a kitten, please? (And yes, since that use may be intended for once, I won’t take this into account re the final verdict.)

-Capricious Luck: As an immediate action, add +1d4-2 as a luck bonus to AC. Yes, this may yield a penalty. Interesting!

-Changelingraised: +2 to Disguise and Stealth, +4 if you have 10 ranks or more. Boring.

-Dreaming Jaunt: 1/day as an immediate action, move 1d10 x 10 feet in one direction. If you’d end up in a solid object, you instead show up in the nearest suitable square. Take the feat additional times for more daily uses. Using the feat does not provoke AoOs, but it probably should be codified as a conjuration [teleportation] effect.

-Faerie Godfather: 1/day summon faerie godfather as per planar binding – the fey may have a maximum of 12 HD. Cool one, balanced by minimum level.

-Faun’s Fancy Tune: 3/day, as a swift action, use masterwork panpipes to increase the DC of the next bardic performance by +2. I assume this only works with wind instruments.

-Feyborn: Treats you as both normal type and fey, two types at once does not work RAW. +1 to Ref and Will-saves and 1/day dancing lights – which should specify it works as an SP.

-First-World Blood: +1 to the DCs of illusions, +2 to Will-saves to resist illusions. If gnome, add +3/day uses of SPs instead.

-Gift of the Tooth Fairy: Bite attack at +1 size, add full Str-mod to it.

-Gremlin’s Luck: Has 4 variants: 2/day immediate action d20 reroll, take the lower roll; 2/day make an item within 60 feet have a 20% failure chance for 1 minute; 2/day decrease complexity of devices sabotaged with Disable Device one step for the purpose of duration; finally, +4 to CMB to trip attempts.

-Jack’s Grin: +2 to Intimidate checks to demoralize and when a target is shaken for 4+ rounds, you may instead frighten the target for 1 round.

-Knowledge of the Old Ways: +2 to Diplomacy with fey and their starting attitude is one step better. 10+ ranks in Diplomacy increase that to +4 instead and reduces the DC of requests made by a further 2.

-Mercurial Mind: Add Cha-mod to Will-saves versus enchantments and mind-affecting effects. Not a big fan of dual attributes to anything.

-Polluted Blood: +4 to Fort-saves to resist poison and diseases.

-Seelie Presence: Targets of your enchantment spells must make 2 successful saves to avoid their effects. OMG. OP and broken as hell. Also needs clarification: When getting saves to negate spells in effect, do the targets have to save twice as well?

-Speak with Nature: Suffer two points Charisma damage to gain the effects of commune with nature, limited to 100 feet per HD. I assume that’s an SP.

-Strength of the Oaken Lords: As a swift action, gain +2 Strength and +1 natural AC, but also vulnerability to fire. Can be used Cha-mod times per day and lasts for 1 minute. Nitpick: Doesn’t have the minimum 1 use caveat.

-Strong-Willed Charmer: +1 to the DC of charm spells, +2 to the Will-saves to resist charms and compulsions.

-Supernatural Metabolism: When receiving healing from ex, alchemical, extraordinary or supernatural sources, you may treat it as magical for Fey Foundling or Fast Healer.

-Unseelie Power: +1 to the DC and spell-level of spells versus non-chaotic targets.

-Unseelie Side: +2 to Intimidate and to the DC to intimidate you. Bonuses increase to +4 regarding fey. If you have 10 ranks in Intimidate, you increase that to +4 and +8, respectively.

Editing and formatting are good – while a few feats could be a tad more precise and while there are a few hiccups in here, as a whole, this is rather solid. Layout adheres to a 2-column full-color standard with nice b/w-artworks. The pdf comes with full, nested bookmarks for each feat: Kudos for going the extra mile there!

Brian Berg, Neal Litherland and Simon Muñoz deliver a generally solid book of feats. There are quite a few filler feats in here, yes, and some are not really that interesting, but there are also some gems in this pdf that help even out the overall offering. While not impressive per se, it also does not deserve being called bad – hence, my final verdict will clock in at 2.5 stars, rounded up due to in dubio pro reo.

You can get these feats here on OBS!
Endzeitgeist out.