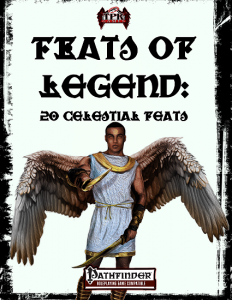 This installment of the Feats of Legend-series clocks in at 9 pages, 1 page front cover, 1 page editorial, 1 page SRD, leaving us with 6 pages of content, so let’s take a look!

The pdf begins with a handy table that sums prerequisites and feats for your convenience and then goes on to present the individual feats, so let’s take a look!

-Angelic Reputation: An achievement feat, needs to have caused fear in evil outsiders; increases DC of fear spells and effect by +2 versus evil outsiders; also nets a massive +5 bonus to intimidate said foes. On the nitpicky side: “In addition, the duration of the shaken condition is increased by 1 round.” is slightly less precise than I’d like it to be – it’s obvious, this refers to demoralize, but RAW it extends to all shaken condition-causing effects.

-August general of Heaven: This story feat allows you to, as a swift action pronounce a challenge versus an evil outsider, gaining +1 to atk and AC. If the foe or you are attacked during this challenge, you take a -2 penalty to AC and atk for 1 round. This ability can be used at-ill, but only once in 24 hours versus a given foe. As an interesting goal, this feat requires you to defeat good outsiders in nonlethal challenges – which is pretty cool, though an actual number of HD and encounters you need to beat would have been nice. “an appropriate number” does not really help here. Upon making the goal, you get a celestial cohort with leadership score of +2 for determining the cohort’s level. Apart from the minor hiccup, an evocative, interesting feat that is a great way to have good guys fight good creatures for once, without jeopardizing alignment.

-Blood of the Fold: +4 to Knowledge-checks to identify good or evil extraplanar creatures and entities; +6 if you have 10+ ranks in the appropriate knowledge skill. You can qualify for this via Eldritch Heritage and the celestial bloodline.

-Celestial Pushback: Evil creatures failing to save versus your channel energy are subject to Bull Rush, with CMB equal to cleric level + Cha-mod. This does sound very powerful, looks broken, but is actually less useful than you’d think: The good alignment means that the creature with this feat will be channeling positive energy, which makes this, via vanilla channeling, only useful versus undead…which seems appropriate. Granted, variant channeling still works, but the okay CMB-scaling still retains this as a feasible feat that’s better crafted than you’d expect when first reading it. (Though low-power groups using variant channeling may want to be careful with it.)

-Choir of the Host: Cha-mod allies influenced by Inspire Greatness gain the ability to overcome, interestingly, DR/evil, making them more potent when fighting celestials….which, according to the feat’s fluff, was NOT the intent – this should be able to grant the option to bypass DR/good. *sigh*

-Demon Hunter:1/day, gain +2 to a single attack, saving throw or SR-check versus a demon or known servant of such an entity. AT 10+ HD, this bonus scales up to +4. This is also a story-feat, though it is not properly tagged as such. To make the goal, you have to slay a named demon with HD equal to or greater than your own. The completion benefit is significant: Whenever you deal damage to a demon with a targeted spell or attack, you get a free demoralize attempt that ignores fear immunity. “targeted” should imho be replaces with “single target”, since you can otherwise cause free action AoE demoralize attempts…potentially, depending on how you handle free action limitations per round. Other than that, a cool one.

-Dimming the Light: Gain +2 to saves versus Ex and Su abilities of good outsiders in addition to your favored enemy bonuses. Okay.

-Divine Aura: This feat, based on Alignment Channel (evil), adds demoralize to channel vs. evil outsiders; allows you to exchange four rounds of shaken for 1 round of frightened. Solid!

-Find the Conduit: Add +1/2 your level to all healing you dish out. Does not apply to items used/created.

-Fires of Heaven: Spells with the fire descriptor you cast ignore 5 points of fire resistance. Odd: Does not extend to SPs…particularly since the infernal feat applied the bonus to SPs.

-Friends in High Places: 1/day add the celestial template to any neutral or good-aligned creature on the Summon Monster spell list. Works interestingly with skeletons from Skeleton Summoner, if the creature is neutral or good.

-Heaven Sent: Requires having died before. Makes you immune to fear. Basically a reskin of the revenant-feat from the installment of Undead feats. Makes me sad that such a brief book features it.

-Holy Warrior: If you wear your patron’s symbol on armor or shield, you get +1 sacred bonus to AC (+2 if both armor and shield feature the symbol). Alternatively, you get +1 to atk when featuring the symbol on your weapon, +2 when using 2 such weapons. You either choose offensive or defensive options when taking this feat; you may take it twice to get both bonuses.

-Strengthened Aura: 1/day as an immediate action, make your Aura of Good class feature duplicate circle of protection against evil (Sic! – shouldn’t that be Magic Circle against Evil?) for 1 round per level of the class that grants the aura of good.

-Strong-Willed: +4 to saves versus charm- and compulsion-effects.

-Sword of Heaven: +2 to damage versus evil outsiders. Any weapon you wield (including unarmed and natural attacks) is considered to be good aligned for purpose of overcoming DR. This does not overcome weapons with the evil descriptor and they remain evil. Can eb qualified for via Edlritch Heritage and celestial bloodline.

-Voice of Angels: While under the influence of your Inspire Courage, affected allies get +2 to intimidate checks and +2 to Will-saves versus evil outsiders and undead.

-Heavenly Mandate: When using inspire competence, he may force one target to tell the truth, duplicating basically a single-target zone of truth, that requires the target to hear him. Evocative and well-executed!

Editing and formatting is much more refined than in the last book – while there are some hiccups here, they boil down to minor glitches. Layout adheres to a clean white background with blue headers. The full-color art of the angel on the cover is reproduced inside and is nice. The pdf comes fully bookmarked, which is nice to see.

Neal Litherland, Simon Muñoz and Brian Berg have crafted a collection of feats in this pdf that can definitely be considered high-concept. While, unfortunately, there are some glitches that detract from some of these feats, sometimes even on a rules-level, the matter of fact remains that there are some evocative pieces herein. While this pdf does offer some filler, it’s not much. Better than the previous pdf, this is a nice, if not perfect collection. Hence, my final verdict will clock in at 3.5 stars, rounded up to 4 for the nice concepts and ideas herein.