Fallen Leaves Adventure Arc I – Into the White

Fallen Leaves Adventure Arc I – Into the White 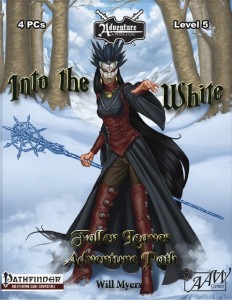 The first installment in the Fallen Leaves adventure arc clocks in at 63 pages, 1 page front cover, 1 page editorial/ToC, 1 page SRD, 1 page back cover, leaving us with 59 pages of content, so let’s take a look!

This being an adventure-review, the following contains SPOILERS. Potential players should jump to the conclusion. One important point – the party should NOT include an elf – they are not intended as a default race in this humano-centric region of Aventyr and including one can potentially complicate things, while not making the set-up impossible.

All right, still here? Great! In case you have not played the somewhat problematic prequel contained in Side Quests Volume I, the book begins with a short synopsis of the things that have happened: By planting a cursed vial, an elven agent provocateur sought to destabilize Rybalka to the point where he and his brethren could enter the town and find a missing artifact that is crucial for the elven people -Edhelgurth, the Elven Death, has been slaughtering the elves, but to make matters worse, their deity seems to be at war with the deity of drow and thus, only irregularly are the prayers answered – thus, the elves are looking for the fabled Menalpaur to help their deity – but, alas, the artifact was not where they anticipated it to be. Thus, the PCs are called by Mayor Igor to take a closer look at the prisoner and escort him – but where somewhat depends on whether the PCs have an idea or two.

Now here would be a great place to mention one component I thoroughly enjoyed about this module – since the beginning of the module is situated in the by-now well-documented village of Rybalka, the consequences of modules A4, A17 etc. have a direct influence on some encounters – from Rybalka’s Lodge to whether Diplomacy can be used to keep a mob from lynching the elf, the fact that the metaplot *may* influence the module (but can just as well be ignored) lends an organic feeling of consequences to the module one only rarely sees in published modules – kudos! And indeed, the module further goes on to capitalize on the established regions – the PCs first stop, beyond the Dark Wood, once again would be A3’s Loi’Tok – the burial mound of Vikmordere champions – provided they can survive the trek through the lethal Dark Wood and the infernal creatures within – at which point they may btw. also meet local legend Cual Beartooth once again…

Scholars or natives of Scandinavia may enjoy read aloud texts that show a direct use of Norwegian for the Vikmordere language in the read-aloud texts – btw., if that is not subtle enough, let me recommend Norse or Icelandic as a slightly more obscure set of alternatives. Anyways, the Vikmordere shaman is willing to help the PCs if they do not botch their social skills and creates a kind of protective ritual that shelters them – and again, should your PCs bear the Sun Lord’s Blade (A1), there indeed is a consequence here…and, as a nice bonus, if the PCs have not defeated the legendary Krah’Tah in A3…well, then it’s still here… The rather obscure puzzle with the original sarcophagi of the legendary lords has been changed and reintegrated into the game in an interesting way –detect magic shows tendrils of magic, jumbled and all messed up. By moving the sarcophagi, one can un-jumble the interwoven magic links and proceed – the handouts for the puzzle help visualize this and make for a nice change of pace, though I think that direct consequences for failure/destruction of multiple sarcophagi/degrees of success would have helped this puzzle. Alas, this place did not contain the artifact either and just as everyone is ready to leave, the edheliant, the savage wild elves, attack the Vikmordere and try to take the salvaged case from Myhal.

In the aftermath of the battle, separating from the Vikmordere once again, the PCs will have a chance to run afoul of a doppelgänger before returning back to Rybalka – but alas, the home away from home is currently rather…non-homey. A whole company of Klavekian soldiers is out for the PC’s skin! Stowing away, by force or stealth, on the aptly-named vessel Pelican (fully statted), the PCs have to brave the naval journey and the dread turtle-sharks of Serpent lake before arriving at Sunglor, the first of the cities colloquially called the 3 sisters. Sunglor, as it turns out, is a particularly devout city, where adherents of the Sungod have a tight rein – but from this annoying, yet relatively peaceful town, they can plan the escort of Myhal home to the Silent Forest. Drak’kal, the second of the cities, is also depicted with a full-blown map, and in spite of its more chaotic reputation, it may turn out to be more dangerous for the fugitive elf – there actually is a Klavekian military presence here…but there is also a chance to become affiliated with resistance against Klavekian monarchy here… Finally, the rather druidic, third city of Torrent, would also provide a potential point from which to journey forth.

The whole chapter here is surprisingly free-form for a published module, providing extensive read-aloud texts for all three cities, scenarios for caught PCs – all here – essentially, we have a nice, geographically limited, but pretty free-form trek here – one that ends as the PCs and Myhal set forth towards the Silent Wood – either by escaping from prison or by evading authorities, with a sense of gravitas looming over their heads, as they venture forth into the world of Aventyr…

Editing and formatting are good, I didn’t notice and undue amount of glitches. Layout adheres to AAW Games’ two-column full-color standard and the pdf comes fully bookmarked for your convenience. The pdf benefits massively from utilizing the established backdrop of Rybalka – a total of 14 pages of player-friendly maps are provided, from Cual’s cabin to the Loi’Tok and similar classic onwards to the new maps for the three sisters, there is a lot of nice map material here for you to print out.

Will Myer’s first part of Fallen Leaves feels very much like the triumphant celebration of the things accomplished and a fanfare for the hero’s journey – the PCs have made themselves a name in the harsh Rybalkan wilderness – now, they’re off to see (at least a part) of the great, wide world. Fallen Leaves’ first part left my players hungry for more and the *very* detailed read-aloud texts help GMs less adept at paraphrasing the nice fluff of the encounters. That being said, I do believe that quite a few of the set-pieces herein lose their impact if you haven’t established them before in the A-series.

I have played the modules with my players and thus, we got the most out of this and had quite a bit of fun. If you haven’t, this module’s pace may seem brisk, hurried and the hints and changed in situations may lose some of their impact. Unlike the unfortunately short prologue that somewhat squandered its investigative premise, this module managed to do well regarding the genre of a relatively free-form overland trek, a genre one only rarely sees properly represented among modules. Hence, my final verdict will clock in at 4 stars – add half a star if your group has a history in Rybalka, detract half a star if it doesn’t. Personally, I very much recommend playing A3, A4, A5 and A17 (don’t fret – that one can be played at very low levels in spite of the recommended levels – it’s almost a pure investigation…) before tackling this one.