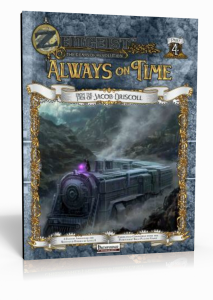 The fourth installment in EN Publishing’s so far simply superb, investigation-driven steampunk-AP clocks in at 73 pages, 1 page front cover, 1 page editorial, 1 page ToC, 1 page SRD and 1 page back cover, leaving us  with 68 pages of content, so let’s take a look!

Still here? All right! The intrepid constables of the RHC, i.e. the player characters, find themselves on a reconnaissance mission in this module – they have uncovered the presence of a shadowy conspiracy, but so far know next to nothing about them. Having investigated Caius in Zeitgeist #3, the PC’s know he would have been boarding a train in Beaumont at one end of the Avery Coast Railroad and travel its length to the city of Vendrice. Spy Missions are no easy thing, and unlike many a shadowrun mission I’ve read throughout my DMing career, here we are not left in the dark: By starting the adventure with a planning phase and providing ample options for skill checks to e.g. create false paper trails, establish cover identities and make plans for contingencies. Even risky propositions such as attempting to buy off the spies on their trail, are not off the books and distinct options – though ones that already carry a solid possibility for failure. Better yet: If your players don’t like investigations/spywork (then why are you playing this AP, though?), they can jump immediately into the operation, though at least in my opinion, the module looses quite a bit of its charm that way – especially since failures tend to not result in dead-ends, but rather detractions from the degree of the respective success of the PCs.

On the way to Beaumont by ship, the PCs will have their first hostile encounter herein – if you want to go naval combat here, I’d suggest Frog God Games’ “Fire as She Bears” instead of the standard “Admiral o’ the High Seas”-rules the Zeitgeist AP presumes. Beyond that, enough information is provided for you to run this particular encounter as a more or less straightforward hackfest. Anyways, the PCs should thus have a good reminder that their meddling has made some important people rather giddy. Thus they enter the nation of Danor.

Danor is problematic for especially casters – magic doesn’t work well within the wild/dead-magic-zone riddled nation, thus requiring some careful deliberation on behalf of the players regarding their casting prowess. So yes, the PCs will need to be smart when handling this assignment –  after all their goal is not engagement with the enemy. hence, they board, among the vast bustle of people, the train – 1st class, of course! The train and its passenger are lavishly detailed and making appropriate observations and conclusion will be hard – even before a stop in Danor’s capital Cherage makes tracking the suspects (all of which have something going on the PCs can discover) rather interesting.

On the next day, a passage through the wild lands (including a short safari-break) beckons – as doe new passengers. The city of Orithea, the next stop, will also see  complications in the PC’s espionage-duties, with interactions between passengers, many a thing to do…and a constantly ticking timer. On the next day, the constables will have a chance to thwart a train heist in a swampy terrain, with aberrations and bandits – and thankfully a nice breakdown of  locations, number of spawns and cars for the respective characters, making this encounter complex, but manageable for an experienced DM. Less than an hour after the attack by the gargantuan aberration, the PC’s adversaries are notified of them being spied upon, just as the train reaches the lands of Drakr.

Discussing the nature of conflict (and world’s end), counter-espionage by the PC’s targets, unrelated black market/espionage deals – there is a lot going on beyond the main plot – so much, in fact, that all the characters come vividly to life and can or cannot have serious impact in the future, while remaining optional for the purposes of this investigation. Still, by the end of this part, the PCs ought to know who their primary suspect is, while at the same time having met some characters that will return in future installments of the AP.

Here a massive spoiler is in order – part of the plan of teh Obscurati revolves around magical lanterns, which can draw targets throughout the planes. hence, the villain’s goal is to get the PCs in a given isolated locale and draw them into a hostile plane – In Nem, the spirit becomes the body – when no longer close to the approximation of their bodies, the PCs die. Usually, this would be no problem, but the train’s movement means that they are on a tight timer. Undead, the ghosts of the murdered – the PCs are stuck in the train’s ghost equivalent, fending off the deadly assailants and hopefully finding the lantern, destroying it before their spirits are whisked away. After this supernatural assault, the PCs ought to be VERY paranoid when they reach Sid Minos.

There, a red herring/further assassination attempt, including a cursed island with its own intelligence and copious undead awaits – along-side a chained demoness who offers one last way for the PCs to resume their work, should they have been suckered in. Then, at a private rail station, the mastermind behind aforementioned lanterns is in danger of being recruited by the Obscurati… And said interaction involves someone in the highest echelons of power…

In order to triumph here, though, the PCs will not only have to have drawn the right conclusions, they better also be up to their a-game – if they are, they may have actually gained some important allies.

The appendix depicts in detail (and with maps) the train, provides further filler NPCs and general guidelines for investigation and the tailing of suspects are provided alongside a selection of 8 magic items (one of which is a new quality) as well as a  quick-reference sheet of NPCs for the DM, a mission timeline and a nice advertisement-style handout for the scenic railroad route.

Editing and formatting are very good, though not perfect – I noticed e.g. one instance of part of a DC’s number being obscured beneath a relic and I also encountered some very minor typos/wording glitches. Layout adheres to EN Publishing’s drop-dead-gorgeous 2-column full-color standard, with artworks ranging from superb full color to comic-style mugshots to thematically fitting b/w-stock art. The pdf comes fully bookmarked with nested bookmarks for your convenience and the pdf is layered, allowing you to customize the pdf for printing it out, all according to your needs.

Zeitgeist modules are damn friggin’ complex beasts, but gloriously so – they involve a lot of moving parts, NPCs, contingencies and options for DM to get the module, proverbially, back on track. This is no exception and while the module is, quite literally, a railroad, it also is surprisingly player-driven with all the suspects, investigation guidelines, etc. allowing for a lot of outcomes, for a lot of different approaches, while always providing options for the DM to get things back on track. Sorry, I swear that was the final railway-pun. So is this a great module? Yes, yes, indeed –  author JAcob Driscoll has delivered a complex, cool investigation against a unique backdrop, one that not as complex as CoC’s legendary Orient express-campaign, but one that fits seamlessly in with the overall AP. More so than in previous installments, though, DMs should take heed to impress the investigation-focus of teh whole AP: Players seeking primarily roll-playing will eb frustrated by this triumphantly brains-over-brawns module. My final verdict will clock in at 5 stars + seal of approval – I applaud the sheer guts of deviating from the mostly combat-driven gameplay of most modules towards a rewarding ROLEplaying experience seldom seen in any d20-based system.

You can also get the 4th edition-version here on OBS!