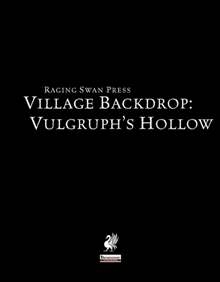 This installment of the Village Backdrop-series is 10 pages long, 1 page front cover, 1 page advertisement, 1 page editorial/ToC, 1 page SRD and 1 page back cover, leaving us with 5 pages of content, so let’s take a look, shall we?

As has become the tradition with Village Backdrops, the town herein is fully depicted with a list of notable folk, demographics and village statblock, a market place, information on the populace and local nomenclature as well as dressing customs alongside 6 rumors, some of which may or may not be 100% true…

So what is going on in Vulgruph’s Hollow? Well, first of all, the village, once prosperous, is dived along racial lines – from the ingenious dwarven founders and their descendants, not much hospitality has ever been extended towards the humans, gnomes and halflings that constitute minorities here – whether due to sheer gruffness or racist tendencies would be up to the DM to decide. Beyond that, though, the village has now, for about a year, been plagued by animal mutilations that have since escalated into downright disappearances of folk – tensions run high and in a climate of suspicion, the culprit(s) thrives.

Nestled on a river, connected by bridges to both sides, Vulgruph’s Hollow may seem easy to defend, its nearby dwarven monument pittoresk even – against this backdrop of mistrust and tension, a pair of star-crossed lovers may serve as a Romeo and Juliet-style subplot, while moderately capable (semi-) retired adventures (like a half-orc arcane duelist bard 5 or a dwarven swashbuckler rogue 7) and a lot of good folk may be only inches away from shedding blood, while the vile culprit of the crimes moves unrecognized among the populace, truly a wolf in sheep’s clothing. (And upon reading this supplement, what I mean by this will be so much clearer to you…) Said culprit also comes with full stats, btw.

Editing and formatting are top-notch, I didn’t notice any glitches. Layout adheres to RSP’s elegant 2-column full-color standard and the pdf comes fully bookmarked for your convenience and in two versions – one optimized for the printer and one optimized for screen-use. The cartography is superb and as always, player-friendly high-res versions of the maps can be downloaded on Raging Swan Press’ homepage.

Alexander Augunas, known mostly for his mastery in crunch as evidenced by his superb improvement and conversion of Pact Magic to Pathfinder, here delivers a splendid little town, concisely depicted with peculiarities galore, problems to solve and essentially multiple adventure plots that almost write themselves, showcasing a distinct ability to actually also write excellent and captivating fluff. Vulgruph’s Hollow, more so even than many other Village Backdrops, has your work cut out for you and even though the basic tropes of the threats may have been covered already, the ease and level of detail with which the narratives flow together make this an excellent buy and a fun place for the PCs to visit – provided they can solve the issues. Otherwise, they may be stranded in a settlement imploding upon itself as paranoia escalates into bitter violence. Final verdict? 5 stars + seal of approval.

You can get this awesome village here on OBS and here on d20pfsrd.com’s shop!