Treasures of NeoExodus: Claw of Xon 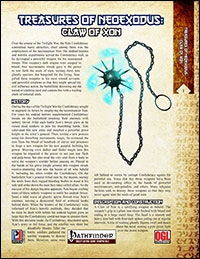 This installment of the Treasures of NeoExodus-series is 4 pages long, 1 page editorial/SRD, leaving us with 3 pages of content, so let’s take a look!

A legacy of the legendary dread necromancer and war-criminal Xon, these heavy flails are made from a new special material, so-called Blood Iron. This material deals an additional point of damage to bleeding foes and multiple attacks may sicken the victims of the dread ministrations on a failed save. Furthermore, the weapon may repair itself or cure its owner’s constitution damage.

Rules-wise, the weapon is a +1 wounding blood iron heavy flail that makes stealth impossible – the howling of tortured souls emanating from it also shakens all foes around it, though, offsetting this huge penalty. The lack of a save versus the shaken condition might be considered problematic, though. Those slain by it have their souls bound within the weapon and the dead can be conjured from the flail as shadows under the control of the wielder.

The pdf also provides us with item-cards.

Editing and formatting are very good, I didn’t notice any significant glitches. Layout adheres to LPJr Design’s full-color two-column standard and the artwork is awesome, as we’ve come to expect. The pdf comes with a second version that is slightly more printer-friendly and the pdf  has no bookmarks, but needs none at this length.

This is a solid, evil item that lacks any subtlety – I don’t like that the new material has a fixed DC and there have been installments in the series with slightly cooler abilities, but generally, this is a solid product and well worth a verdict of 4 stars.

You can get this weapon most foul here on OBS!