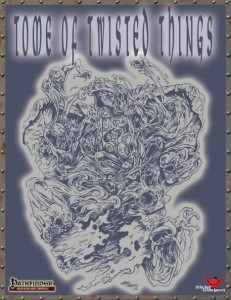 We kick this pdf off with the Darkborn-PrC – essentially a character who opts to take the wickedness into him/herself, slowly becoming the monster they ought to destroy – in the words of “The Dark knight” -either die a hero or become a monster. The PrC spans 10 levels and ofefrs d10, 4+Int skills per level, 3/4 BAB-progression, 7 levels of spell progression and medium ref-saves. Unlike many other PrC, this class comes with a fighter/melee-centric alternative that offers full BAB-progression, but no spell-progression. Rules-wise, darkborn get a wickedness-pool of 3 x HD. Which brings me to two concepts – wickedness and purity: When the Darkborn uses his/her Darkweaving ability, a non AoO, non-touch SU with range, both s/he and the victim wager purity versus wickedness-points and the creature that wagered less is afflicted with the darkweaving. While said points do regenerate, they don’t do so particularly fast, so a poker-face is helpful indeed. From exiled outsiders to walking on spiritual shards of glass to damage bonuses and negative energy damage, the 8 different effects truly are intriguing and fit thematically well with the PrC. On the downside of the doomed hero-angle, the PrC exudes a seductive draw – every level may see the hero slide closer towards the evil they seek to combat and an alternate rule may even make taking class-levels in other classes harder… Darkborn also learn to suppress darkweave effects that affect them, detect evil and undergo at later levels essentially an evil outsider apotheosis. Oh…and the capstone…you better quit before the capstone, for it has you transform into a truly vile monster, consumed by the darkness – of course, the lure may prove to be too great and still see you become an NPCs, perhaps even the final villain of the campaign? (And yes, there is an optional rule to avoid this depressing fate – but honestly, I think I’d omit that one – I’m into bleak, dark endings. Still, its presence is awesome!)This PrC does a great job at handling the doomed antihero-concept very well and while the purity-score determination may be a bit extra work for the DM, the formula is easy enough to do it on the fly – so all in all: One superb PrC!

The next class we get herein would be the Avenger, an alternate take on the Paladin that is not restricted in their alignment, gets no spellcasting and channel negative energy. Being all about revenge, they learn to place marks on designated prey and deal more damage (cha-mod) versus foes that have injured him/her. Foes designated as targets of this retribution also heal the avenger by cha-mod whenever he manages a crit versus the target. The avengers also learn so-called reparations – effects in addition to retribution, which come from a wide variety of selections that scale up over the levels and the class also nets auras that extend powers to the avenger’s allies, allowing them to provide bonus damage to allies helping them with their revenge. They also learn to imbue their weapons with weapon qualities and finally, as a capstone, their get a kind of semi-apotheosis with DR and max negative energy channeling and all and their prey becomes almost impossible to resurrect.  Again, a quite awesome class-  the avenger makes for a flavorful, cool, alternate class!

Third among the offerings herein would be the Ruiner, who replaces touch of corruption with the option to supplement the damage dealing spells he casts with additional damage and may also thus increase the damage dealt via channel energy as soon as s/he gain it. At 3rd level and every 3 after that, the Ruiner may choose a Ruin, their replacement for cruelties. – essentially, being all about pain, they are focused on dealing painful and bleeding wounds, penalizing foes’ saves against pain and yes, they may even negate morale benefits with their dread auras. A deadly, cool concept for an avatar of the blackest, most destructive nihilism. Neat!

The Tyrant PrC offers d10, 4+Int skills per level, full BAB, medium fort- and will-saves and essentially is a non-good, extremely lawful and honorable, but potentially twisted individual, fuelling his power with conviction (of which he gets 2+cha-mod +2 per class level): Tyrants are specialists of demoralization and may even demoralize the mindless and later even use conviction to prevent foes with a readied action to attack them – this is AWESOME! Stacking dominate person effects on the demoralized and smiting chaos to finally become a larger than life sovereign of his/her own domain, this PrC could have easily been a lame anti-chaos-borefest and instead proves to be a rather cool little PrC, albeit one that could have used a tad bit more  versatility.

We also get a new race with the warped -offspring of mortals and eidolons, these folks replace the attribute modifiers of their base-race by +2 Con, +2 Wis and -4 Cha, get darkvision 6o feet, are treated as aberrations for effects and spells (but don’t gain the benefits of the type) and get an evolution pool of 1 + 1 for every 5 character levels. Said evolutions follow their own distinct rules, preventing e.g. the skilled evolution from becoming overbearing. Only 1 and 2 point evolution are eligible and transforming costs a full-round action that provokes AoOs and leaves the Warped sickened – and is limited to the amount of times per day it can be used.”We should wait before returning to the city, gotta get rid of that claws…wait, the paladins are around the corner?? Oh damn, better scram…” While they may Disgusie self as if not having any evolutions, still – quite some roleplaying potential there! They also get +4 to saves versus polymorph and +2 to Knowledge (planes) and Intimidate. A strong race, yes, but their social stigma should make sure that they remain a balanced and cool option. Two thumbs up!

We also get 2 new archetypes – the Bloodborn Summoner , a racial archetype of the Warped, who prepares spells as a witch, substituting his/her eidolon for a familiar and uses the magus’ spell-list as well as Int as governing attribute. However, the eidolon is also changed: d8, -2 Wis, Int and Cha and 1/2 str and dex-bonuses over the levels. In order to unleash the eidolon, the summoner has to cut himself and let the beast gush forth from his/her wounds – interesting concept, especially since the archetype allows the warped to slowly partially ignore the restrictions imposed on their own mutable forms. We btw. also get 4 favored class options for the Warped.

The second racial archetype for the Warped herein would be the Monk of the Flowing Form – these monks blend their own shifting powers and natural weapons with the training of the basic monk-class. Again, a compelling, neat little archetype!

Finally, we get 20 feats, one of which is a story feat and one campaign trait – the feats per se are cool, offering e.g. synergy for avenger and rogue-builds, cavalier/avengers, more options for darkborn and even more tools for the warped. Whether by evoking the Lex Talionis (“An Eye for an Eye”), adding judgments to retributions, swearing dwarven blood oaths or fueling your meta-magic with wickedness – the feats one and all work rather well and even a feat the offers synergy between noble and Tyrant-classes is provided – overall: Kudos!

Editing and formatting has traditionally not been Little Red Goblin Games’ strongest suit. Since their imaginative, intriguing campaign setting Necropunk was the first indicator on what they can do, I’m happy to report that the team of editors Dayton Johnson, Christina Johnson and Jeremiah Zerby have done a great job here – apart from the fluff-text in a couple of feats not being italicized and similar inconsequential nitpicks like “immediate reaction” instead of “reacting with an immediate action”, I have the pleasure to report that LRGG have not stepped down from the level they’ve reached with Necropunk, instead applying the vastly increased standards to “regular” publications like this. Tl;dr: Editing and formatting very good, though not yet perfect.

The book comes fully bookmarked for your convenience. Layout. OMG. With a slight purplish tint, black borders and SUPERB, original and copious b/w-interior art by Tamas Baranya and Nathan Winburn, this book is a beauty to behold and ranks simply among the finest examples of b/w-art out there – aficionados of dark fantasy tones and artworks will love these evocative pieces.

Ian Sisson, Caleb Aylsworth, Christos Gurd and Scott Gladstein have created herein the BY FAR best book in their “Tome”-series I’ve read so far – while the purity-mechanic may be a little bit clunky in the beginning and not for everyone, it is a daring design – and one that does not extend to the other classes. The variant classes capture their respective topics well, their rules-language is rather polished and oftentimes simply INTERESTING. Imaginative, daring even. The avenger especially is a cool character and probably my new go-to class to recreate Guts from Berserk. By the way: If you haven’t read this milestone of dark fantasy manga, go out there and get it NOW. (The anime is essentially btw. ONLY the extensive flashback!) Where was I? Oh yes, Tome of Wicked Things. Sorry there – this book just felt like it would seamlessly fit in one of the darkest and coolest sagas I’ve read so far and its content is overall…well, just awesome.

The new race is working surprisingly well, its restrictions preventing the “overpowered-omg-eidolon-evolutions” aspect I dreaded, while providing a great way to play a character that looks normal, but has a monster waiting just below the surface. Thematically, content fits seamlessly with presentation – from conan-style headers (with swords through letters) to the artworks to the content and we get one crunch-book aficionados of dark fantasy should not let slip through their fingers. While I could complain about the aforementioned minor glitches, that would by hypocrisy at its finest and simply not do this awesome pdf justice – The innovative ideas herein are more than enough to let one see past the exceedingly minor, almost non-existent little issues and hence, my final verdict will clock in at a heartfelt recommendation of 5 stars + seal of approval.

Congratulations to the crew of LRGG – if this is what we can expect from them now, then start saving and keep an eye on them, ladies and gentlemen!

You can get this cool supplement for darker campaigns here on OBS!