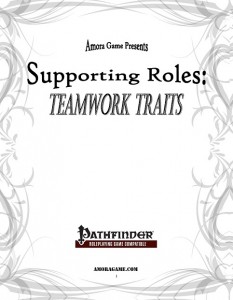 This pdf is 4 pages long, 1 page front cover, 1 page editorial, 1 page SRD, leaving us with 1 page of content – so let’s take a look at those teamwork traits!

So what are these teamwork traits? Essentially, they constitute a subset of social traits – essentially netting either you, your allies, or both a bonus. A Total of 11 traits are provided:

–Armed Together: Works only in conjunction with another ally taking the trait: 1/day, you may act on your ally’s initiative count for one round. Your initiative does not change and you may only use it if you haven’t yet acted in this round. I assume that activating the trait is not an action or a free action, but clarification here would be nice.

–Competitive Friendship: When challenging an ally to do the same task you just performed, you grant that ally the aid another bonus to all rolls associated with the task. This one’s overpowered – challenging is not an action (at least the pdf fails to specify it), the trait has no limit on how often it can be used and the “task” is ill-defined – would e.g. hitting a dragon constitute such a task? +atk +damage? Why not simply use the aid another-rules with all its limitations instead?

–Follow my Lead: Allies following in your wake through difficult terrain do not incur movement penalties. Cool idea, but needs a limit – otherwise the lead character could “clear” difficult terrain until his first ally passes through – why is there no “ally needs to be adjacent to you”-caveat?.

-Jealous of your Rival: Select a rival: Whenever said Rival fails an atk, save or skill check and you witness it, you get a +2 trait bonus to your next d20 roll. A good idea, but one that imho also requires a daily limit to be considered balanced.

–Working Together Makes the World Go Faster: When working with an ally who also has this trait, you and your ally add your Profession skill checks together when working for money and then each take half of the gold pieces. So what’s the benefit? You earn just as much as before, just average it out! Many groups pool their resources. So why invest in this trait? Also: Does this assume a 7-workday week or a 5-workday week? Not sure this works as intended…

Editing and formatting are good, though not flawless – there’s e.g. an instance of “some time” being written together. Layout adheres to Amora Games’s two-column b/w-standard and the pdf has no bookmarks, but needs none at this length.

I HATE reviewing trait-books. They usually (though not always) are BOORING. Not so this one – quite the contrary in fact: By focusing on teamwork, these traits provide some rather iconic, cool options and foster friendship in and out-game, making for neat roleplaying catalysts – and they generally are well-crafted… With some exceptions. And yes, you can fix the balance-issues immediately and without a big fuss, but still – they are there. This pdf has 5 star + seal of approval potential, but as long as the at times overpowered, at times flawed components are in here, I feel myself unable to rate this according to the verdict it would deserve – with the flaws, I can, at least for now, not go higher than 3 stars on this one and hope for a revision soon.

You can get these traits and lend a hand here on OBS and here on d20pfsrd.com’s store!